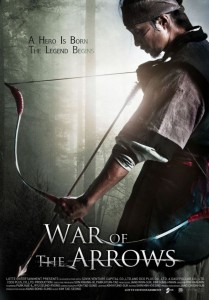 Personalizing history by focusing on the children of a Korean traitor, we follow Nam Yi (Hae-Il Park, The Host) and Ja-In (Chae Won-Moon). Receiving a family bow and a message for the elder brother to look after his younger sister as he would a daughter, they both barely escape certain execution in Seoul. Fast forward 13 years and Ja-In is getting married despite her older brother doing everything he can to prevent it. As the wedding nears, Nam Yi wanders off and notices something out of the ordinary on the horizon: a Chinese army heading for the castle where his sister is getting married. Forces clash, people die and Ja-In and her would be husband are kidnapped. Barely escaping with his life, Nam Yi acts on his pride and uses his skills as a hunter and a master archer to track down his sister and kill those responsible. The resulting conflict may be a pointless waste of life, but at the same time it is representative of how the Korean people grew and developed as a tiny nation surrounded by three massive, wealthy and powerful nations. The bow, which is still a national icon, completes this cycle of Korean history and the honour that comes with standing up to insurmountable odds.

During this invasion, the first use of the on screen caption is used a somewhat anachronistic trope to adopt in a historical and non-documentary piece, which begs questions as to what the director is trying to achieve; is he trying to bring a greater awareness of Korean history, or is he trying to create meaning in the senseless loss of life? Nevertheless Han-min Kim has ingrained the Korean psyche and their people’s subjugation into the film, a subjugation that is only briefly touched upon; this is not Come and See or City of Life and Death, as entertainment is the indisputable aim.

Ironically for such a historical piece, it only plays a role in the first act and a small part of the second with the film. The value of the War of the Arrows comes from the cat and mouse chase in the second half, which sees Nam Yi being tracked down by a Chinese specialist squad after he consistently makes a mockery of the invading force’s lesser members. This is where the significance of the arrow comes out of the Korean historical subtext and becomes the primary tool used in the action sequences.

Traditionally the bow and arrow is used for long distance battle sequences as a means to thin out numbers before getting close and personal with each other to hack off bits with swords and the like. The way they are used here is unique: the bow is used as a primary weapon, which presents many set-pieces or shoot-outs where a frenetic energy akin to 1980s John Woo is employed. Where other films lose meaning in the shaky camera work, here it adds energy to express the weaknesses of Nam-Yi, emphasizing that he is just one man as he is pursued through the beautiful sparse forests, which are a cinematographer’s dream. When a face to face battle is necessary, the pace calms down and the tension of the hunt kicks in, waiting for the other person to make a mistake. This unpredictability adds another unique angle to the chase – it’s not just about the cat preying on the mouse, as sometimes the mouse strikes back. Even if one of these incidents is cheapened by a terrible CG tiger, the constantly shifting power dynamics exhilarate more satisfyingly than seeing limbs and innards being splayed as per genre expectations.

War of the Arrows has its share of problems, of which the resolution being negated by neglected characterization and the aforementioned captions stand high. Mercifully these problems are relatively minor. Hae-Il Park is a brilliant leading man and there’s an imperfection to the cast that makes them infinitely more interesting than their well-travelled archetypes. Han-min Kim has implanted the Korean lifeblood into The War of the Arrows, a unique and consistently entertaining historical epic.