Over the past few years, Starz has made its mark on the tv landscape with numerous shows, from Spartacus to Party Down. Their latest series, from Breaking Bad writer Moira Walley-Beckett, delves into the world of ballet dancing. Titled Flesh and Bone, the miniseries explores the world from the perspective of the people associated with the American Ballet Company, and while there are some strong ideas and themes presented, the series unfortunately fails to develop them effectively.

The season’s focus is on power and control, most notably the type that is exerted over women by men. The effects that control has over different characters is by far the most compelling aspect of the season, starting from Claire’s attempts to get out of the control of the men surrounding her. This begins with the hold that her brother Bryan has over her, which she tries to break by taking control of her own sexuality via Sergei’s strip club, then continues with Paul and Sergei. Watching Claire try to break free of these influences, with the season-ending “no” cementing how far she’s come, is very compelling, aided in large part by Sarah Hay’s excellent work in the role. Hay is particularly skilled at conveying emotion non-verbally, which is put to full effect in the series.

Of course, Claire is not the only one whose control is examined, as the stories of both Jessica and Mia are interesting to watch. Seeing Karen try to juggle her expenses with the American Ballet Company’s expenses, and be eventually forced to give Sergei all the concessions he demands for fear of not having enough money, makes for an intriguing exploration, particularly in how Karen seems to bend backwards to justify essentially handing over financial control from her husband to Sergei. In many ways, her circumstance remains the same at the beginning of the season and at the end, only it’s her job and the ballet company on the line and subject to Sergei’s whims, rather than her daughter’s private school tuition. Similarly, Mia’s late-season struggle with MS and what it means for her life now tackles the theme from a new perspective that makes it interesting. Mia going from willfully having ballet control her life to MS controlling her life despite her best efforts is portrayed well, both by the show and by Emily Tyra. Other aspects of the show, like Kiira desperately trying to hold on to her position as prima, where she has control, to ensure she doesn’t get forced into the role of mother, where she’ll have no control, and Paul forcing the dancers to miss their Thanksgiving transportation so they’ll have no choice but to attend his party, further build on this idea. 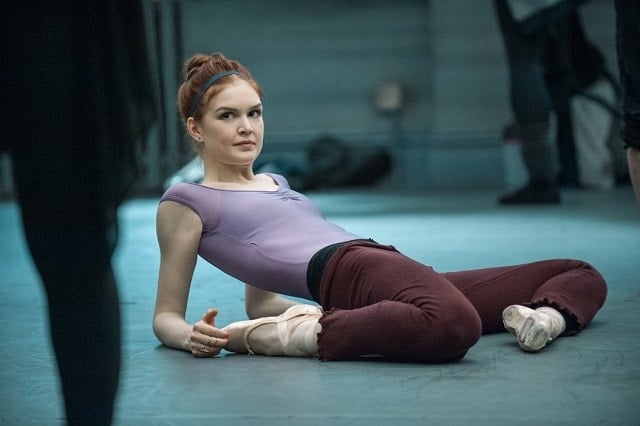 Unfortunately, however, while the series presents these themes and they’re interesting to see, for the most part, there’s very little follow-through to examine the effects that this power and control has on the characters. Mia’s MS diagnosis, and her subsequent suicide attempt, end up as subplots, and her attempts to try and dance again in her hospital room end up being the last time the character appears onscreen, with no resolution of whether she comes to terms with this turn her life has taken, or if she falls into the throes of suicidal depression once again. In addition, Mia’s near-rape sexual encounter with Bryan is pushed aside as well, resurfacing only when she has flashbacks whilst with the stranger in the club bathroom. In addition, Jessica bringing Sergei onboard, and the ramifications of this action, is also pushed to the side, with only the brief encounter between Sergei and Paul, as well as Daphne’s reaction, showing any indication of how this idea might backfire. The same goes for the control Paul exerts over the dancers. While his abandonment issues are touched on in the story he tells about his foster parents, his exertion of control over Ross, followed by his undermining of Trey at the party, seem to serve no real purpose, as the character motivation behind both actions does not come through at all, instead simply making Paul seem egocentric to the point of self-destructiveness, a character trait that is not only borne out in his other actions, but which is not balanced out by any degree of talent that would indicate why he continues to be employed by the American Ballet Company.

Perhaps the most glaring example of Flesh and Bone‘s frustrating nature of presenting intriguing ideas but not following through on them is the character of Romeo. Over the course of the season, it often goes back to Romeo, seemingly establishing him as a key character in the lives of Claire and Mia, but doesn’t explore his mental illness or thought process in any meaningful way. His novel and his visions are presented to Claire and Bryan, but what he means by any of them, and what leads to his interpretations, is never explored, and neither are his other personality traits, like his habit of writing pages by hand and putting them in bottles, or his insistence in taking, then rewriting, Claire’s copy of The Velveteen Rabbit. His disappearance for large parts of the season is understandable, as he’s not part of the ballet company and not heavily tied to either Claire or Mia, but his one major action of the season, the killing of Bryan, does not have any real impact because the audience has no sense of who Romeo is and how this action affects him. His motivation for the killing is unclear, as he hints to Claire that he’s aware of Bryan forcing himself on Claire, but the way he addresses Bryan during his first stint in New York City undermines this. In addition, how he feels about Claire never solidifies, so whether he thinks he’s helping Claire by killing Bryan, or whether he’s killing Bryan to prevent some larger evil, similarly remains unclear.

These are just some of the key issues with the series. Another troubling problem is the squandering of Tovah Feldshuh, who gets one of the least developed characters to play in the whole series, giving a total of perhaps ten lines through the whole season in a waste of the performer’s talents. Speaking of performer’s talents, the show doesn’t take advantage of the fact that its cast is comprised of dancers until the final episode, where it puts on a show. This has the unfortunate effect of making the casting selection feel more like a stunt than a decision motivated by artistic reasons, as the snippets of dancing that is displayed during the season leading up to the finale do not add to the story in any way, and aren’t focused on long enough for viewers to understand and admire the skill and precision on display. The season, however, does have some strong aspects, chief among which is the cinematography. Terry Stacey takes over director of photography responsiblities admirably from Adam Arkapaw, who handled the pilot, using numerous breathtaking shots and stunning uses of lighting to create several memorable images over the course of the season. The opening credits are also a collage of stunning images, showcasing the skill of a ballet dancer better than most of the episodes themselves, and the addition of Karen O’s vocals only adds to the effect. The performances are also similarly top-notch. In addition to Hay’s excellent work in the central role and Emily Tyra’s work as Mia, Tina Benko, Irina Dvorovenko, and Raychel Diane Weiner all turn in strong work as Jessica, Kiira, and Daphne respectively, giving their characters and actions more weight than the writing itself affords. Unfortunately, the sum of all these parts somehow adds up to less than a whole, leaving Flesh and Bone as, ultimately, a disappointment.