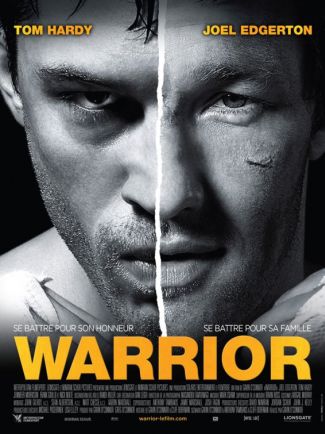 Is there anything sadder than a movie that never achieves its potential? Like a university star athlete who fizzles in the majors, Warrior is a film with a great foundation that wastes a great beginning and a talented cast with an impossible third act.

The cast is amazing. Nick Nolte steals the show as Paddy Conlon, a 1000-day sober, alcoholic wrestling coach who has alienated both of the sons he trained to be fighters. Tom Hardy brings a brooding marble-mouthed intensity to the younger son, Tommy, a former Marine who is fighting for money to send to the widow of his best friend – killed in Iraq by friendly fire. Hardy plays Tommy as an inarticulate man of deep feeling, who channels the emotions that he cannot express into his fists. While he hates his father for beating his mother, he respects Paddy as a man who can train him to greatness. To honor his dead mother (and conceal his relationship first to Paddy and later to Brendan) Tommy fights under the name Tommy Riordan. Joel Edgerton’s Brendan is the calm, articulate mirror to Tommy. A physics teacher with a wife and two daughters he adores, he is also a desperate man on the verge of losing his house. Once an unremarkable UFC fighter, he now makes extra money fighting on weekends in unlicensed “smokers”, shooting on the tough guy dreamers whose only Mixed Martial Arts experience is buying Pay-Per-Views. When he collects a shiner winning $500 from a winner-take-all MMA tournament held in the parking lot of a strip bar, Brendan is suspended without pay from his teaching job.

It is a measure of Brendan’s lack of trust in his own father that, when he decides during his forced sabbatical to get serious about MMA again, he never even considers asking Paddy for help. (There is also some simmering resentment from Paddy having spent more time training the more naturally talented Tommy when they were young.) Instead, Brendan seeks help from his old trainer Frank Campana (Frank Grillo). Campana is a bit of an odd duck. He preaches sportsmanship and respect. He uses classical music (mostly Beethoven) to help his fighters learn timing, precision and serenity. He trains his fighters to stay calm and wait for their opportunity. In a key character moment, when Brendan comes to him and asks for help, Campana immediately reaches for his wallet, but when Brendan refuses his money and asks for training help instead, Campana’s eyes initially narrow: he can afford to lend money, but has no time to spare for an old stubborn Irish fighter who has wasted his time before.

Brendan and Tommy are both men who value family above everything, after watching their family disintegrate when they were boys. The rage that fuels both men is their inability to provide for their families, for Tommy to support his friend’s widow and for Brendan to save his family’s house. The difference is that Brendan considers both Tommy and Paddy family (even if he does not trust his father around his daughters), but Tommy’s only family is the adopted family of his dead Marine buddy. Tommy irrationally believes that when his mother left home –  taking Tommy with her – Brendan should have come along, leaving behind the girlfriend that eventually became Brendan’s wife.

This is all fantastic set-up. Great, real characters with human stakes and real-life problems. The film even manages to create fighting styles that reflect the personalities of the main characters. Despite being an unbeaten wrestling champion as a teenager, Tommy’s anger has turned him into a ferociously strong striker. Brendan’s need to finish amateur fighters quickly, without taking much punishment in return, has turned him into a shooter in every sense of the world, able to turn any position into a submission attempt. Both fighters’ styles are also deceptive, revealing hidden depths. Tommy’s striking conceals his grappling past, while Brendan’s submission style conceals his ability to take a punch and keep moving forward.

The difficulty comes with the plot engine that will lure the brothers into conflict by giving them a solution to their money woes: a 16 man middle-weight MMA tournament called Sparta, held in Atlantic City, with a winner-take-all purse of 5 million dollars.

The first problem is that Gavin O’Connor directs the tournament fights with the same herky-jerky, extreme close-up style that he uses to film the claustrophobic dynamics of the Conlon family. The film generally feels like it was the result of a Nick Nolte bet that he could emote more with just his nostrils than most actors could with their whole body. (A bet Nolte would win by the way.) This is fine when the film is studying the facial crags of Hardy, Nolte and Edgerton out of the ring, but in the tournament O’Connor’s allergy to medium shots makes it impossible to figure out how the fighters are winning or losing.

This is a problem.

Especially because we really want to see the fights, particularly the ones involving the “unbeatable” Russian Sambo champion, Koba, played with frightening intensity by Kurt Angle. Even if Koba executes more power-bombs and suplexes in one tournament than the entire sport sees in a year. When the UFC started in the United States, its’ first events were unsanctioned 8 men tournaments. pitting fighters from a variety of different martial arts disciplines against one another. What should make MMA perfect for film material is that the sport began as an attempt to answer the questions that had launched hundreds if not thousands of Kung Fu flicks: Whose style is strongest? (As it turned out the surprising answer was Brazilian jiu-jistu.)

Eight men tournaments work really well as a one night event and as a Pay-Per-View. You need seven matches for the tournament with an extra non-tournament match between the semi-finals and the main event final to give the successful fighters a rest between fights. The problem is that it requires the best two fighters to fight three times in one night. Part of the price of MMA becoming a sanctioned sport was giving up one day tournaments.

If one-day, 8 man tournaments are no longer possible, Warrior‘s two-day, 16 man tournament is even less likely to be sanctioned, especially in New Jersey. The State Athletic Commission would also be unlikely to approve a winner-take-all purse. The increase from 8 fighters to 16 feels like padding in the film as well. Its main purpose seems to be to allow room for out-of-ring plot between the first day of the tournament and the second.

(Just as a scheduling problem, 16 man tournaments are impossible. The film suggests that the first night has 12 matches which would mean at least a 4 hour event, while the second night has only 3 matches – barely more than an hour.)

Complaints about the impossibility of the Sparta tournament may seem like nit-picking, but they are evidence that the filmmakers don’t understand or care to understand the current reality of MMA and fighting sports. This is a problem because sports films exist on a plane of heightened implausibility built on reality. When you ignore reality, you make dramatic implausibility completely impossible.

Beyond this point, in order to properly explain where the film goes wrong, we will need to discuss key elements in the film’s plot. In other words, beware, HC SVNT SPOILERS, Here There be Spoilers.

Between the first and second day of the Sparta tournament, the film makes two huge blunders. First, it has Paddy Conlon fall off the wagon in such a way that Nick Nolte is essentially eliminated from the film, sidelining the film’s strongest actor and character from the climax.

Second, it reveals that Tommy is a deserter from the Marine Corps, having left the Marines after his entire unit was killed by friendly fire. This works dramatically, but in the context of the film, it is completely impossible that the secret could be concealed as long as it is.

It would be hard enough to conceal that Tommy Riordan is Paddy Conlon’s son and Brendan Conlon’s brother. Forget CNN. Odds are that an MMA blogger would do some quick research, figure out that Paddy Conlon had two sons who were both high school wrestlers, one (Brendan) who became a UFC fighter and one (Tommy) who disappeared. A little extra research would reveal that the maiden name of Brendan and Tommy’s mother was Riordan. Tommy Riordan’ true identity would be on the Internet within hours of his name appearing on the card.

More importantly, in order to have a fighter’s license in any US State with an Athletic Commission, especially in New Jersey, fighter’s have to allow themselves to be finger-printed. The reason for this is to protect against fighters who try to fight under multiple aliases.  Tommy Riordan/Conlon would be arrested by the Marines before the tournament even started.

As a friend of mine, Brian Dermody, remarked, “a tournament like [Sparta] you’d have to have in some wild west crazyperson cartoon world. Or Arkansas.”

The film goes completely off the rails in the final match that pits Tommy against Brendan with Military Police poised to arrest Tommy as soon as the fight ends. First, the film changes the format of the fight from 3 rounds to 5. This is normal for MMA main events, but by not explaining the change, the film creates false drama in the third round of the fight, particularly since all of Brendan’s previous matches have left him needing a knockout or submission in the 3rd round to win the fight. (There were audibly puzzled audience members during my screening of Warrior when the fight continued into a 4th and 5th round.)

Worse, Brendan actually does win the fight in the 3rd round, popping Tommy’s shoulder out of its socket. When Brendan tells his trainer Campana this, Frank snarls back, “Pop his other shoulder!” This is not just wrong, it is a complete betrayal of Frank Campana’s character. A trainer who preaches sportsmanship and respect for one’s opponent, one who has built his career and his fighter’s careers on finding a calm centre, would never snarl like that. More importantly, he doesn’t need to. If Tommy’s shoulder is dislocated, he can’t defend himself. All Frank Campana has to do to win the match for Brendan is have the referee ask Tommy to raise his arms. When he can only lift one, the fight is over, Brendan wins. There is no need to force Brendan to literally choke his brother out to win.

I could live with the film betraying the reality of MMA for dramatic purposes. I can not forgive Warrior for betraying the truth of the characters that it did such a good job making me care about.

If you want to see a great film about two warring brothers who settle their differences in an MMA match, avoid Warrior, find and watch Brawler instead.

Thanks to Brian Dermody and Kevin Marshall with help fact-checking this review. Any mistakes are my own.