This week, on Torchwood: We get an expodump, re:Blessing, Jilly drinks the kool-aide, there’s blood-letting all over the place, and Rex wakes up

It’s been a long and uneven season for Torchwood: Miracle Day. Everything has been building to this finale and after weeks of ups and downs, Miracle Day goes out in such a way to prompt this reviewer to disappointedly put it on the shelf with other “didn’t happen”s (such as the Star Wars prequels, the Matrix sequels, Indy 4, etc.). The payoff doesn’t justify the weeks of filler and runaround and certainly doesn’t live up to the best of Torchwood’s previous seasons. It’s an episode of exposition punctuated by a few punches and explosions, with just a dash of “Gotcha!” twists. There are no real answers given about the Blessing, other than some mumbling lip service paid to the Doctor and the Racnoss and the Silurians. If that’s what the destination is going to be, then the journey had better be pretty phenomenal, and this journey was anything but. 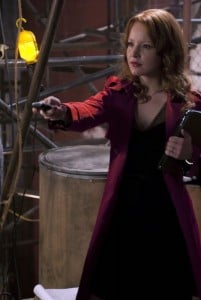 Not only does Oswald Danes prove insignificant (it could easily have been Gwen strapped to that bomb or ready to trigger a remote detonator), so does Jilly (though apparently she can keep up for a while with Gwen in a fight?). None of the main villains do anything particularly of note over the course of the season, besides speak ominously and obliquely, and even Esther does nothing of interest in the finale, besides act as a hostage. Rhys is sidelined all season and while PC Andy’s appearances are welcome, he is wasted as well. Gwen doesn’t change over the course of the season at all. Rex changes by the end, but let’s not even start on the absurdity of that development, and for a character so desperate to hold on to life a few episodes back, Jack is happy to throw his away here. The very little time spent exploring the relationships of these characters have been poorly executed, on the whole, and much of the development of the past seasons has been forgotten. Jack, willing to sacrifice his grandson when push came to shove in Children of Earth here isn’t sure if they should sacrifice Esther? It’s ridiculous- it not only makes Jack weak, it trivializes the end of CoE.

Though Gwen is given a few strong moments, all of which Eve Myles knocks out of the park, the majority of the script is groan inducing. The previously mentioned “Gotcha!” moments are particularly frustrating. The “The blood bags were just a red herring!” reveal would feel a bit forced, but acceptable if we hadn’t been treated to an earlier scene of Rex and Esther discussing how important they are (when no one else is there to overhear them). No one knew that they had them- who were they planning to fake out? Also, why did Jack and Gwen need to think they were dead? They weren’t communicating with the CIA or anyone who could possibly be a mole, so how could it hurt to clue them in? Lastly, to go a bit Whovian for a moment, shouldn’t the Doctor have a better idea what the Earth is made of than the Families, considering he saw its creation? He seemed to think the main thing at the center of the planet was the Racnoss. And the Blessing is more powerful than the Time Vortex? Not only does this finale manage to undermine the end of Children of Earth, it does the same to “The Parting of the Ways”, the series 1 finale of NuWho. 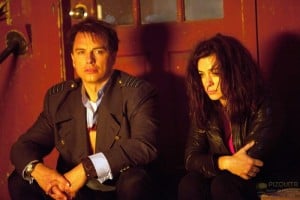 One of the major strengths of the season has been Lauren Ambrose as Jilly Kitzinger, but here she’s over the top and hammy. Bill Pullman continues to overact as Oswald Danes, though to a lesser extent than in his earlier appearances (until his last scene, at least). Mekhi Phifer never rises above ordinary, which is frustrating considering he is usually a strong, charismatic presence, and Alexa Havins leaves little impression in the finale. Eve Myles, however, once again proves herself a talented and incredibly likable actress; it would be great to see her break out into more high-profile roles. John Barrowman does his best with what he’s given, and Jack’s take down of Danes is particularly strong, but there is only so much he can do with this script.

The episode ends with a clear setup for a potential season 5. The Families reveal through Blue Eyes Guy that (once again, “Gotcha!”) the Blessing is also a red herring and their evil plot for World Domination is still on. Rex somehow gains immortality, so either Jack’s blood is magic after all, contrary to everything we’ve seen on Torchwood so far, or the Blessing is intelligent and powerful enough to pick someone to turn immortal (for funsies! For hilarious season 5 hijinks! To keep Torchwood strongly tied to America!). Not all of Miracle Day has been a waste. There have been some interesting, thought provoking, fun, and kick ass moments, but taken as a whole, the season has been an utter disappointment. Starz has indicated that they only have interest in a fifth season of Torchwood if creator Russell T Davies comes up with another concept he’s interested in exploring, as he did in Children of Earth and Miracle Day. Many speculate that this means a continuation of Torchwood is at the least a few years away, if any will happen at all. Earlier this summer that would have been a disappointment. Now, pardon the pun, it feels like a blessing.

What did you think of “The Blood Line” and Miracle Day as a whole? Drop a line in the comments!