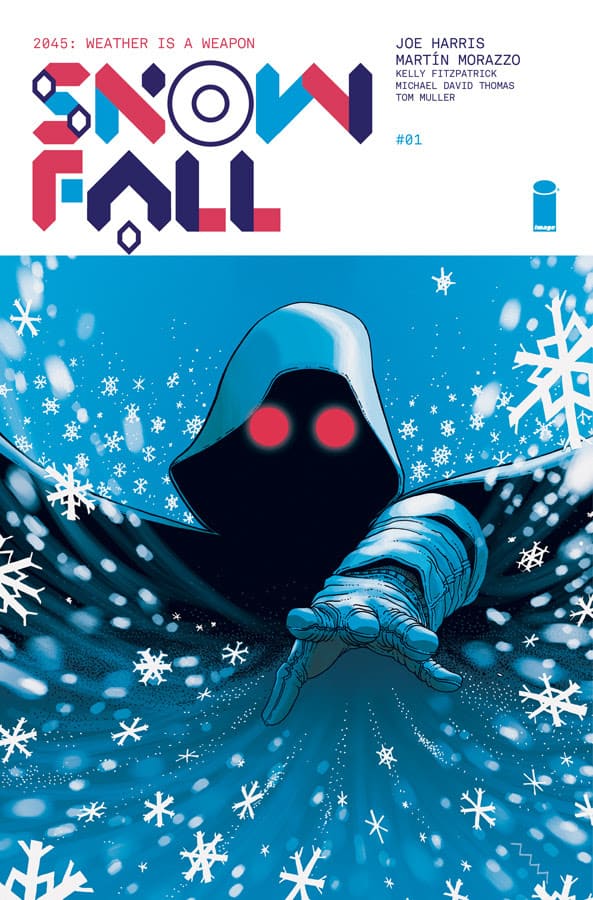 A number one issue is a tough thing to figure out, especially when building your own world as Joe Harris and Martín Morazzo are doing in Snowfall #1. The balancing act between setting up your story and characters, while maintain the mystery and intrigue that will draw them back for issue two is maybe one of the most difficult things to do in comics. It’s an art form in and of itself. Does Snowfall #1 succeed as a first issue? In some ways yes, in others not as much. However, I will say that the concept itself does hold some promise. As we go through this review, sometimes I’ll have moments where you’ll see my throw something in parentheses. These are generally me interjecting with qualms I have about the story.

From the cover, I assumed this was a sci-ffi centered book. This was reinforced with a “recap page” of sorts that informed me of the status quo the book was working with. We’re about 40 years in the future, in 2046, and the damage humans have done to the climate of the Earth has forced them to relocate into “resettlement zones”. The lawlessness that followed was only stymied by the establishment of the Cooperative States of America, backed by the Corporation Hazeltyne. So we’re functionally working a semi-post-apocalyptic world that is ruled by what seems to be a puppet government, and weather doesn’t seem to work right anymore. 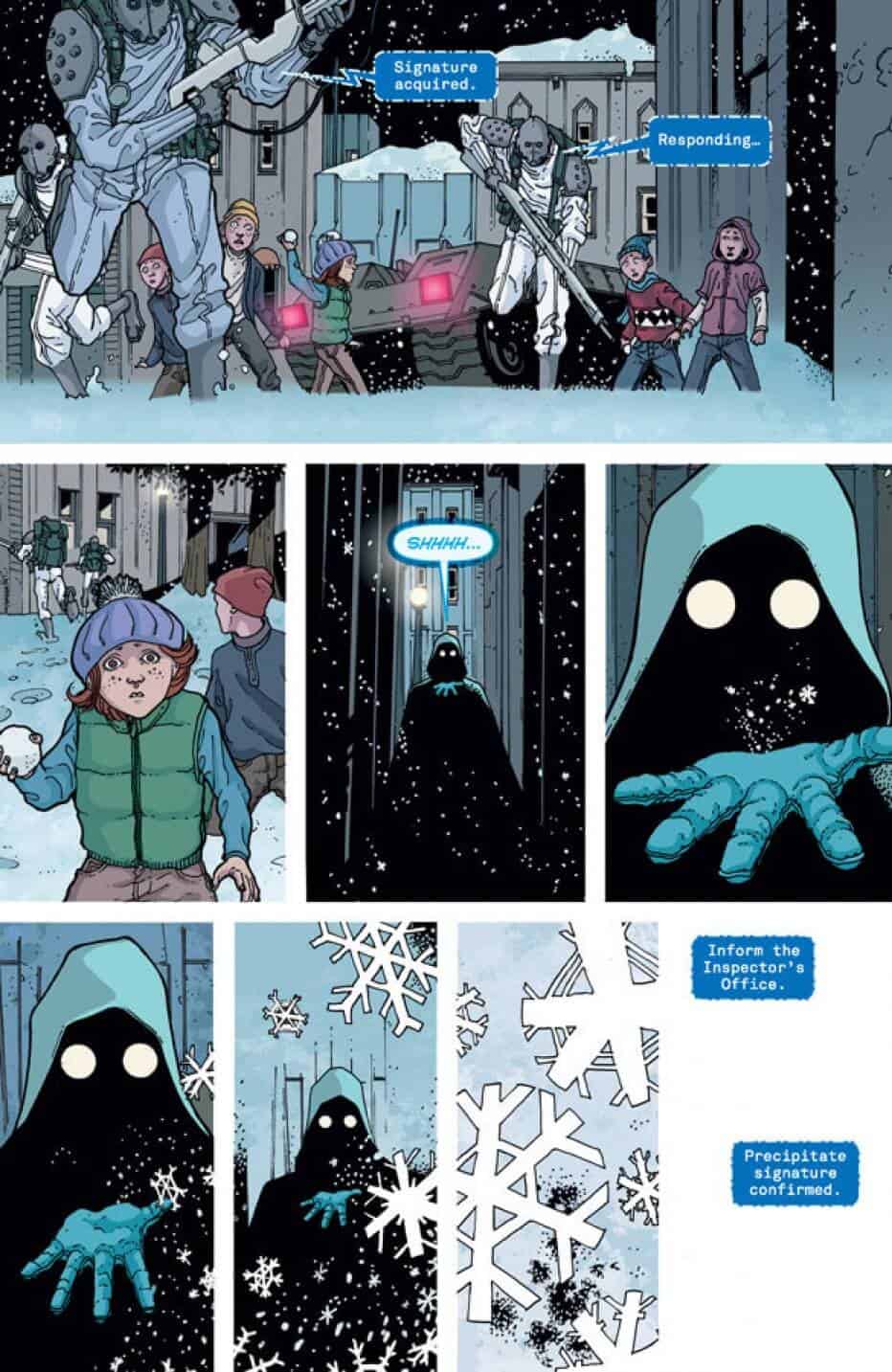 We see out first glimpses of the White Wizard.

Oddly though, the story starts with a series of limited imagery overlaid by a set of almost fantasy-style captions (well designed by letterer Michael David Thomas by the way). This threw me off at first, thinking “wait, is this some kind of science-fantasy book?” However, following this page of captions about a sleeping girl we jump to a scene with a town covered in snow and what seems to be a bunch of military personnel searching for something or someone by gauging the percentage of “precipitate. There are kids playing in the snow and suddenly a hooded man shows up in and somehow produces snow from his hands. This is our intro. A bit vague but it seems to set up the aspect that someone is producing snow, and that’s not okay, and the government is hunting him down.

Next we jump back and forth a scenes of the soldiers (who incidentally look a lot like Ghost from Thunderbolts) and a classroom scene. The classroom depicts a professor explaining to students the history of the climate breaking down and how amending the constitution to allow corporations personhood had saved them all. This had brought about the Cooperative States of America suspiciously not mentioning Hazeltyne. As the professor speaks in captions over the action, the hooded figure, whom we now see has a pencil mustache, uses his snow powers to start damaging buildings to defeat the soldiers. We see them get caught in rubble and then we switch completely into the classroom.

It is here that we are introduced, about 8 pages into the story, to the person whom I believe is the main character. We don’t get much regarding his character outside him clearly being counter-culture. Upon leaving the classroom and a teacher looks at him through what seems to be robot eyes and says to the class that they’ll be watching their progress very carefully, though it seems to be directed at the student leaving. Is the professor a robot? Does he just have robot eyes? Who knows. It’s not explained.

We then see the kid running away from the classroom, bumping into people, half apologizing, and then telling them to not go to class and running away. As he runs away, we FINALLY get the first name check in an actually balloon, and we learn his name is Anthony Farrow.

Next we jump back to the snow-covered resettlement, where a scary inspector from the cooperative states has shown up. Interspersed over the next few pages are panels with slightly different coloring that are flashbacks. Now, on my first read-through, I didn’t realize this initially, which was confusing. While the coloring does something to differentiate them, because of the nature of the color palette on these pages, it’s tough to realize that they are flashbacks. The inspector also gives us info about a man called the White Wizard, whom most people think is a myth but is real and is basically an eco-terrorist according to the Inspector. He hasn’t been seen in ten years, but this attack occurred on the anniversary of his last appearance.

See also  EIFF 2014: 'Hardkor Disko' is an incendiary film about a disaffected generation 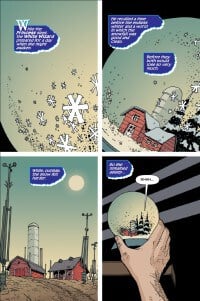 Back to Anthony listening to a report on the snowfall and looking over some maps. He learns of a place on them that no one has lived for ten years and goes directly there. We suddenly return to the fantasy captions on this page as we see a farm and a snow globe that is an exact replica of the farm. Someone puts the snowglobe back on the shelf, shushing it. This, in combination with the captions about a sleeping girl, seems to indicate whoever’s snowglobe this is has something to do with this mysterious woman. This mystery is one of the better aspects of the book and does drive me to want to know more. Arriving at the farm, Anthony tries to speak with the man inside. His creepy mustache implies that he is probably the man in the hood we saw earlier. Anthony accuses him of being the White Wizard and will not leave. Anthony then decides to instead try to ram his car into the farm, but his car is run off the road by some freak cold weather and what seems to be the hooded man.

Anthony slowly wakes up, tied up and covered in wires, and we see the old man in an “evil scientist” getup. He admits to being the Wizard and we then see that the wires are hooked to the back of Anthony’s head which lets him view his memories on a screen. How this technology works? I have no idea. It looks like he has to clamps attached to the back of his hair. This tech is somehow damaging Anthony, but through his pain he tries to convince the Wizard that he isn’t there to cause him any harm and had somehow learned the true history they don’t teach in school. Then we hit a point that makes no sense. Somehow, we see a memory of a box on a chair, the professor reaching down, and then the building exploding. Anthony was not there for any of this so I’m not sure how he had these memories. While Anthony seizes on the floor, the Wizard learns that his earlier attack and killed some of those children. He freaks out, and we leave the book with him silently staring (I think he’s supposed to be yelling) at the ceiling and Anthony lying in a puddle of his own drool while the TV reporter claims this attack with only make the cooperative stronger.

So definitely some good points and some bad points for Harris. The tech aspect continued to bother me throughout. The clothing and people looked very similar to modern day people, but some seem to random have implants or high level tech that lets them do incredible things. And then none of this is explained. In sci-fi, this frustrates me a bit. At least name the stuff. While we’re talking about naming stuff, I understand wanting to slowly reveal your characters and give their introductory moment gravitas. But I feel as if I spent most of this story knowing the name of maybe one character. While 32 pages is decent for a first issue, at times it felt like there were wasted panels and pages. Do we need an entire page showing the kid driving up to the farm and walking to the door? If jump cuts were used well there, you could compress these and give you more space for more pertinent story elements. What I will say about this book though, is that I am definitely interested in this White Wizard and the thin line this book seems to be drawing between magic and technology. 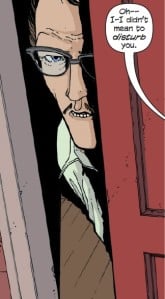 One of my favorite panels. Great line work, inking, and coloring.

On the art front, Morazzo can be a little inconsistent. Some the pages feel a bit rushed, but often times those are the pages that have limited action or feel less important to the story. It is very clear that when he spends time on a page or even a specific panel, he can do some incredible line work and great work on his inks when creating shadows. I hesitate to use this comparison, but when he is really on, Morazzo’s work can take on a bit of that Quitely feel that artists like Chris Burnham have been so successful aping. At this point, his facial work seems more advanced than his body work, but I definitely think there is talent and potential here. Possibly my favorite aspect of the book was Fitzpatrick’s colors and how well she intertwined with Morazzo’s art. Her chosen palette fits the tone of the book and the style of Morazzo’s art perfectly. Additionally, her work with shadows only compliments Morazzo’s inking to make for some really beautiful panels. Thomas’ lettering is solid, especially in making those “fantasy style” captions feel distinct from everything else. At times I could use tails a bit more, even if they were just off panel. I appreciate the floating balloons when someone is confused or waking up, but in certain situations, tails could drive home some aspects of the story that might be confusing.

See also  ‘Rat Queens’ #13: Mage U is Candy-Coated with a Danger-Filled Center

Overall, I think Snowfall #1 was a solid issue. There were some bumps in aspects of the story, but there is definitely potential in the concept and the team. We do not have the entire structure of the world and hierarchy laid out for us like we do in some comics. And maybe that’s for the better. It makes you want to know what this tech is, how is he making weather, who is Hazeltyne, etc. Harris and the rest of the team have done a decent job generating interest in issue #2.