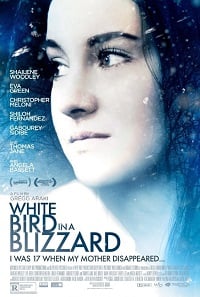 Just in case the title wasn’t enough of a hint, White Bird in a Blizzard provides enough ponderous dialogue and artsy flourishes to reveal itself as the pretentious mess that it is.  Unsure whether it’s an indie mind-screw or a conventional potboiler, Blizzard splits the difference, interspersing clumsy dream sequences with a laughably-predictable mystery plot.  This film actually seems determined to squash any chance for dramatic tension.  On that count, at least, it succeeds wildly.

Shailene Woodley continues her reign of terror with a third lackluster offering in 2014.  In contrast to Divergent and The Fault in Our Stars, she gets to play a bad girl in White Bird in a Blizzard, though the results are similarly mediocre.  Things start with a 17 year-old Kat Connor (Woodley) recalling the day her unstable mother, Eve (Eva Green), disappeared without a trace.  This comes as no surprise, really, given how much Eve despises her milquetoast husband, Brock (Christopher Meloni).  Try as they might to re-create a ‘50s suburban utopia, the Connor household is gripped by the type of simmering resentment that always bubbles to the surface, usually with devastating consequences.

Much like her mother, Kat is a physical creature.  She just recently stoked her sexual appetites using the dimwitted boy next door, Phil (Shiloh Fernandez).  Sexually frustrated with her inept husband, Eve regards the hunky Phil with a mixture of revulsion and curiosity, which calls into question just how involved he might be with her disappearance.  Kat also has an ill-advised infatuation with the older detective (Thomas Jane) investigating Eve’s case.  Kat’s sexual predation is the only thing that saves Blizzard from becoming a complete bore.  Sadly, much like all of the other story components, Kat’s promiscuity is little more than character detailing that never amounts to much.

Working from the novel by Laura Kasischke, writer-director, Gregg Araki, does his best to distill the literary into the cinematic, but he can’t overcome the uninteresting nature of the material.  Simply put, we’ve seen all of this before in much better films.  He tries to implement an effective visual style—the unbearable whiteness of Kat’s dreamscape—but this only serves as a jarring contrast to Kat’s drab existence.  This makes for constantly shifting tones and begs the question of what Araki was trying to accomplish.  Is Kat going insane, or is this just an awkward attempt to jazz up an otherwise humdrum story? 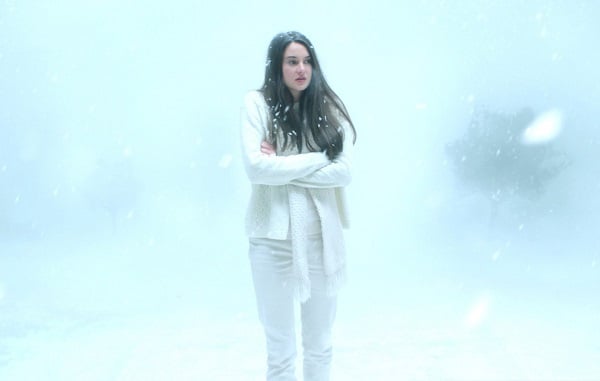 All analysis of the dialogue can be summed up in the following passage: “My parent’s marriage was like a long drink of water from a frozen fountain, so cold it turns your teeth into diamonds.”  Yes, that is actual dialogue, and, no, it isn’t an isolated incident.

The lethargic plot doesn’t twisted and turn so much as it staggers drunkenly toward an inevitable conclusion.  Seriously, there are episodes of Scooby Doo, Where Are You! with better surprise endings than White Bird in a Blizzard.  The problem is that the filmmakers try so hard to preserve the surprise that they undermine their entire story.  They have to keep key elements secret; elements that might have added much needed character depth or provided some semblance of thematic underpinning.  Worse still, if you’ve managed to stay awake until the end, chances are you’ll be yelling at the screen, as everything is revealed in the most anti-climactic fashion imaginable. 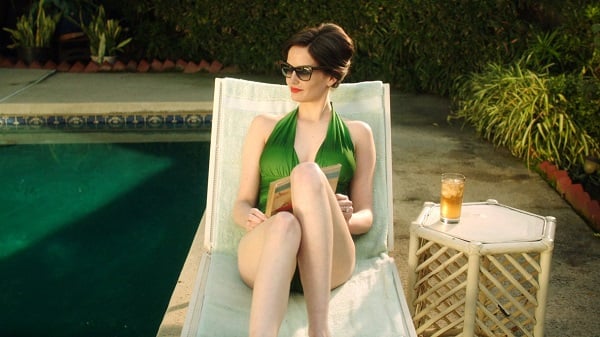 If the film has one bright spot, it’s the dizzying performance of Eva Green.  Channeling a precarious mixture of Bette Davis and Joan Crawford, Green is a livewire of raw sexuality.  She may seduce you or she may kill you, perhaps at the same time.  Regardless of her campy energy being wasted on such dull and humorless material, Green continues to assert herself as the most delicious female villain in Hollywood.

It’s hard to imagine what audience will enjoy White Bird in a Blizzard.  It’s too racy for the YA set and too tame for adult audiences.  The art-house crowd will sniff out all the pandering, while general audiences will find it too boring.  Ultimately, it’s a movie trying so desperately to be artsy and mysterious that it leaves out all the interesting stuff.  In the end, it’s hard to find a reason why we should even care about the resolution.