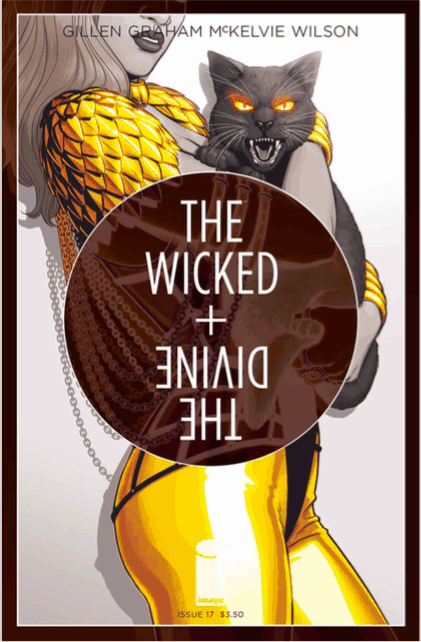 If it wasn’t obvious before, the “Commercial Suicide” arc of WicDiv is about the personal tragedies of the Pantheon members. If the first half was about misogyny, it seems like the second half is about the personal choices of women. This becomes fairly obvious in the final issue of the arc, which is about Sakhmet.

From the opening page of a child named Ruth in the British Museum crying while looking at a statue of the goddess Sakhmet, claiming that the goddess doesn’t have feelings because she’s made of stone, we immediately know just what the Sakhmet of the Pantheon is about. For the third issue in a row, the question of do the Pantheon know which member they’re going to be based on their life choices comes into play. If it’s not obvious now, it certainly is when Ananke asks a homeless Ruth a few years later if she would rather be a dog or a cat.

Outside of those flashbacks and the casual bomb drop that is the backup story, the issue plays out mostly as a day in the life of Sakhmet, who is one of the gods we haven’t really seen much of so far. Waking up at 11:30 in the morning surrounded by naked and sleeping revelers, she is watched over by the Valkyrie Eir, who informs her that Baal wants her at noon. Baal is not amused by Sakhmet’s laziness as he trains for the “armageddon” that Ananke warned them about. With a swift motion, she proves that she doesn’t need to train and decides to sleep until she’s ready to perform that night.

In an arc filled with interesting and varied artists, Multiple Warheads creator and Island editor Brandon Graham might be the most interesting choice since his style is so vastly different compared to the other artists, filled with soft lines and colors. At first glance, it may seem kind of juvenile, but there’s such an easy and fluid sexuality to his work that it’s hard to imagine anyone else drawing this issue. From the languid way Sakhmet declares “Wake me up when it’s time to be perfect” to her red hot performance filled with the specters of cats, Graham’s Sakhmet oozes sexiness with the ever so subtle hint of sadness at every turn.

Like the other gods, that sadness is one that she’s not very open about. The reader is only given hints of her life, with her declaring that she is “no one’s misery porn,” which seems to make a more subtle statement of the treatment of women and tragedy in pop culture than what  WicDiv#13 was going for. In that way, Sakhmet seems to the other side of the coin from Tara. She rather enjoys her godhood and embracing her status as a symbol of sex and death, but only because its better than the alternative. As Ruth, she is nothing. As Sakhmet, she can choose to feel nothing.

Of course, as she eats a man assumed to be her father alive, you have to wonder how much there is truth to that nothing feeling. Perhaps Woden with his encouragement of her drinking to keep her from being more dangerous to others and herself when sober causes the side effect of not feeling a damn thing. Sakhmet may look like Rihanna, but the moment where Woden hands her the bottle and the brown liquor on her chin washes against the red blood has echoes of ‘Chandelier’ by Sia, a song that was initially meant for someone like Rihanna or Beyoncé. Though, ‘Free The Animal’ may be a more apt choice for Sakhmet.

The main story of the issue closes with a drunk Sakhmet serving as a sentry for Morrigan. Besides her body language as she passes out surrounded by cats, Graham also knocks it out of the park on lettering, with a fancier script emphasizing her drunk and slurring state of speech. It’s weirdly charming in a very sad, drink to numb the emotional pain way. Graham’s take on the Morrigan is also gorgeous and it’s a tragedy we don’t get to see more of her as she reveals she just might have a way out of Woden’s cage. 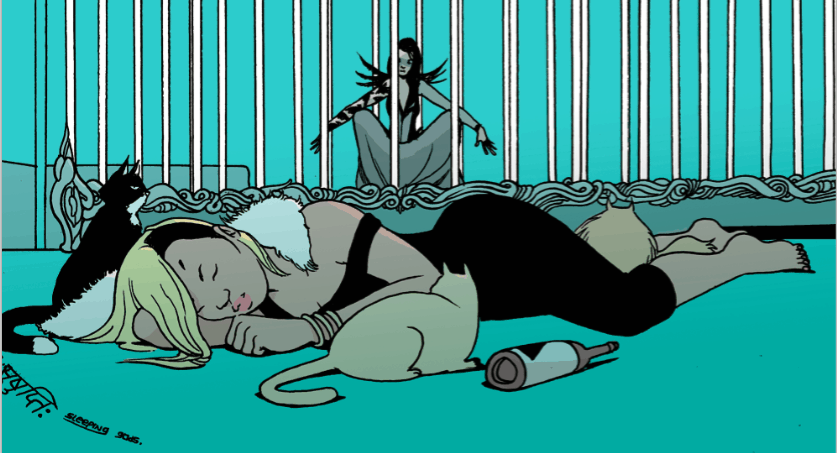 Of course, it wouldn’t be the end of a WicDiv arc if it didn’t end on a massive cliffhanger courtesy of Gillen, McKelvie, and Wilson. This one is so casual that an entire fandom may just lose their minds over seven words on a notepad.

As the end to the “Commercial Suicide” arc, WicDiv #17 is like the goddess it is focused on. Sexy, languid, and tragic, Gillen and Graham deliver a story about Sakhmet that is just as layered as she is, showing that there is more to her than just being a cat goddess. Now the question remains is can we wait until April to find out what happens next?