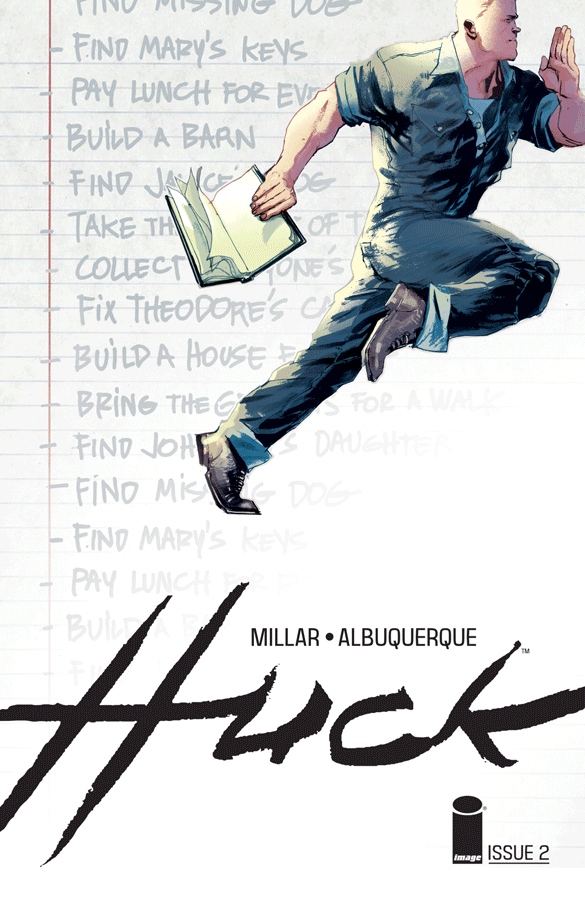 After a nefarious opening sequence set in Cold War Russia that sets up another superpowered character and a possible adversary for Huck, Huck #2 shows the onslaught of media attention after Huck rescued some kidnapped girls from Boko Haram in Nigeria. But even though this soft-spoken and intellectually disabled young man is shaken up by the horde of people surrounding his adopted mother’s house, Huck spies a sad woman and is off to do three more good deeds. Writer Mark Millar continues to show Huck’s good and helpful heart despite the circumstances, including the media and possible fallout from a Cold War era Russian scientist. Artist Rafael Albuquerque excels at showing the ease and grace of Huck’s movements as he crosses the country looking for a family’s dad and goes to Afghanistan to rescue another family’s brother, who is being held captive by some terrorist. He makes Huck a gentle giant in a similar way to how Tim Sale drew Superman in the seminal and equally as wholesome Superman: For all Seasons miniseries.

Colorist Dave McCaig is good at giving each scene the right amount of light to gauge its tone from the deep red of the Soviet sub that Miss Jones is using her abilities on in the opener to the shadows that surround the journalists around Huck’s house and on a lighter note, the pure blue of the skies as Huck does his first good deed. And it doesn’t hurt that Albuquerque’s art resembles a canvas painting using a blur effect when Huck is in motion so his art isn’t as static as Alex Ross or Adi Granov’s. Towards the end of the issue, he frames most of his panels in close up to show the threat of terrorists about to behead an American contractor versus Huck’s usual day. Albuquerque’s lines thicken in an intense double page spread that has Huck lifting a car like Superman on Action Comics #1. And then he checks to see if the terrorists are okay after securing the American soldier. He is kind and always in control.

Huck’s international superheroics is the polar opposite of the anti-heroes Millar wrote in The Authority or even Captain America’s interventionism in the Middle East in Ultimates 2. He uses his strength to help people, not act as an extension of public policy, and Millar steers him away from the American exceptionalism at the root of Silver Age era Marvel heroes, like Iron Man, whose early stories in Tales of Suspense read like anti-Communist propaganda as he fought caricatured villains, like the Mandarin. Huck has amazing gifts, like super strength, a kind of bloodhound-like tracking ability, and super leaping like Golden Age Superman, but he also has restraint. And he shows this restraint in taking out the terrorists non-lethally while protecting the person he is rescuing by shielding him with his body. This is is the complete opposite of Mrs. Jones, who puts a little kid to sleep, when he interrupts her rapt viewing of the news reports about Huck because she has abilities as well, probably some kind of telepathy.

Even if the narrative gets darker around the edges with the introduction of Mrs. Jones’ connection to a probably evil Siberian scientist and the general media storm, Huck #2 continues to be a study in optimism for Mark Millar and Rafael Albuquerque. Huck continues to help ordinary people in extraordinary ways even if he is surrounded by news choppers and random people. At this point, Orlov doesn’t quite fit into the story and is a throwback to Russian villain trope, but Huck #2 more than makes up for this slight hiccup  with evocative storytelling, a hopeful tone, and the introduction of tension in the plot for this exemplary hero.