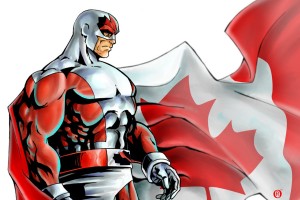 Captain Canuck is one of the most popular Canadian comic book superheros. Created by writer Ron Leishman and artist/co-writer Richard Comely, the series is described as a cross between Captain America and Flash Gordon. Like most independent comics, Captain Canuck’s adventures have been published sporadically. However, he has built-up a strong cult following among both Canadian and American collectors, thanks to some lavish hardcover reprints from IDW Publishing in San Diego.

According to the LA Times, Richard Comely, the co-creator claims that the comic is now stirring interest as a film project, and is in talks with a Canadian production company to film a $15 million movie featuring the super hero.

Nothing is yet confirmed and there is still a slight chance the movie may not be made. Movie deals are common in the 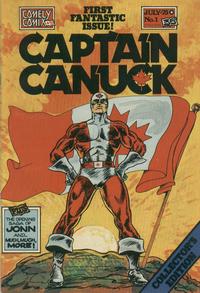 comic field nowadays, but most deals fall through.

It’s unclear which Captain Canuck would even appear in the movie since the character had many incarnations in the comic series. Apart from the original 1975 run, Comely launched a second version in 1993, under the banner of Semple Comics and later in 2004, a third incarnation edited by Comely but written and drawn by brothers Riel and Drue Langlois.

I find it hard to believe that if this project does get off the ground, studios will be willing to spend 15 million dollars on it, but I must admit, it would be nice to see a Canadian superhero film.