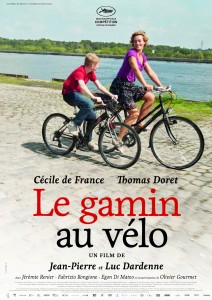 The Kid With A Bike

Written and directed by Jean-Pierre Dardenne and Luc Dardenne

When we talk about modernism in cinema, we are talking about filmmaking that acknowledges the medium as part of the storytelling, a melding of form and content so that the images on screen portray not just actions but interior psychology and moral quandaries. Keeping that in mind, it is hard to deny that the Dardenne brothers are among the most distinct and influential modernist filmmakers today. It seems unlikely, but the Belgian duo’s – who have been working steadily since the late 1970’s – mark can be felt in the visual fabric of a wide array of recent movies, from Derek Cinafrance’s Blue Valentine to Gavin O’Connor’s Warrior. With films like Rosetta, The Son, and The Child, the Dardennes pioneered a groundbreaking visual style based on virtuoso use of handheld camera that sticks tight and close to the faces of characters as they move through space, holding them in the frame even as the highly choreographed action descends into the chaos of the moment. The focus is usually impossibly short, blurring the world around the central figure, placing them strictly within the limitations placed upon them by family, society, and themselves. 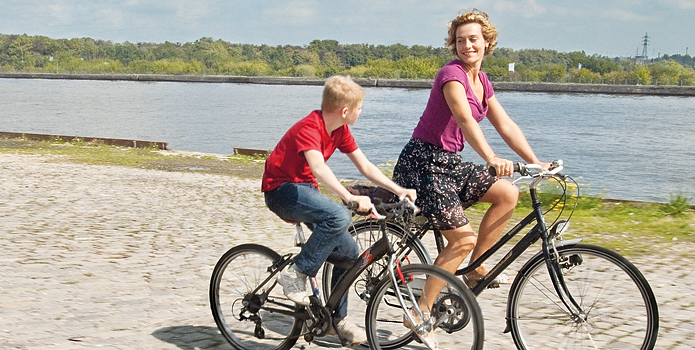 In The Kid With A Bike, the newest Dardenne bros. film, the camera is more restrained that it has been in earlier films. The frame is more stable, less instructively intrusive, and overall the look is statelier, which may make it less cinematically rich than previous efforts, but no less emotionally devastating.

The opening shot of the titular kid, Cyril (played by Thomas Doret, who is the latest in a long line of superb child actors the Dardennes have discovered), desperately trying to reach his father on the phone. Despite being told repeatedly that his father has left him for good, leaving him a ward of the state, Cyril clings to the illusion that his father loves him with an almost unshakable stubbornness. He flees the orphanage, returning to his father’s old apartment, only to be told once again that his father is long gone. When social workers and the police finally track him down in a medical clinic waiting room, Cyril continues to resist, literally pulling Samantha, a hairdresser played exquisitely by Cecile de France, into the picture. Cyril wraps his arms around her, and as the other try to pull him off, she whispers to him, “You can hold on, just not so tight.”

Samantha agrees to become a part-time guardian to Cyril on the weekends. Why she does this is never made explicit, but there are more than enough hits to Samantha’s motivations in de France’s face – she does it because it is the right thing to do. The Kid With A Bike is a film about abandonment and cycles of abandonment. We see Cyril rejected by those who profess to love him, by those who should love him, time and time again. When Samantha helps Cyril track his father down, it ends with an impossibly heart-breaking scene, with the father literally cutting himself out of the frame – and thus Cyril’s life – by shutting the door. Later, a gang leader who has recruited Cyril violently pushes him away after a botched robbery, revealing just how selfish his earlier extensions of kindness really were. 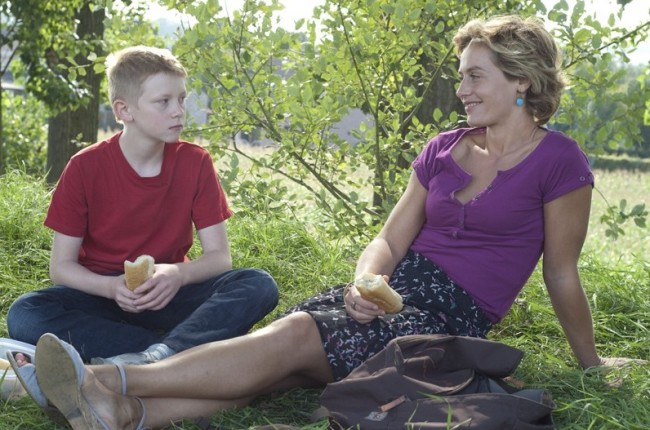 The confusion all this breeds in Cyril’s mind leads to violent outbursts aimed at other kids, and at Samantha, who he tries as hard as he can to push away.  Doret is a slight child, but he has a surprising athleticism and imbues Cyril with a ferocity that earns that character the nickname “pit bull.” The only time we ever really see Cyril at peace is when he is on his bike – the last symbolic piece of his father the boy has left – filmed in motion in beautiful, long tracking shots that show his determination to keep moving, even if he is not sure where to.

The film is not just Cyril’s story though, but one of larger socially importance. The Dardanne’s are concerned not with just one boy’s abandonment and rescue, but with how turning from those who are most in need of love weakens the social fabric. It is only through Samantha’s own stubborn insistence on sticking with Cyril, on taking his blows and helping pay for his crimes, that the boy is able to take responsibility for himself and his actions and to point himself towards a sense of acceptance and home. With The Kid With A Bike, the Dardenne’s have continued their distinctly modernist update of the morally committed cinema of Dryer and Bresson.