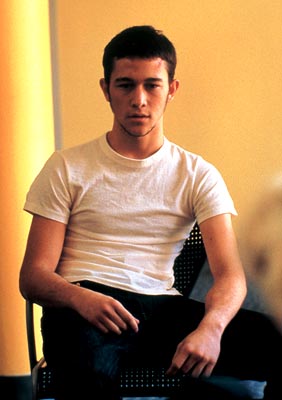 Joseph Gordon-Levitt might only be 30 years old, but he has already distinguished himself as an actor with a wide range. Beginning in commercials as a young child, he made his film debut in 1992’s Beethoven, but it wasn’t until 1996 that he became a household name, co-starring in the television sitcom 3rd Rock from the Sun. After a hiatus during which he attended Columbia University, Gordon-Levitt left television for film acting, and ever since, his career has continued to grow year after year. Levitt has been one of my favourite upcoming actors of the past decade, starring in some of my favourite indie films. Of course there are many reasons to love JGL. I could mention his gorgeous slanted smile, his dark wavy hair or his noirish and intense eyes – I mean, this dude even looks hot in drag (see above photo). But with that said, lets instead focus on his film career. Joseph Gordon-Levitt re-teams with his Brick director as the lead in Looper, a man sent back in time to kill himself. Yes, to kill himself. While speaking to Cinematical a while back, Johnson explained the movie’s plot:

“Looper is a time travel movie, set in a near future where time travel doesn’t exist but will be invented in a few decades. It’s pretty dark in tone, much different from Bloom, and involves a group of killers (called Loopers) who work for a crime syndicate in the future. Their bosses send their targets hogtied and blindfolded back in time to the Loopers, and their job is to simply shoot them in the head and dispose of the body. So the target vanishes from the future and the Loopers dispose of a corpse that doesn’t technically exist, a very clean system. Complications set in from there. I can’t wait to make it, I’m a big sci-fi fan and it’s going to be a fun world to play in. Fingers crossed”.

I wasn’t the biggest fan of Christopher Nolan’s Inception but I think most people agree that Joseph Gordon-Levitt was a scene stealer, specifically in the zero gravity hotel sequence. What most people don’t know is that Levitt pulled a double duty on Inception, not only starring as Arthur, a member of Cobb’s team of extractors, but his production company hitRECord also contributed to a behind the scenes “dream-focused” documentary directed by Roko Belic.

Gordon-Levitt has also directed two short films. His first was the 24 minute-long Sparks (seen below), an adaptation of a short story by Elmore Leonard. The film was selected for the 2009 Sundance Film Festival as part of a new program for short films. In 2010, he directed another short film, Morgan and Destiny’s Eleventeenth Date: The Zeppelin Zoo (seen above) which premiered at two houses during the South by Southwest festival in Austin, Texas.

The Lookout is one of the most overlookeed films of 2007. The crime film marked the directorial debut by Scott Frank, screenwriter of Out of Sight and Get Shorty, and starred Joseph Gordon-Levitt in the lead role, a role that was well worth the actor’s talents.

Joseph Gordon-Levitt and Zooey Deschanel star in director Marc Webb’s romantic comedy about a man who falls head over heels for a woman who doesn’t believe in love. It’s an endearing, well-acted film that takes a conventional premise and turns it into something entirely unique. Charting the rise and fall of a destined to be doomed relationship, 500 Days Of Summer is one of the best, if not best, romantic comedy in quite some time – leaving me to continually question if it is better to have loved and lost than to have never loved at all?

Have you ever read Armond White’s review of G.I. Joe: The Rise Of Cobra? Like all of Mr. White’s reviews, it is a well written piece, and this one provides a fantastic argument that G.I. Joe wasn’t a complete mess. Sadly, it was, and White is wrong. However, JGL’s performance as Cobra Commander was so enjoyable, it somehow made the entire experience somewhat watchable. He was clearly the only actor in the movie that recognized that the film was based on a cartoon, and was absolutely fantastic, chewing up scenery left and right and clearly having a good time doing it.

p { margin-bottom: 0.21cm; } The only person in the movie that ecognizes that the movie is based on a cartoon, and is absolutely fantastic, chewing up scenery left and right and clearly having a go

HITRECORD.ORG is a project started by JGL back in 2005 which has evolved into a professional open collaborative production company in which they create and develop art and media collaboratively on the site. It is a place where individuals gather to collect work on projects together: Videos, writing, photography, music etc. In an interview with the LA Time blog, Levitt went on to describe the site as follows:

“ It’s my production company that I started, but it’s a little different from a traditional production company. I didn’t want to work just in Hollywood, I wanted to work with these great artists all over the world who are doing great work on their laptops. They don’t live in Hollywood, they don’t have those connections, but that doesn’t mean they don’t do great work. The idea was to put these projects up online on our website, hitRECord.org, and anybody can come and contribute to them. We call it an open collaborative production company. I direct things and curate things and we end up making short films, music, and art and writing”.
–

Steven Spielberg is legendary name in Hollywood and this year it seems his goal it to have every nomination come Oscar time. Forget Tin Tin and War Horse; Spielberg also has Lincoln on the horizon. The mega budget movie, which will be released in December 2012, stars Daniel Day-Lewis playing the role of Abraham Lincoln, but more importantly it also features JGL, who will play opposite Lewis as Robert Todd Lincoln. Apart from Lincoln and Spencer Susser’s Hesher, JGL will also appear in next month’s upcoming comedy-drama 50/50, directed by Jonathan Levine and written by Will Reiser. Meanwhile, he is currently on set filming Christopher Nolan’s The Dark Knight Rises, in which he plays John Blake, “a Gotham City beat cop assigned to special duty under the command of Commissioner Gordon.” This dude is blowing up, people, and my guess is he will eventually be one of the best-paid actors in Hollywood, and for good reason.

Say what you will about the strong direction of Rian Johnson, but Brick is clearly elevated by the talented Joseph Gordon-Levitt as Brendan Frye, a noir-talking California high school gumshoe forced to penetrate the elaborate ranks of the high-school social scene and find the person or persons responsible for the death of his ex-girlfriend. This was a role JGL was born to play, and I’m not quite sure this film would have worked as well with any other actor in the lead.

Gregg Araki has never been an actor’s director, but the performances in Mysterious Skin are incredibly strong especially with Joseph Gordon-Levitt’s performance. JGL delivers a haunting, uncompromising performance in this groundbreaking role, and when the film goes violently bleak toward the end, he follows, body and soul. His performance in Mysterious Skin is right up there with the legendary James Dean in Rebel Without A Cause: absolutely remarkable.