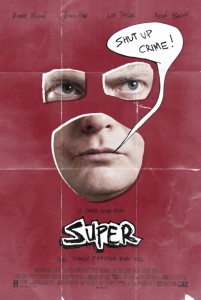 Comic Book adaptations are the bread and butter for Hollywood at the moment. Every year sees an increase in comic flicks in development and without question the most secure genre to invest in is the superhero one. In fact, it’s hard nowadays to remember a day when the superhero blockbuster was merely a rare occurrence.

It’s such big business that both major and independent production companies are choosing to churn out original superhero films not based upon pre-existing materials. It’s a cheaper, more versatile option that removes the tangled web of title buyouts and ownership and ensures the company and director can retain full control. It’s also far riskier as their is no built in fan base. This is a fact that shows up in the figures as almost every superhero film not based upon a pre-existing comic struggles to make its money back with a tiny slither of exceptions. It’s easy to see why – with too many authentic comic book movies hitting our big and little screens – why would we want to resist further exhaustion?

Well it’s unfortunate in a way that the real deal is making it hard for us to stomach any imitations as there’s a small smattering of titles that either challenge or in some cases; surpass their big brother brethren. I’m not talking about My Super Ex-Girlfriend or I Am Number Four. I’m not even talking about Sky High. Below I have compiled a list for your consideration, I present

M. Night Shyamalan foolishly followed up his mega-hit The Sixth Sense with this meticulously shot origins story. Critically loved but publically snubbed it’s by far his greatest film and is a sincere, tender, dark and powerful jolt to the superhero genre that in many ways is the finest comic book movie ever made. Bolstered by a sensational score.

For lovers of Batman : Year One

So some of you may be scoffing about now, but if you think The Matrix is anything but an unofficial superhero movie then you’re kidding yourselves. All the elements are there and are of course pulled off with great aplomb.

For lovers of most action Manga

From Pixar and the director of The Iron Giant came this CGI animated classic that remains one of the freshest, most enjoyable superhero films in recent memory and possibly Pixar’s most fun ride.

For lovers of Fantastic Four / Powers

In the 80’s Hollywood attempted to adapt Judge Dredd for the big screen. It was a long, drawn out process that saw a member of the team running off in secret to initiate a brand new franchise by ripping off the essence of Dredd but within a lawyer-proof project. The rest, as they say, is history. Robocop remains an intensely wry, violent, and emotive piece.

For lovers of Judge Dredd

One of a handful of ‘real-life’  what-if superhero movies to emerge over the past few years, Super is most certainly the most fucked up. A Kick-Ass for men in their late 30’s but taken to the extreme, it’s possibly the most shocking film I’ve ever seen rest assured – I’ve seen a lot. It’s a mess and it’s so dark as to be offensive but it’s a visceral experience that deserves to be checked out.

For lovers of Kick-Ass

I was really looking forward to Push when it first emerged but ended up feeling a little disappointed, particularly as it’s from the director of the hidden gem Lucky Number Slevin. Well on repeated viewing it’s actually a beautifully shot and fun rip-off of X-Men with a finale that’s a bit of a let down. Recommended viewing. Also – it continues Chris Evans obsession with playing superheroes!

For lovers of X-Men

So no-one like Doug Liman’s (Swingers, The Bourne Identity) Jumper, right? Well, ahem, I’m ashamed to say that I did. It’s all hugely silly melodramatic stuff but it’s the open-ended finale that really got me hooked and I’m actually kind of depressed we’ll never see a sequel.

For lovers of The Flash

I want to recommend this film despite it’s predictable plotline and short-film setup (a guy on a test drug program believes he’s developed super powers, even though we all know he’s actually just going insane). The reason being, because it’s a unique, twisted, little indie flick that does well considering its obvious low budget.

For lovers of Self-Help Books

Will Smith vehicle Hancock was a big launch in its year but didn’t rake in as much as was expected. I wasn’t hoping for much from it to be honest, but was actually taken aback by how much I enjoyed it at the time. In fact, it possibly deserves a higher ranking on this list, but for some reason Will’s smug face keeps popping into my head and I can’t quite bring myself to promote it.

For lovers of Superman / Iron Man

Fitting snugly with Super is Defendor – yet another middle-aged man who thinks he’s a superhero and adopts a cute young girl as his sidekick (of sorts). Unfocused and with a heady flavour of ‘straight-to-tv’ about it, it’s still a worthy little film with some great performances. It’s main problem is that it doesn’t seem to know what it wants to be.

For lovers of Rorschach

Find more of Al White’s work over at Movie Murmurs