Across nearly four decades and two publishing companies, the Star Wars comic book universe has seen thousands of issues chronicling tales set in a galaxy, far, far away. Following Disney’s acquisition of Lucasfilm, fellow subsidiary company Marvel reclaimed the license to publish new Star Wars comics in 2015. Along with it, they received publishing rights to all prior Star Wars comics, including those released by Dark Horse when it held the license (from the early 90s up to 2015). Now, thanks to Marvel’s digital subscription service, Marvel Unlimited, the vast majority (though not yet all) of these comics are available for subscribers of the service to read in one convenient place.

But with all those comics to choose from, and all rendered equally non-canonical by Lucasfilm, where is a Star Wars comic book novice to start? Right here, with this list of ten single issues, storylines and series from across the breadth of Star Wars comic book publishing. These aren’t necessarily the ten best Star Wars comic book stories, but rather, a sampling that provides a decent snapshot of the different flavors and tastes available amongst the vast smorgasbord of offerings. 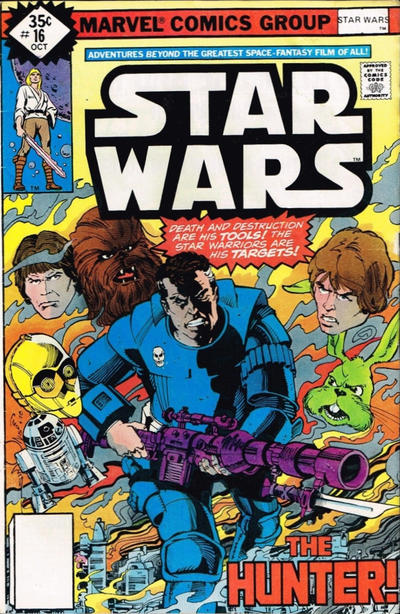 For a great taste of Marvel’s original Star Wars series (which launched in 1977 with a six part adaptation of the first film and ran until the late 80s), look no further than Star Wars #16, the first really great issue of that series. A relatively standalone tale, it introduces the character of Valance, a former Stormtrooper turned bounty hunter who hates droids, and is after Luke for having destroyed the Death Star with assistance from a pair of droids whom he considers friends. Featuring vivid, engaging art from Walt Simonson (who would later have a lengthy run on the book as both a writer and artist), it features none of the core characters from the films (though the semi-recurring and somewhat-infamous Jaxxon, a seven-foot-tall green space rabbit, does factor into the plot), but nevertheless serves as a great snapshot for the kinds of stories the series featured in its early goings, as the creators welded traditional sci-fi concepts to the still-nascent and ever-expanding mythology of Star Wars. 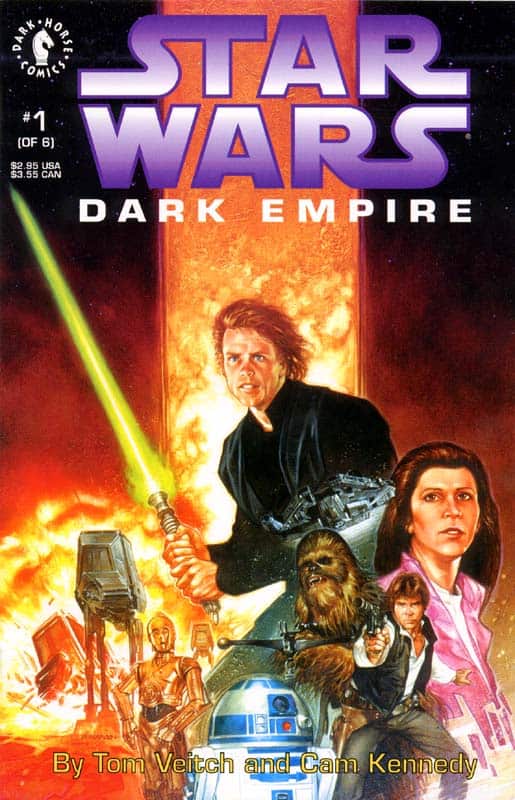 The first comic book series released by Dark Horse after acquiring the Star Wars license, Dark Empire originally began as a pitch for the previous Marvel series, and features the post-Return of the Jedi return of the Emperor in a clone body, Luke succumbing to the Dark Side with the intent of destroying the Emperor once and for all from within, and Leia having to use her nascent Jedi abilities to save her brother. Thanks to later stories (chiefly the Prequel Trilogy), much of what is suggested here about the fall of Anakin Skywalker has since been directly contradicted, but there’s still fun to be had in reading this from a historical perspective, as a relic from another time in Star Wars storytelling history, when much of the pre-A New Hope story was still unknown and creators had more freedom to fill it in themselves. Cam Kennedy’s art gives the series a European look and effectively uses color to heighten the mood and add to the story, which, when read in a vacuum (independent of the later contradictions or the direct sequels to this series) hits enough of the familiar Star Wars beats to be engaging. 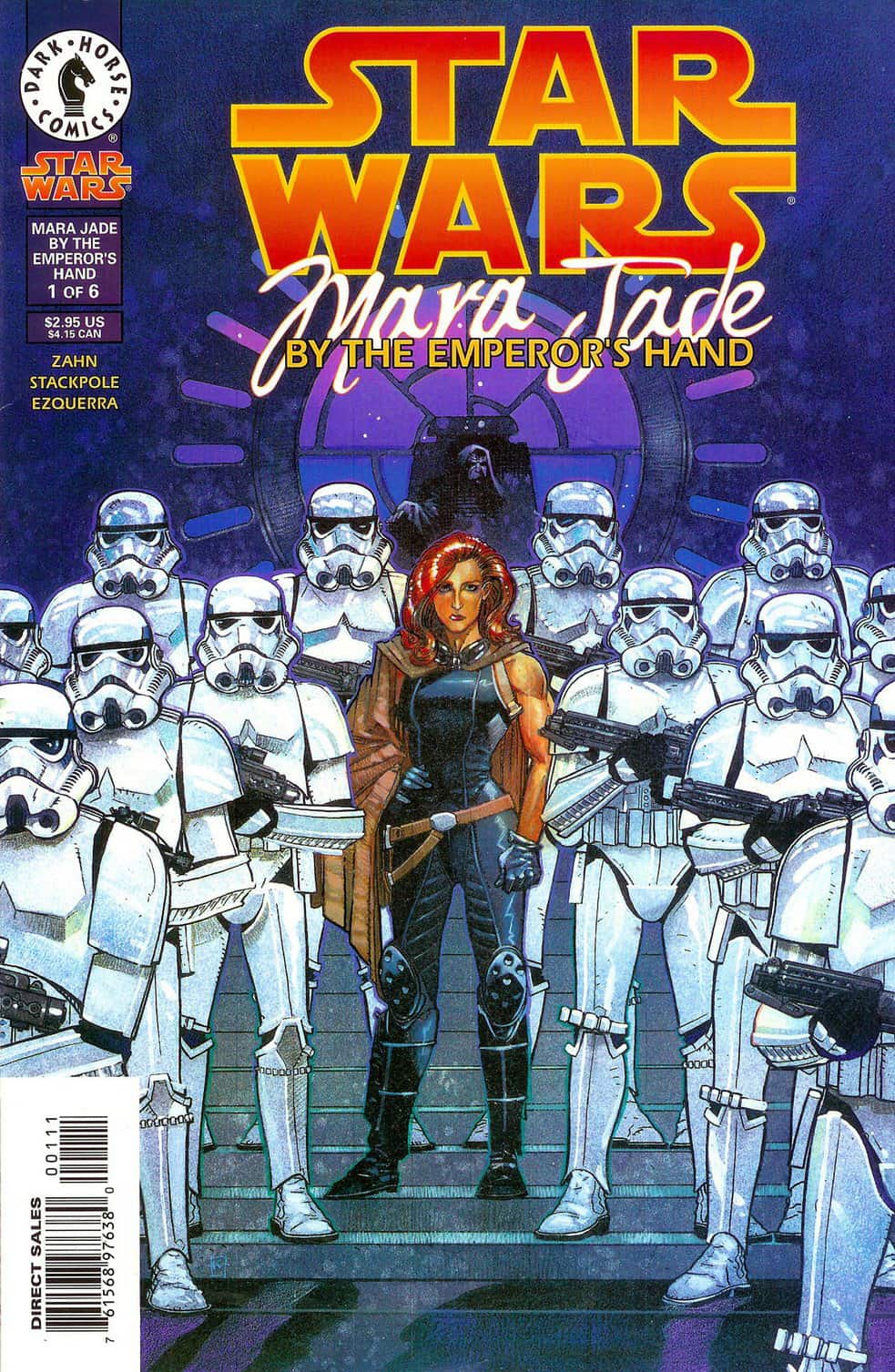 Mara Jade is arguably the single greatest new character created in the Expanded Universe, and the one character whose Legends-mandated loss caused the most gnashing of teeth amongst fans. By the Emperor’s Hand is a perfect comic book showcase for what made the character great, featuring her in her prime as the Emperor’s secret right hand woman while also teasing her later moral conflict that led to her rejecting the ways of the Dark Side, ultimately putting her on the path to heroism.

See also  Welcome to the new, bold and progressive era of Peter Parker in 'Amazing Spider-Man' #1 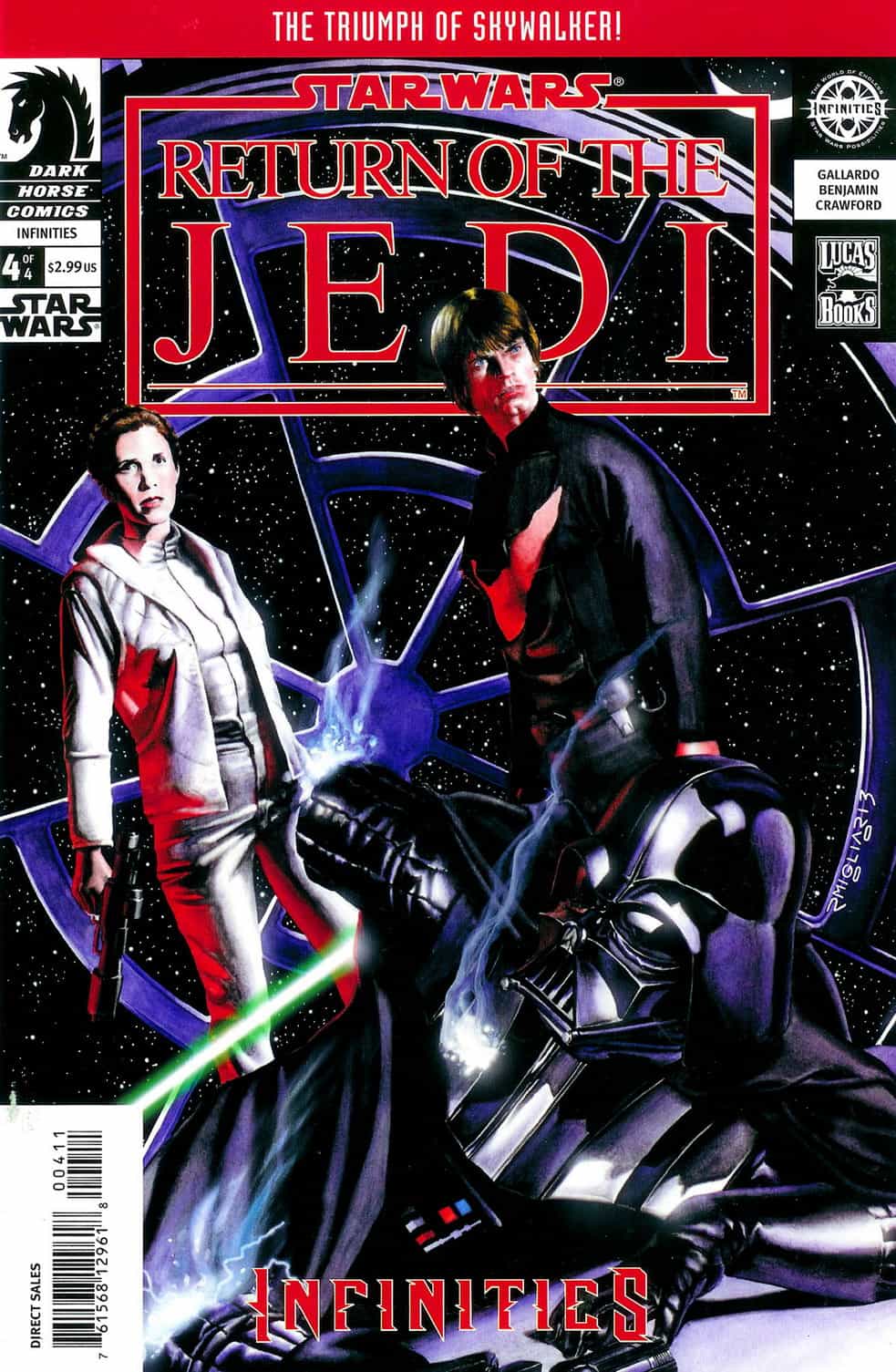 Dark Horse released an “Infinites” take on each of the three Original Trilogy stories, using a specific “what if?” point of deviation from the original films (like Leia training on Dagobah with Yoda instead of Luke) then following it to its conclusion. All three are worth reading for some fun alternate takes on familiar stories, but the Return of the Jedi one gets the nod just for the image of a redeemed Darth Vader wearing all-white armor. 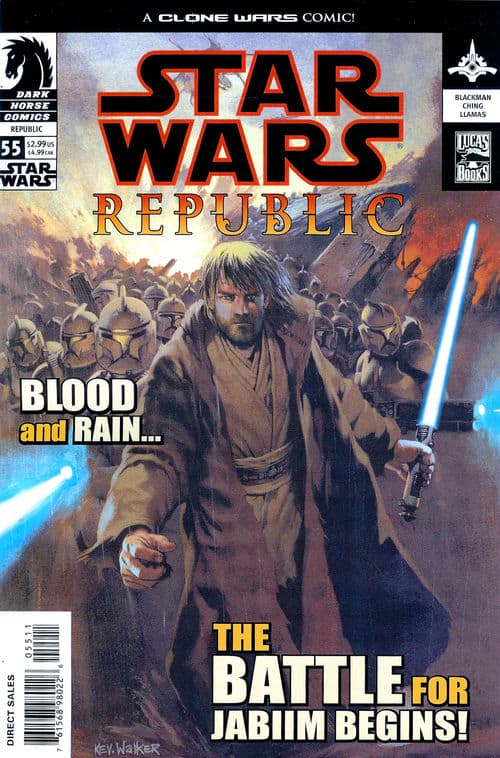 Launched in 1998, just prior to the release of The Phantom Menace, the simply-titled Star Wars was the first Dark Horse to carry that name. Following the release of Attack of the Clones, it was retitled Star Wars: Republic, and began chiefly chronicling battles of the Clone Wars, featuring both film-centric characters like Anakin Skywalker and Mace Windu, and Dark Horse originals, like Quinlan Vos. In the process, it effectively became a war comic, as focused on the harsh realities of battle and the perspective of troops on the ground as the flashy, big picture world of the Jedi. Issues #55-58, detailing the Battle of Jabiim, is a standout of that run of issues, featuring Republic forces, led in part by Anakin, becoming overwhelmed by Separatist forces on the muddy, rain-soaked mining world. With Obi-Wan believed dead, Anakin is forced into a group of similarly Master-less Padawans, and is forced to watch as they’re cut down one-by-one in a war of attrition, culminating in Anakin making a decision which echoes his later transformation into Darth Vader. It’s a worthy representation of the consistent level of quality Dark Horse was hitting with all it series during this time, it’s arguable heyday.

See also  Most Anticipated Comics of 2016: Dark Jem Arc of 'Jem and the Holograms'

(“In the Shadows of Their Fathers”, a story which ran in issues #29-30 and 32-34 of sister series Star Wars: Empire, is a follow-up to the “Battle of Jabiim”, set during the Rebellion Era and featuring Luke trying to help the planet free itself from Imperial control decades after the Clone Wars battle, while dealing with the fallout of his father’s earlier actions. It’s also worth seeking out, though it’s not yet available on Marvel Unlimited). 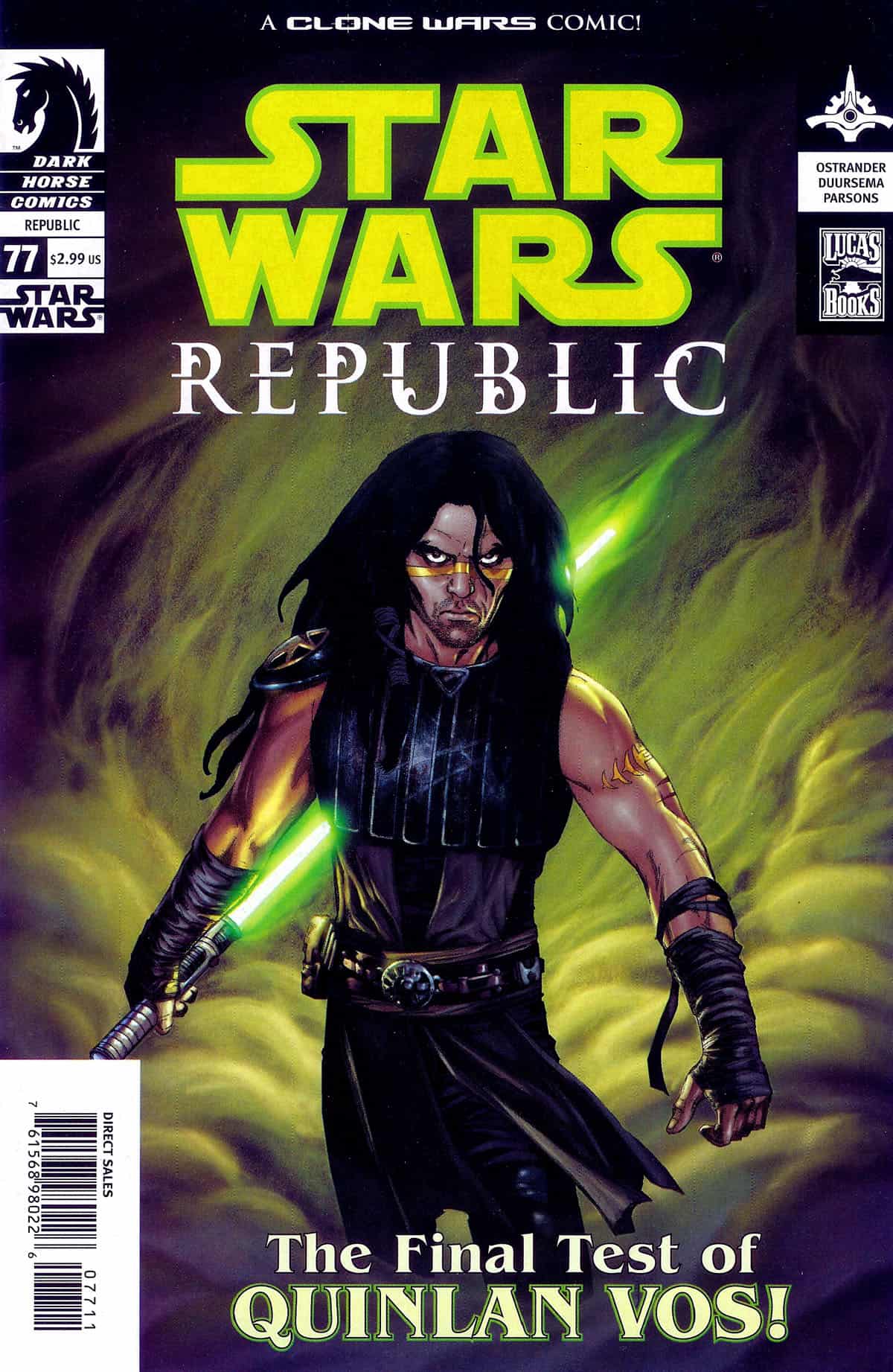 The final story arc before the release of Revenge of the Sith, “Siege” is both the culmination of Republic‘s coverage of the Clone Wars as well as the character arc of Quinlan Vos, the Han Solo-esque Jedi introduced in the pre-Republic days of the series. Having gone undercover amongst the Separatists in order to root out the mysterious second Sith the Jedi believe to be behind the war (in addition to Count Dooku), “Siege” features Vos’ final battle with the dark Jedi Sora Bulq (who he erroneously (as the readers know) believes to be that Sith) and the culmination of his own struggle with the Dark Side, as he was forced to walk closer than ever to that path in order to infiltrate the Separatists. Thus, the story serves as a fitting and satisfying conclusion to this era of Star Wars publishing on both a plot and character level.

The Return of Tag and Bink: Special Edition #1
by Kevin Rubio & Lucas Marangon 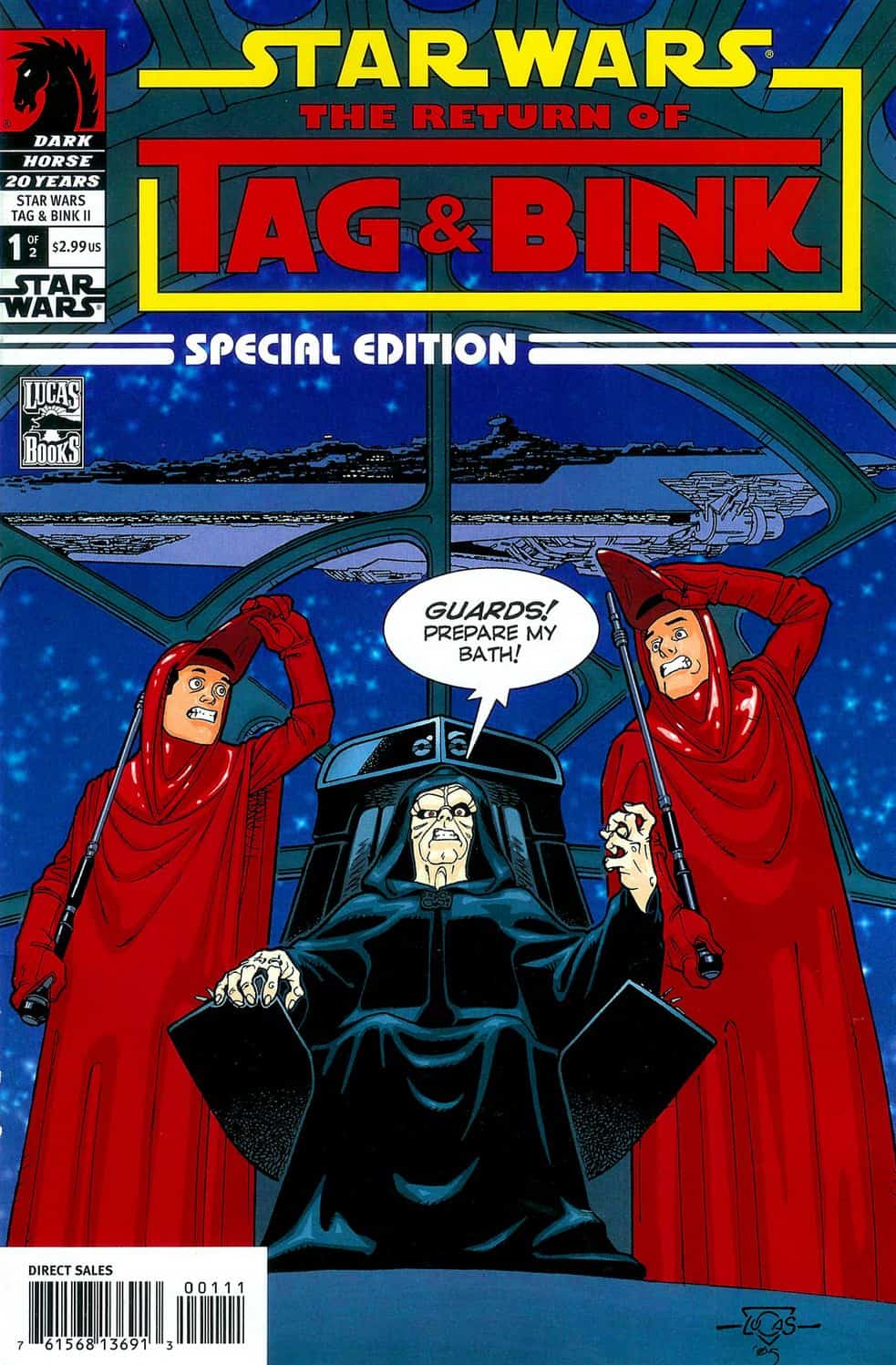 Tag and Bink, the Rosencrantz and Guilderstern of the Star Wars universe, starred in a handful of stories during Dark Horse’s tenure, finding themselves woven in and around familiar narratives in humorous, tongue-in-cheek stories. This issue, set during Return of the Jedi, is the best of the lot, thanks chiefly to a pun that will make you never watch Jedi the same way again. 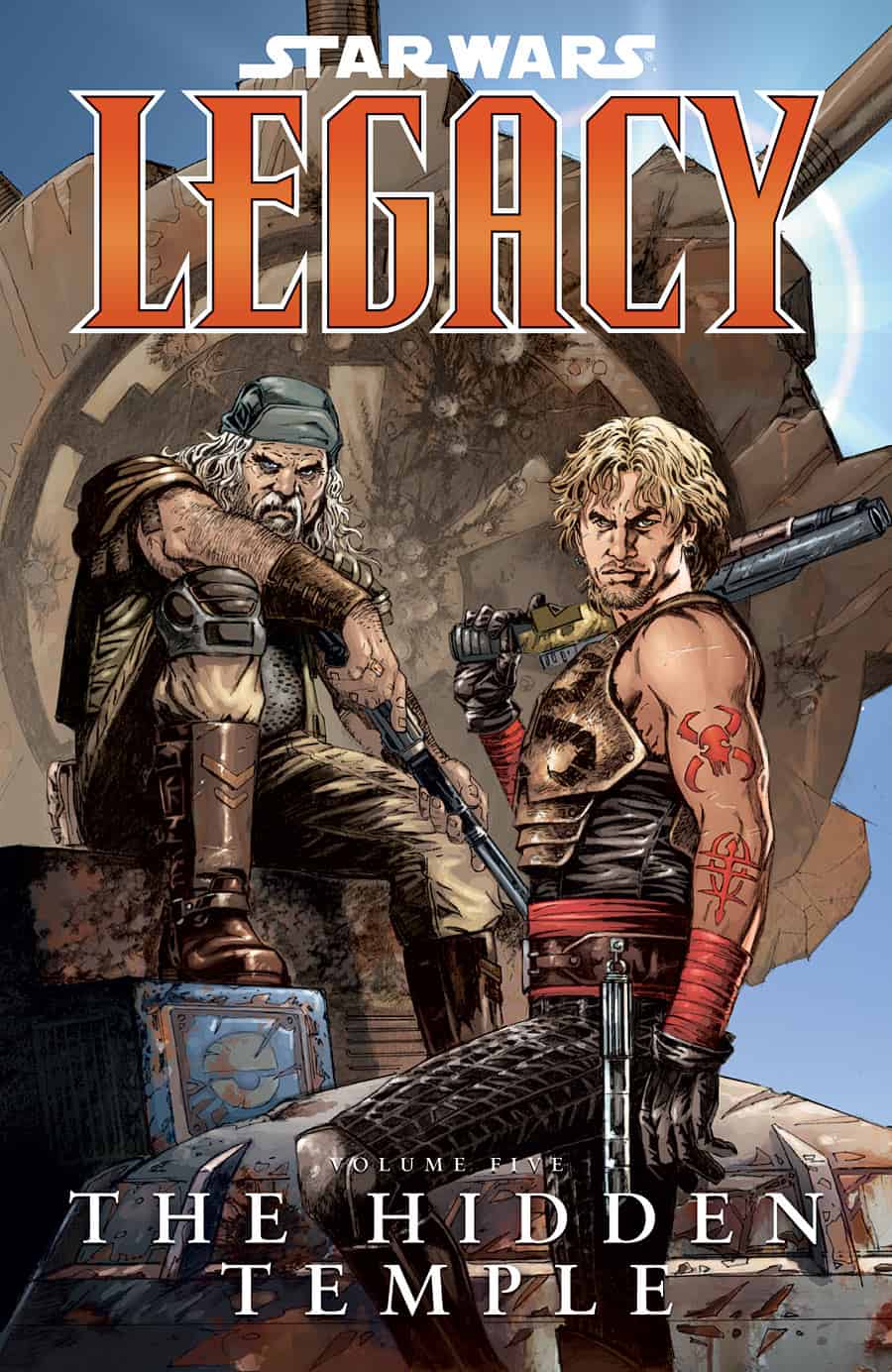 Of all the various creators who worked on Dark Horse’s sprawling Star Wars series through the decades it held the license, arguably none left a bigger mark that John Ostrander and his frequent collaborator Jan Duursema, and Legacy is their magnum opus. Set in what still remains the furthest point in the future of the Star Wars universe, it stars Cade Skywalker, a descendant of Luke who dials up the “Han” in the “Han as a Jedi” equation to eleven. As with any series this long (it ran 50+ issues, including a six part miniseries, Legacy War, that wrapped up the whole thing) there’s plenty of ups and downs during its run, but the whole thing is worth reading in order to get fully immersed in the galaxy Ostrander & Duursema have created, one which hits both familiar beats and also twists and turns those beats into something new, and to fully appreciate the character arcs completed in the run of the series. 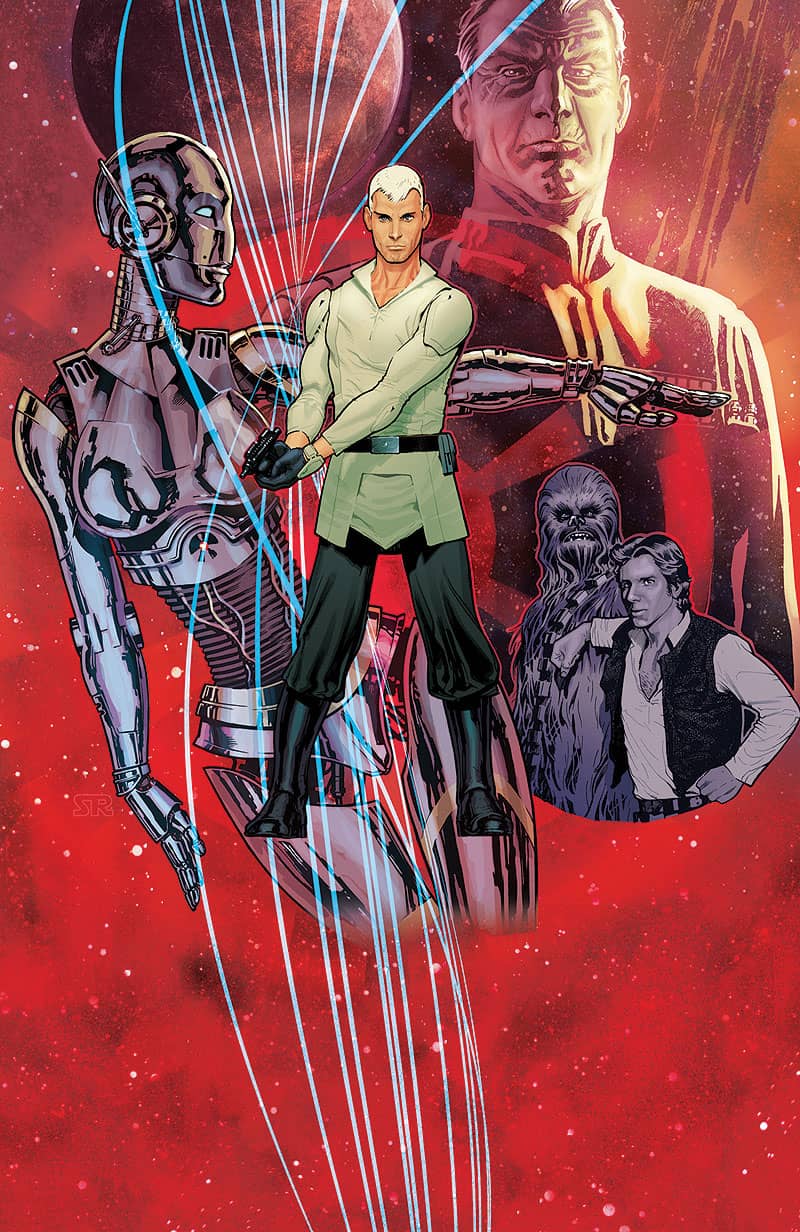 The first of two limited series starring Jahan Cross, this is basically “James Bond in space”, with Imperial spy Cross standing in for the iconic British character, and much of what makes the series great is in the details: Cross isn’t just “Imperial Bond”, the entire story is structured like a Bond story, complete with Cross making regular reports to an M-like authority figure, receiving gadgets from a weary Q-like ally, sleeping with femme fatales and being disavowed by his masters in the course of doing his job. The shoe-horning in of Han and Chewbacca is a bit forced, but otherwise, “Iron Eclipse” is a story that showcases the diversity of Star Wars, telling a tale that has nothing to do with Jedi, the Force, or the larger galactic conflict while positioning an ostensible villain as the protagonist. 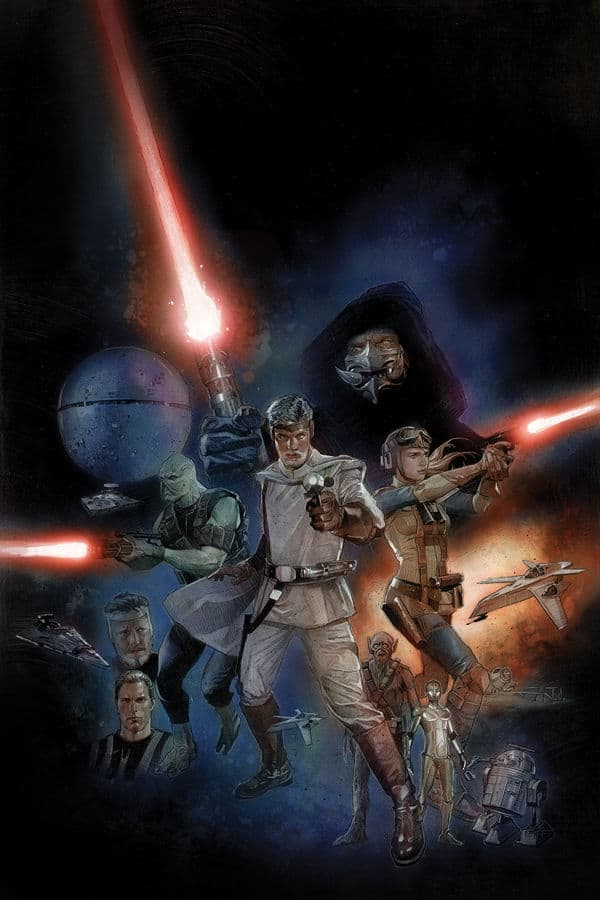 An entertaining exercise in adaptation, The Star Wars is an adaptation of George Lucas’ original draft of Star Wars, featuring an older Luke Skywalker and Annikin Starkiller, with art from Mike Mayhew that is deeply inspired by Ralph McQuarrie’s design work for the film. While an enjoyable story in its own right, most of the fun in this comes from seeing the raw form of well-known characters and ideas (like a large, reptilian, Chewbacca-esque Han Solo), as well as when planet names and story beats pop up which were unused in the finished film but appeared later in the franchise (like “Utapau” – later a planet in Revenge of the Sith, and “Clieg Whitesun” – later the first name of Anakin’s stepfather and the maiden name of Luke’s aunt). Of course, he whole thing is, ultimately, a giant, well-illustrated “What If?” story, but then again, so is everything on this list now.

Knights of the Old Republic & X-Wing: Rogue Squadron
These are two series with a decent number of issues under their belts which routinely get mentioned by fans in these kinds of lists, but I’ve not read enough of either to feel comfortable recommending them.

Star Wars: Dark Times
Set immediately after Revenge of the Sith and in the intervening years leading up to A New Hope, this is hands down one of the best of Dark Horse’s series. However, its inclusion in Marvel Unlimited is, at the time of this writing, spotty, at best.