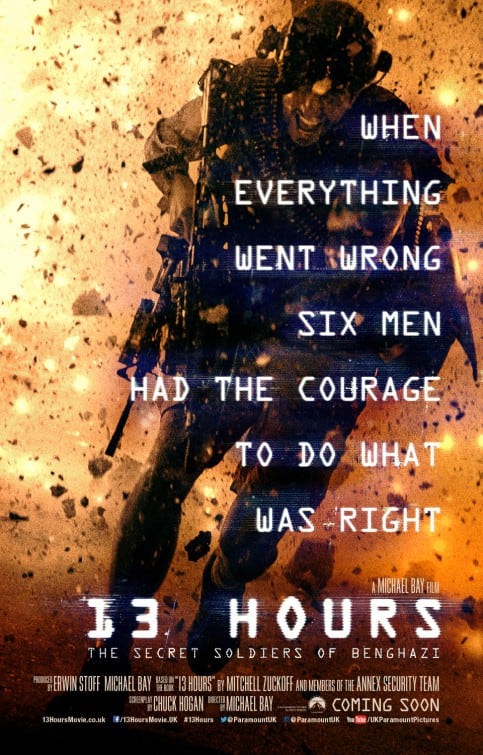 After the box-office success of Lone Survivor and American Sniper, the cottage industry of military themed January releases continues to go strong. Whereas those films came from Peter Berg and Clint Eastwood, directors known for taking a backseat to the material when it was called for, 2016’s entry, 13 Hours: The Secret Soldiers of Benghazi, comes from a director with the least tact ever observed over a career. Early speculation around the film had it that 13 Hours would be Michael Bay’s most grown-up film, but those rumors were incorrect.

As the screen opens with the text “This is a true story,” Michael Bay wants viewers to know right away that 13 Hours is the truest account of the biggest news story of 2012. Pointed blame isn’t passed around openly (Clinton and Obama aren’t mentioned), but Bay still wants audiences to know who he thinks is at the center of what went wrong. For the purposes of this film, the person to be blamed is C.I.A. station chief, Bob (David Costabile). Costabile really mugs it up as the distrustful supervisor, who makes it clear that any advice the security contractors have to offer will be met only with scorn. Inadequate safety measures at the diplomatic compound are questioned, but never addressed, and the difficulty in identifying which Libyans are friendlies or adversaries also doesn’t concern the higher-ups.

Just after landing in Benghazi, Jack Silva (John Krasinski) and Tyrone Woods (James Badge Dale) engage a hostile gang on an ordinarily unremarkable trip back to the C.I.A. annex. Guns are pointed, threats are exchanged, but no shots are fired. The scene is justifiably tense, yet it also serves as a taste of the chaos to come later during the U.S. Ambassador’s arrival. Ambassador Steven’s visit to Benghazi was an effort to win over the Libyan people, but a few hundred armed militants saw it as an opportunity to strike. When the gunfire finally erupts, Jack, Tyrone and the rest of the contractors are left to watch the events helplessly from the roof of their base.

When Michael Bay is clicking on all cylinders, he can usually be forgiven for his errors in judgment, but he delivers a misfire in regards to the final act. During the long wait for permission to rescue the diplomat, Bay was eager to display his righteous indignation at the lack of value of human life, and that is never more clear than in one particular cut. During the assault on the compound, when all hell is breaking loose, Tyrone desperately calls for air assistance. The madness in Libya is contrasted with the dead quiet of fighter jets sitting on a runway in Italy. The requested air support never makes it to Benghazi. Bay isn’t known for making statements in his films, so that cut is an excruciating indictment, but then curiously he undercuts his own message by turning an account of tragic loss into a slick actioner.

The film went to lengths to show that the contractors were a band of brothers with families at home that cared about their well-being. Later, in the middle of gunfire Jack is showed trying to call his wife (a clear tug to the heartstrings). Then, in a move that makes one question whether Bay even cares, he goes to a camera angle attached to an incoming projectile that kills one of the lead characters. A moment that should be treated with the gravity of a protagonist dying is replaced with “a cool shot.” Making matters worse, the shot that followed a bomb down from the sky was a misguided reference to his own work from Pearl Harbor. The director is also not above portraying Ambassador Stevens, who died in the attacks, as a naive figurehead.

If 13 Hours is redeemed at all after the antics of its director, it comes purely as a result of the charm of the cast, headlined by John Krasinski and James Badge Dale. Krasinski proves that he is more than the affable guy everyone loved on The Office, and Dale continues to steal the show as a character actor is wont to due. It’s a mystery why Dale isn’t a star. He takes a total clunker of a line like “Payback’s a bitch, and her stripper name is karma” and pulls it off. Yes, that’s a real line of dialogue from the film. So when I say that 13 Hours is Michael Bay at his Bay-est, you’ll know it’s no lie. And that it’s not a compliment.