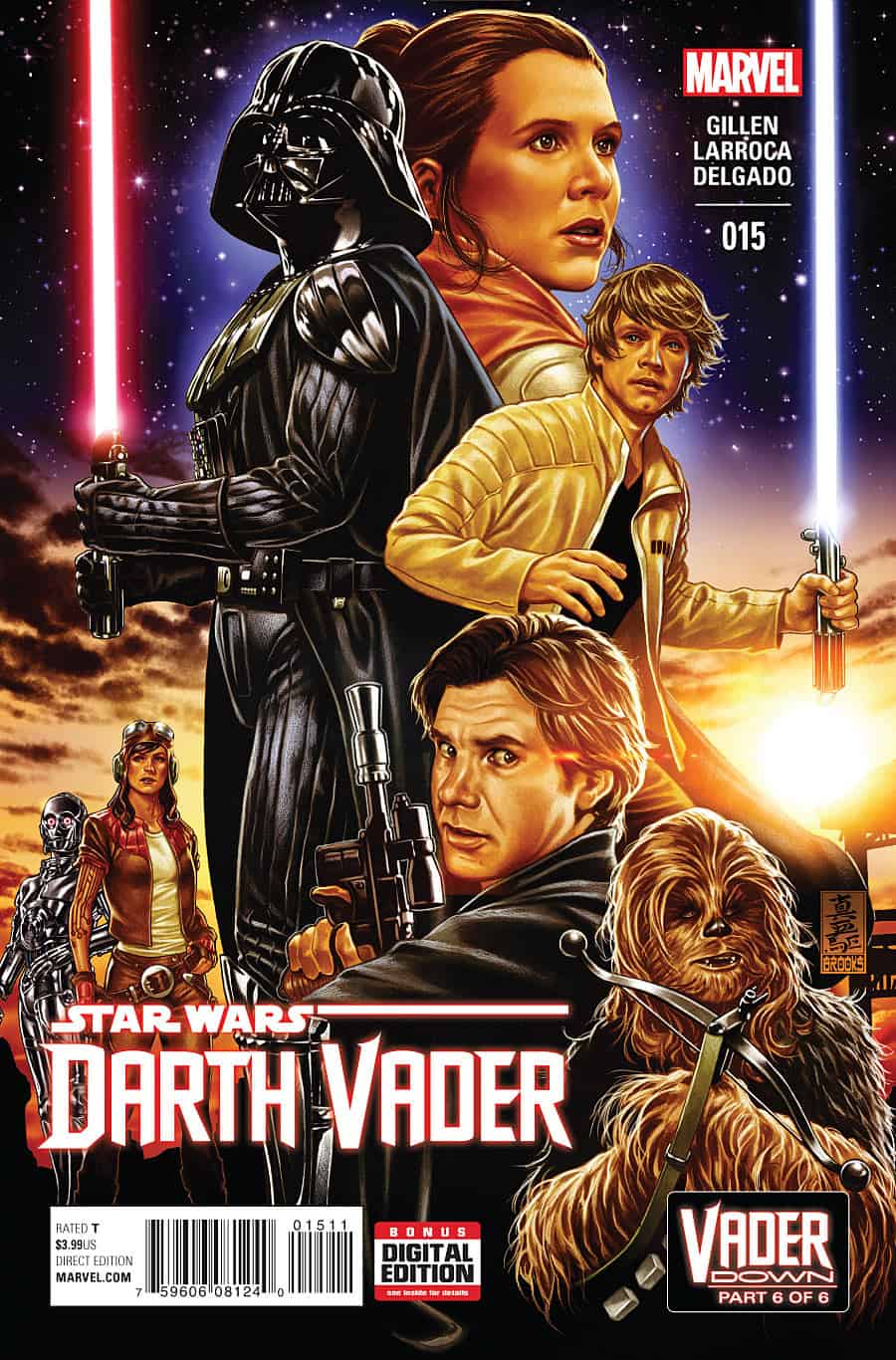 With this issue, the “Vader Down” crossover concludes mostly the same as it began and then unfolded: with a series of fun moments in service of an incremental, mostly-incidental plot. Picking up where the previous chapter in Star Wars #14 left off, each of the specific cliffhangers gets resolved in due fashion, before the storyline as a whole is brought to a close, ending in probably the most expected (and ho-hum) way possible.

As has been the case throughout this story, writer Kieron Gillen and artist Salvador Larroca pack this issue with several fun, fist-pumping moments, from Dr. Aphra getting back in Vader’s good graces in the most over-the-top way possible (in what amounts to a great personal sacrifice for her and a big visual moment for Larroca), to an armless Threepio saving Chewbacca, to Vader “rescuing” Luke from Commander Karbin’s forces via the sheer power of the Force. These were all eminently enjoyable, well-written and well-illustrated moments (and, given that the events of this issue have the biggest impact on the regular characters of Darth Vader, it’s appropriate that this series got to close out the larger storyline).

But as has been the case for most of this crossover, that’s all this issue truly is, a collection a fun moments in the service of a bare bones plot: Darth Vader crash lands on a planet with a Rebel base on it, and he and his allies proceed to engage in a series of skirmishes with Luke, Han, Leia, etc. There’s lots of ne 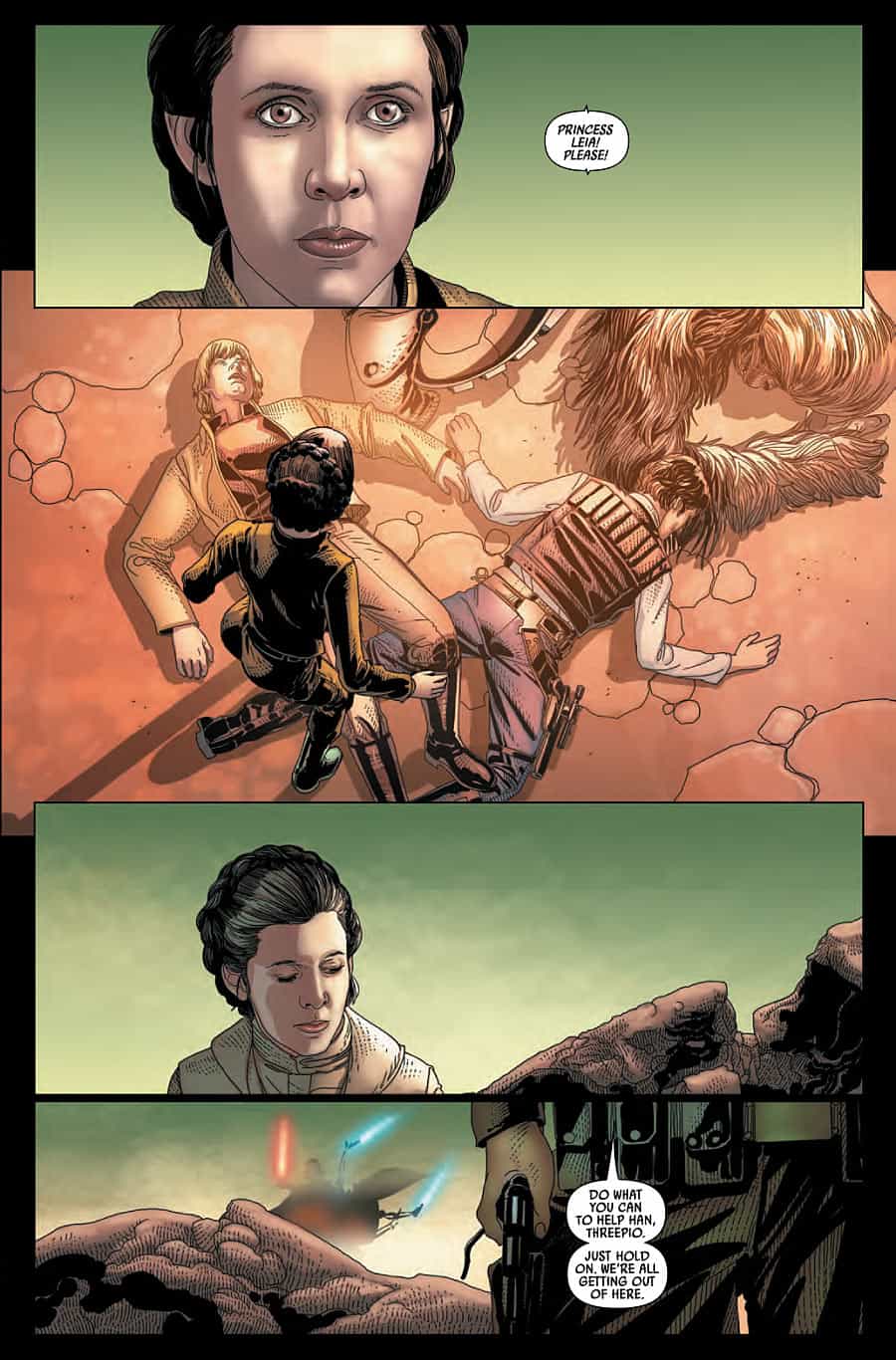 ar hits and near misses on both sides (With the sudden arrival of Commander Karbin giving the plot a much needed jolt towards the end.), and then it’s over with neither side achieving any of their goals, save “surviving to the end.” Hampered by being chiefly about Vader’s desire to capture Luke and its pre-The Empire Strikes Back setting (thus making Vader doomed to fail), the closest thing there is to any kind of narrative momentum or character arc here is Leia’s realization that there are more important things than killing Darth Vader. While that’s a nice realization to see unfold (and Gillen here and Jason Aaron in Star Wars execute it well, never making it a big deal but still making their point), it’s hardly enough on which to hang an entire crossover (especially one where Leia isn’t the central character).

Ultimately, there just isn’t enough plot to “Vader Down” to sustain six issues, as a relatively straightforward narrative hook and its subsequent ramifications get stretched thin filling all that space. The whole thing is gorgeously illustrated (if a little stiff, action-wise, at times), and will read much better in trade, but as a sequential story released over three months, it comes up short. Which is a shame, because a crossover between two canonical Star Wars comics has never really happened before, and given the impact of Vader’s realization that Luke is his son, on both a plot and character level, this had the potential to be a huge, game-changing storyline for both titles.

Instead, while individual moments from the story, like Vader single-handedly dispatching wave after wave of Rebel troops, or Triple Zero cosplaying as Threepio, or Chewbacca living up to his hype by ripping off Triple Zero’s arms, or even Leia quietly accepting that her friends mean more to her than killing Vader, will long be remembered, “Vader Down” as a whole seems more likely to fade away.