Considering the similar historical trajectory to the United States I’ve always wondered why Australian film-makers didn’t produce more Westerns. The obvious answer of course is that as a genre the Western is not in vogue as it once was but the miniscule volume of braves that have stampeded down under over the years contain a modest list of intriguing, intelligent and gripping films – from the brutal The Proposition (2005) to the angry The Chant Of Jimmy Blacksmith (1978) or the cultish Mad Dog Morgan (1976) you’d think that some enterprising antipodean producers would be anxious to exploit their countries history for the chtonic dollar. Similarly potent themes are ripe for exploration whether they are framed by Monument Valley or Ayers Rock, from the settlers uncertain relationship with the indigenous people, the birth of a new civilisation amidst a savage and inhospitable wilderness, how the human animal conducts itself in a lawless and morally void environment, or just an excuse to photograph some gorgeous sunsets whilst grappling with notions of revenge and duty, progress and power. Many of these lodestones are touched upon in the new neo-western Red Hill, whilst it’s not quite the equal of it’s kin it is serviceable enough thriller that marks the arrival of a new stranger in town, in the guise of debut director Patrick Hughes.

Marshall Shane Cooper (Tru Blood’s Ryan Kwanten) arrives for his first day on the job in his new posting at the remote (almost frontier) town of Red Hill. Shane has requested the re-assignment

from the big bad city following doctor’s orders concerning his wife, at the eighth month of her pregnancy she has been instructed to move to a locale with a less stressed, more relaxed climate after she miscarried a year ago during the same trimester. In a classic case of bad timing Shane’s arrival coincides with the jailbreak of the feared Jimmy Conway, a native Australian whom was captured and incarcerated by Shane’s boss Bill fifteen years ago, and everyone knows that Jimmy will be returning to town to seek his revenge. As the storm clouds gather at the edge of town Shane is dispatched with all able bodied men to hunt down his primeval nemesis but the lawman’s curious reluctance to seek succor from the neighbouring townships may just cloak an ulterior motive and obscured history….. For the most part Red Hill hits the genre buttons like a 300 pound Longhorn but there was something faintly unsatisfying about the film. Kwanten’s persona is quite different from his smaller screen incarnation – he’s much more reserved and scared in his first big screen cantor – and he has able support from the veteran character actor Steve Bisley as the churlish Old Bill and a murderously mute Tommy Lewis as the revenge obsessed Jimmy. The mood builds steadily to a revelatory crescendo and although the narrative trails are perfectly serviceable the Western motifs and iconography feel a little forced at times with the protagonists favouring four-legged modes of transport over the surely more efficient four-wheeled kind? These genre nodes are lasooed with a seasoned efficacy – the monosyllabic, almost supernaturally adept villain, the paralysingly tense shoot-outs, the acoustic slide guitar soundtrack – but the final act feels a little disjointed and uncertain after such a proficient set-up during the preceding 40 or so minutes. Still, for a fleeting thriller with reasonably fresh confluence of genres old and new then Red Hill can’t be faulted too harshly for a first effort, as a calling card its a commendable effort that marks Hughes as one to watch. 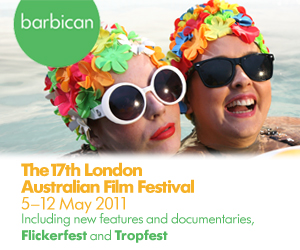