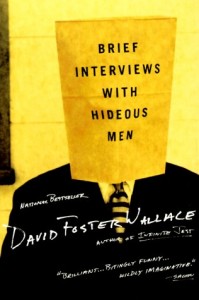 Dir. John Krasinski
John Krasinski deserves some enormous kudos for bringing such a faithful, intelligently constructed and nontraditional adaptation of David Foster Wallace’s writing to the screen–even a flawed one such as Brief Interviews with Hideous Men.  Wallace’s work defies filmic adaptation, and it takes incredible heart and chutzpah to even try, much less kind of succeed.  If Krasinski’s intended purpose in making this film was to give Wallace a fitting big screen tribute, then he didn’t quite pull it off, but if his intent was to extol the unsung virtues of John Krasinski, then Interviews is a smashing success.

The film centers around grad student Sara Quinn (Julianne Nicholson), who is, for reasons that may be revealed later on, interviewing a handful of men on the subject of women.  Though frequently off-screen, her presence is nonetheless felt in every scene.  John Krasinski plays Ryan, Sara’s past, present, or future boyfriend, depending on what scene you’re watching.  Timothy Hutton is Sara’s professor and interview subject #30.  And the rest of the cast fills out with plenty of minor, largely unnamed, roles who officially or unofficially wind up as Sara’s interviewees.

The action of the Interviews is unsurprisingly based in the interviews themselves, as men ruminate on beliefs, insecurities, transgressions, and fixations.  The plot is slight and nonlinear–so to say anything would likely reveal too much–but the film’s structure is fascinating and signifies Krasinski’s most obvious directorial flourish.  Chronology, visuals, and audio weave around each other in surprising, sometimes transcendent, ways.  Krasinski’s best trick involves scattering pieces of interviews throughout the film, juxtaposing scenes by content, irregardless of timeline.  Naturally, the film climaxes in a long, well executed monologue from Krasinski himself, but the film prior unfortunately doesn’t cohere well enough to give satisfactory weight to his performance.
The cast is fine, in that everyone present knows how to deliver a killer monologue, but the uniformly intellectual nature of Interviews doesn’t allow much room for character depth.  All of the characters are a collection of beliefs and actions, with meager emotional undercurrents. A little coldness isn’t inherently bad, but by the second or third steamrolling of the fourth wall, our titular men begin to feel like little more than Wallace mouthpieces.  There are several astounding monologues, but a movie like this–where people must actually speak Wallace’s writing–demands universally excellent performances, and it unfortunately comes up short with many very good performances.  The result is a film that merely adds up to the sum of its impressive parts.
That said, it is also hard to imagine somebody doing a better job.  Wallace is a difficult writer to adapt, and it’s apparent that Krasinski took cues from the Interviews stage show for his attempt.  The film is full of little theatrical flourishes, such as audience asides or the frequent dropping of one side of a dialogue.  In fact, beyond the unusual structure and some modest sets, there isn’t much to distinguish the film from a stage show.  As such, Interviews is a singular and willfully strange film which occupies a little explored netherworld between the stage, the page, and the set.
The most unfortunate conclusion to be drawn from Interviews, which is sadly unflattering of a mostly good film, is that it doesn’t fully justify its existence.  It is unmistakably a David Foster Wallace adaptation–achieving much of his insightfulness and humor–but without the joy of reading Wallace or the immediacy of a live stage performance.  There’s been an increased interest in Wallace’s work since his untimely passing, and while this isn’t the most wonderful way to start falling in love with him, it’s a good 80 minute introduction.
– Emmet Duff
Scroll to Top