There have been a lot of very dope action scenes this year – the church scene in Kingsman: The Secret Service, the fight between The Rock and Jason Statham in Furious 7, and basically everything in Mad Max: Fury Road, to name just a few. Basically, we’ve gotten some incredible action sequences this year. This is not about the sequences themselves though, but the stars who kick ass in them. Only one person can claim the title of 2015’s top action hero. Action Heroes are like Highlanders; there can only be one.

Some rules. Mostly the same as last year. We’re definitely going to break some of them.

Rule #1: We’re definitely going to bend this rule, but all candidates must be lead performers.

Rule #2: There is no limit to how many action heroes can make the rankings, but we’ll keep it small in the spirit of competition.

Rule #3: There isn’t a clear science to quantifying ass-kicking, but I did take into account the box office revenue, iconography and the general amount of ass kicked by each action hero.

So after going over the analysis, adding my own confirmation bias and doing a lot of sweating, here are the rankings. 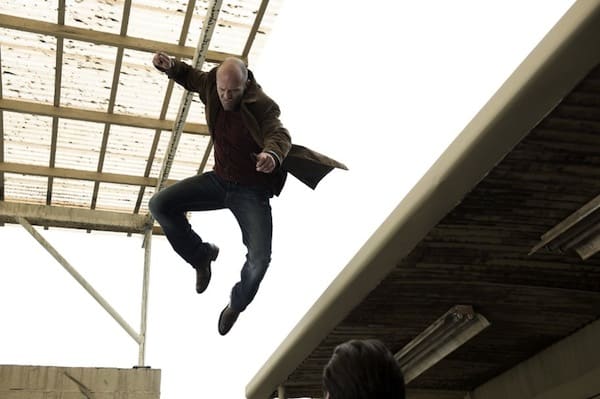 Listen, Jason Statham playing the villain in Furious 7 made me as giddy as I’ve ever been, but there is one moment in Wild Card that trumps it all. Wild Card is kind of amazing and underrated because it feels like Statham and director Simon West watched Drive and said “Let’s do that”, but it’s turned up to 11 and completely absent of the patience and cool of Drive because it’s Statham and the dude who directed Con Air. If that description does nothing for you, then I don’t know what to tell you.

Iconic Moment: There’s a part in Wild Card where Jason Statham takes down a guy by slicing his forehead open in one swift move with a credit card. A CREDIT CARD. Anything and everything is a weapon in Statham’s hands.

Even a year ago, if you told me that Colin Firth would have one of the most bad-ass action sequences of the year, I would have smacked you. That was before I saw Kingsman. Now, anything is possible, because we live in a world where Colin Firth kicks ass. Hopefully, this is a world that will continue, and Colin Firth will have a late career renaissance as an action hero.

Iconic Moment: The church fight scene because duh. Done in prolonged takes, the scene is absolute cinematic anarchy, as Firth fights and brutally kills his way through an entire church full of people bent on killing each other.

Every genre icon deserves to have their own Unforgiven, where they reflect on the genre that made them famous and examine the negative effects of it on themselves. Run All Night is probably the closest thing we’re ever going to get to a Liam Neeson Unforgiven for his run as Hollywood’s most bankable action star, as his character is forced to confront how much a life of violence has cut him off from any sort of life at all.

Iconic Moment: In the climax, Neeson has one shot to save his son from getting killed. In one swift move, in slow motion too, Neeson raises and cocks a rifle one-handed and fires off a perfect shot. God has truly blessed us with Neeson as an action hero. 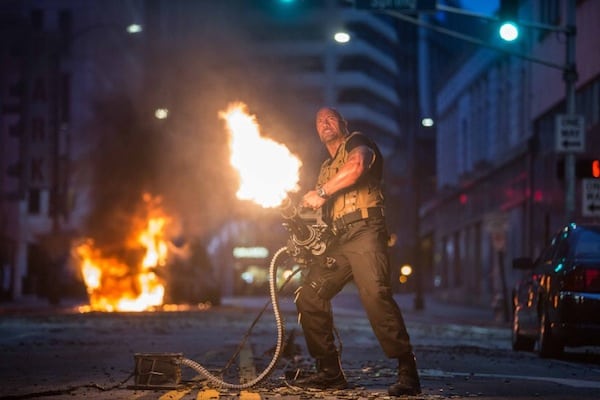 We’re bending the first rule here as The Rock is only in Furious 7 for like 10 minutes, but they are among the greatest 10 minutes ever filmed. Furious 7 proves the all-around watchability and charisma of The Rock, because he leaves the biggest impression with the least amount of screen time. There have been rumors of a spinoff film for his character Hobbs, and honestly 2 hours of The Rock as this character would probably be the greatest action film ever made.

Iconic Moment: While the fight scene between him and Statham was everything I’ve ever wanted in life, the iconic moment has to be everything he does during the climax. First of all, he busts out of an arm cast through sheer will and muscle power, seemingly curing his arm in the process. Then he takes down a drone by crashing an ambulance into it. He steps away from the wreckage, and Letty asks him “Did you bring the cavalry?” His response is “Woman….I am the cavalry.” Boom. Paycheck. Then he fires a big-ass machine gun and it’s the greatest moment of my whole entire film-viewing life.

Tom Cruise is 53 years old and is hanging off planes and holding his breath underwater for obscene lengths of time. Meanwhile, I am 23 and I think I pulled a back muscle when I rolled out of bed late this afternoon. Basically, Tom Cruise is a real life superhero. Nobody works as hard as Tom Cruise to wow you, and the stunts he did in Rogue Nation were a testament to his work ethic and his infinite draw as an action hero.

Iconic Moment: It’s hard to pick just one, as Rogue Nation had him doing some of the most insane stuntwork in his career, but the sight of him hanging off the airplane takes the cake because that is actually Tom Cruise hanging off the side of a plane. One of my favorite things to do this year was show people that scene from the trailer and watch their faces when I told them there was no green screen in that footage. I love you, Tom Cruise. 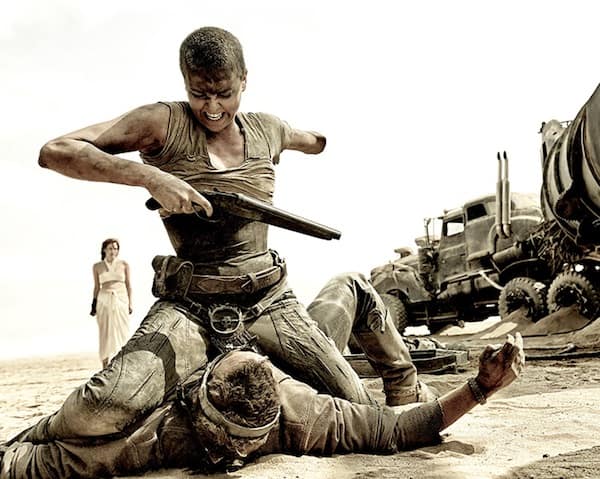 Mad Max may have been the title character, but this film was Furiosa’s. Charlize Theron not only delivered one of the best all-around performances of the year, but one of the most iconic performances as an action hero this decade. It takes a true hero to upstage Max in his own film, and Theron delivered a hero for the cinematic ages in Furiosa.

Iconic Moment: Max grabs the sniper rifle to try to take out the approaching Bullet Farmer. There are 3 shots. He misses the first two. Furiosa approaches, he hands the rifle off to her. Then, she uses his shoulder to steady the rifle, and takes a perfect shot, which is just about the most bad-ass thing to happen at the movies this year.