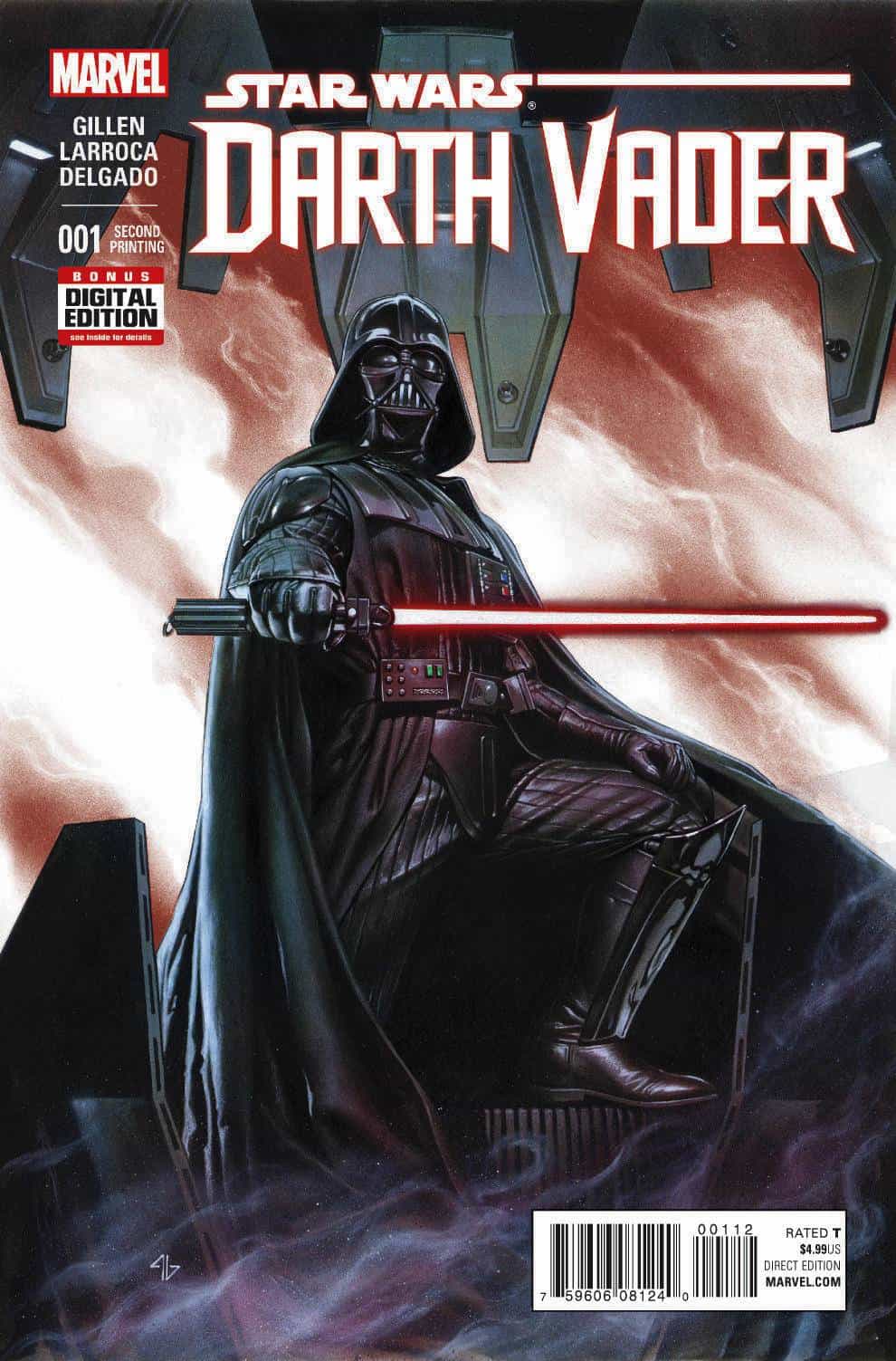 Marvel’s Star Wars comic, featuring the continuing adventures of Luke, Han, Leia, etc. in the time following A New Hope and before The Empire Strikes Back, is clearly positioned as the flagship series of the company’s line of Star Wars ongoing, limited, and one shot series. Yet for all the top-notch artists that have worked on the series and exciting moments that have unfolded in its pages, it has consistently played second fiddle in terms of pure quality to its sister series, Darth Vader. Comic books starring super-villains are routinely difficult to pull off, but in the fourteen issues released in 2015, Darth Vader has stood head and shoulders above the rest of the line. Here, then, are five reasons it is the best of Marvel’s Star Wars books.

Darth Vader is the Hero
Not to be confused with “Darth Vader is a hero”, because he’s not. By no means are Vader’s actions altruistic in this series: he’s a villain, through-and-throug  as evil and selfish and violent as he was portrayed in the films. But everyone is the hero of their own story, and writer Kieron Gillen wisely positions Darth Vader as, if not a hero, then at least the protagonist of his own story, giving him specific desires and goals beyond “being evil!”, surrounding him with a supporting cast  of like-minded allies (Just like the hero of a traditional super-hero comic would have.), and arraying him against a series of one-off and recurring antagonists who challenge him on both a physical and mental level. In short, even though this series stars one of cinema’s greatest villains, Gillen structures the series no differently than he would a book starring Batman or Captain America. Vader is not heroic, but the series around him treats him like he is. 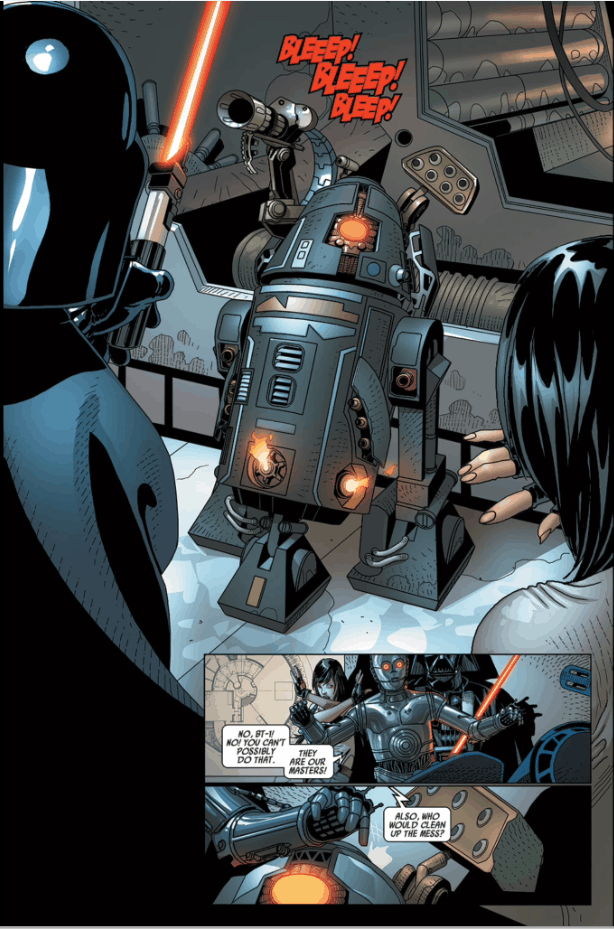 he Supporting Cast
Of all the various elements at work in the series, none deserve recognition more than its supporting cast. In archaeologist Dr. Aphra, torture-prone protocol droid Triple Zero and homicidal assassin droid Bee Tee, Gillen and series artist Salvador Larroca have created a Han, Threepio and Artoo of Vader’s very own, a group of characters that work as a dark reflection of Luke’s friends in the same way Vader is a dark reflection of Luke. From Aphra’s knowing self-awareness (she genuinely enjoys working for Vader even though she realizes it’s more than likely that their association will end by her death at his hands) to Triple Zero’s gleeful desire to inflict pain wherever he can to Bee Tee’s simple, chaotic madness, all three do a superb job of adding to and deepening Vader’s character while preventing him from spending most of his series alone in stoic silence.

Consistent Art
While Salvador Larroca’s art can, at times, be stiff and somewhat cold, lacking the fluid lines of John Cassaday or the bombastic energy of Stuart Immonen (two of his contemporaries on Star Wars), he nevertheless draws an effective Vader, depicting emotion from a main character whose face is masked at all times simply by the tilt of his head, the clench of a fist, or a lack of movement entirely. More importantly, Larroca has drawn every issue of the series thus far, giving it a consistent artistic identity and visual vocabulary unmatched by any of Marvel’s other Star Wars series.

Writing for the Issue
Similar in a way to the artistic consistency, Gillen has done a masterful job of making each issue of this series a satisfying story in its own right, even while the series thus far can be loosely grouped into two, ready-for-the-trade storylines (plus the in-progress “Vader Down” crossover with Star Wars). The first six issues are roughly concerned with Vader’s quest to discover the identity of the pilot who destroyed the Death Star while also uncovering the details of the Emperor’s ongoing mission to find additional (and possible replacement) apprentices, while the second six deal with Vader’s efforts to confirm Luke’s existence and locate him (which lead directly into “Vader Down”) as well as furthering his own agenda against the Emperor while dealing with Imperial oversight. But within those larger arcs and simmering subplots connecting each issue, each issue also stands on its own, portraying a specific step (or setback) in Vader’s overall schemes: recruiting Aphra in one issue, covering up the robbery of a ship carrying millions of Imperial credits that he orchestrated in another. Each small plot feeds into the larger plot and Vader’s overall goals, but also results in a satisfying read, issue by issue. 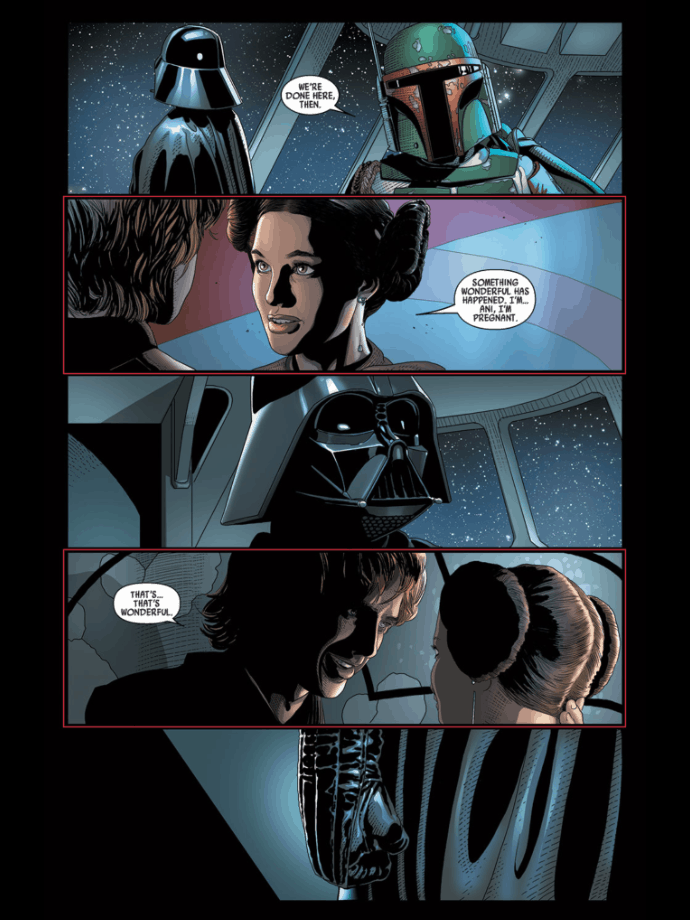 Embracing the Past
Without a doubt, the standout moment of Darth Vader (and arguably all of the Star Wars titles) is Vader’s reaction to the news that the Rebel pilot who destroyed the Death Star is Luke Skywalker, and thus, the son he thought died with his wife. While both Star Wars and Darth Vader depicted this moment in parallel, in Star Wars, where Vader is structurally an antagonist, the reaction is much more reserved. In Vader, his anger, sorrow and frustration are more palpable, as Gillen and Larroca recall the events of Revenge of the Sith to further punctuate just what this reveal means for the man once known as Anakin Skywalker. It’s the most significant of several ways the series embraces the history not just of A New Hope, but of the entire Star Wars saga, including the much-maligned Prequels. Whether it’s Vader’s acquisition of an army of old Separatist-vintage battle droids or Aphra’s mission to interrogate the mortician who handled Padme’s body after her death, Darth Vader doesn’t shy away from referencing events from the Prequel Trilogy. Instead, it uses those events to inform and deepen the characterization of its protagonist, reminding readers of what Vader once was, juxtaposing all his current power with everything that he once had, and lost, and showing what the sudden knowledge of his son’s existence means to him.

Thus, in embracing the full breadth of Star Wars history, along with its strong supporting cast, consistent art, and ability to both make each issue a satisfying experience and treat its main character like a protagonist and not just a villain, Darth Vader becomes not only a better series, but also the routinely best Star Wars comic on the shelves in 2015.