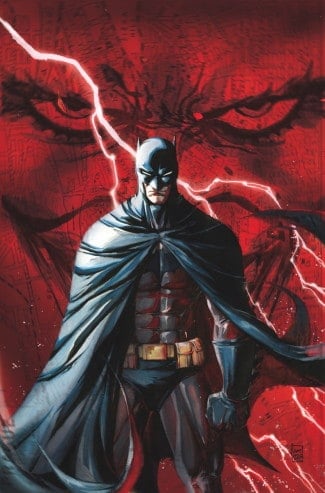 Batman and the Joker are joining forces and bouncing around Europe to find Trojan Horse, the person responsible for infecting them with the deadly Colossus virus. In the first issue, Batman contracts the virus, and finds that someone has infiltrated the files of the Bat-computer. Batman tracks the signal of the hack to Berlin, where he stops the Joker from torturing Nina, the hacker that was able to crack the Batcave’s computer.

Issue 2 picks up in action with a struggle between the Dark Knight and a large robot engulfed in flames. The struggle is on a bridge in Prague. The robot has taken out the Joker, and has now set sights on ending Batman. Before the action can reach climax, the story goes back two hours.

Batman has planned a sting operation with Nina and the Joker to catch Trojan Horse. Batman and the Joker are in the sewers of Prague, under Jan Palach Square.  Nina is in the square, waiting on Trojan Horse to make an appearance when a pack of wooden robots attack. Batman leaps into action and the book takes a turn. The story is self-contained, and concludes with a little teamwork from the unlikely duo. There is some fantastic work in the panels near the end, along with a few funny moments that any Batman fan can appreciate.

The art of Batman Europa is visually stunning.  The artwork of Giuseppe Camuncoli takes center stage for the majority of the book. Camuncoli has a bold, artistic style that really carries the story. The story leaves a little something to be desired. Matteo Casali and Brian Azzarello take a simple premise and take it global with major cities in Europe. While the first 2 issues make the arc a slow burn, the art alone makes the book worthy of picking up.