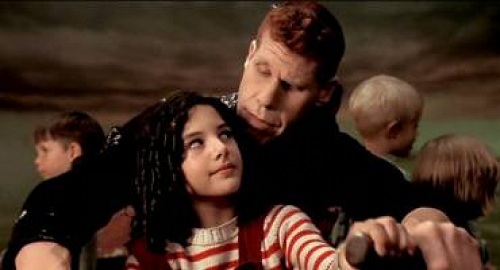 A little girl, Miette, and a carnival strong man, One, team up to look for One’s brother, Denree, who’s been kidnapped by a mad scientist attempting to steal children’s dreams. 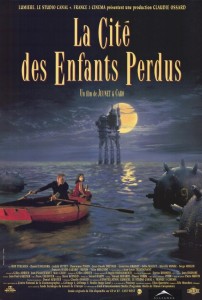 This strange, surreal film is unlike anything many will have seen. Certain comparisons to Jeunet’s Amelie are apt, but for the most part, La Cité des Enfants Perdus is a film all its own. It opens disconcertingly, with a young child visited by Santa. Then another comes down the chimney, followed by another and another. The room begins to spin, the numerous Santas grow increasingly distorted and threatening, and the music becomes increasingly ominous before cutting out to the boy and a strange man strapped in to a machine, large helmets attached to their heads. A scientist is attempting unsuccessfully to steal the boy’s dream, which has turned into a nightmare. This scene perfectly sets up the tone and setting of the film and lets the audience know just what they’re in for. 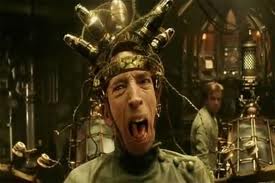 Not long after, we’re introduced to our leads, One and Miette, a carnival strongman whose brother has been kidnapped by the strange Cyclopses and the young leader of a gang of thieves, forced into crime by the evil conjoined-twin sisters who run her orphanage. Then there’s the opium-addicted flea wrangler, the narcoleptic clones, and the brain in the aquarium. It’s a colorful cast of characters, to say the least, but their strangeness doesn’t overtake the film. At the center of everything is the relationship between One (Ron Perlman) and Miette (Judith Vittet) which gives the film its heart and strong message of family and friendship overcoming all obstacles. 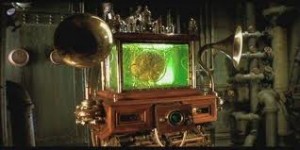 It’s a visually arresting film, with creativity and whimsy dripping from every frame. The design of the world is dark but not oppressing, a tricky line they walk successfully throughout the film. Though many may appreciate the visual elements, the strength of the film is its characters. The story doesn’t have the urgency one might expect, with One and Miette getting into a series of scrapes before they manage to even find where Denree is being held, but this time allows them to build their relationship and grow to trust one another. Time is also spent with the antagonists, who all feel fully fleshed out. Particularly memorable are Daniel Emilfork as the scientist, Krank, Dominique Pinon as the clones, and Geneviève Brunet and Odile Mallet as the twins. 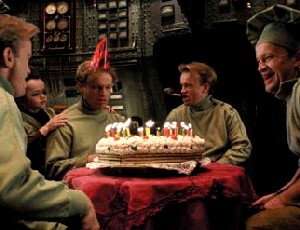 Ron Perlman has been a genre star for years. Known his lead roles in Beauty and the Beast (TV series) and Hellboy, it’s fun to see him in this early role sans the layers of prosthetics he’s most known for acting through (at least to those unfamiliar with FX’s Sons of Anarchy). He’s given plenty to do here and while One, along with most of the other characters, is extreme in his emotions, Perlman’s performance grounds these scenes. The real star of the film, however, is Judith Vittet as Miette, whose strength and spunk is well balanced by her occasional vulnerability. The two have excellent chemistry and even manage to make a troubling betrayal scene work incredibly well before quickly and believably rebounding back to their earlier strong rapport. This relationship alone amkes La Cité des Enfants Perdus a worthwhile view- the rest is icing on the strange, surreal cake.

Several different Santas make appearances, and memorable ones at that, and the theme of family is incredibly strong. On the scale of Christmas movies (1=Brazil, 5=A Christmas Story), this gets a 4.

You like fantasy or nightmare-scape films, Ron Perlman, or general bizarreness.