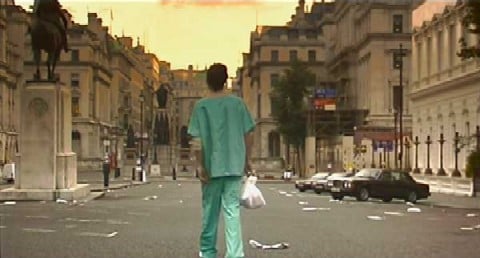 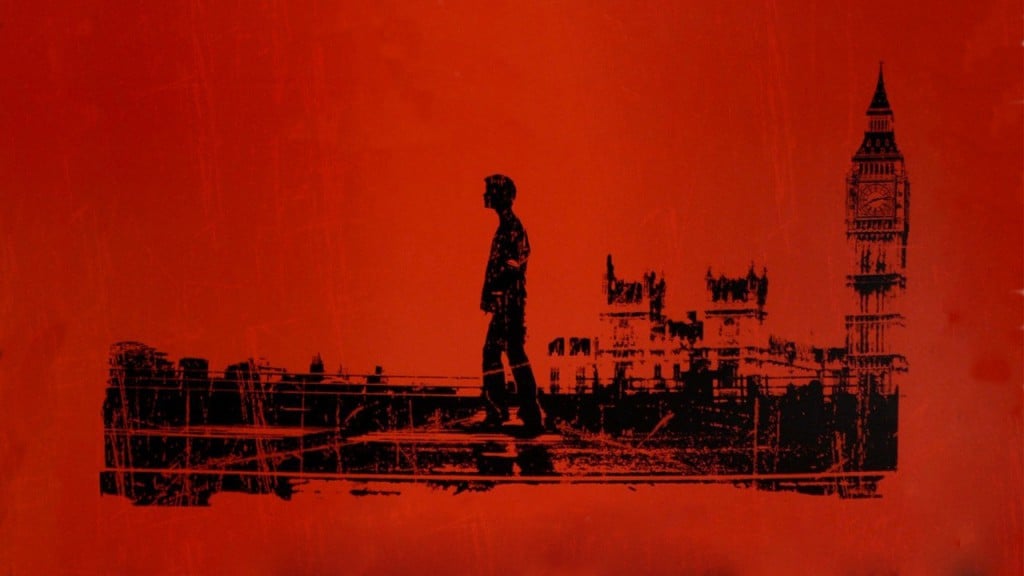 Surely, I’d seen Shallow Grave in 1994, and greeted it with a very negative reaction, but it wasn’t until 2003 where I was truly introduced to Danny Boyle. I fondly recall going to the movies and being subjected to a teaser trailer to Boyle’s 28 Days Later. The trailer, like the film, was frantic and horrifying and it peaked my interest to where it was all I thought about for months. In the summer of 2003, I managed to see 28 Days Later finally.

It happened to be an even more interesting experience than I ever imagined because I’d seen it a week before I had to have mandatory open heart surgery. To say that I was in a rollercoaster of emotions while watching 28 Days Later is an understatement of the highest degree. Knowing I’d be a cold body on a table for half a day while staying alive by machines is a notion I still shudder at. So it’s only apt and kind of ironic that 28 Days Later is met with its primary hero who awakens in a hospital after nearly dying in a coma.

Danny Boyle’s methodology of filmmaking is often surreal and deeply spiritual. Even a film about the end of the world with ravenous monsters feels like a journey of the soul, and 28 Days Later transformed in to one of my favorite horror films of all time. Truly, it’s not a zombie film per se, but it remains one of the most influential horror films of all time that managed to completely convert me in to a fan boy for Boyle, Cillian Murphy, and the entire cast of the film.

Director Danny Boyle doesn’t just explore the vicious after math of the apocalypse, but the mental aftermath as well. In one scene he visits character Jim in his mind in a horrible dream where Jim envisions being left behind by his comrades. He’s left to fend for himself in a serene albeit dangerous landscape, and is awoken by the lovable Frank. We also gain an insight in to Jim’s past as he eerily thinks back to a time where he was happiest with his parents. There’s also the subtle examination of the youngest survivor Hannah who, by the finale, is so shell shocked and traumatized she barely responds to the terrible danger she’s in. 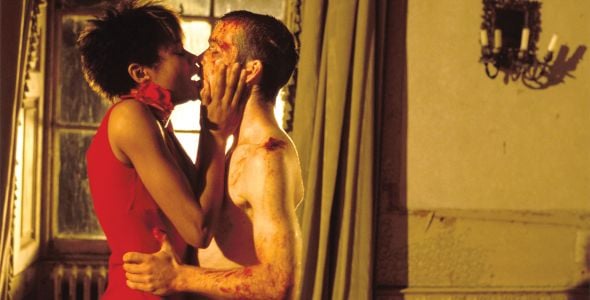 As demonstrated by his creative colleagues Joss Whedon and Robert Kirkman, director Danny Boyle introduces us to a dark and unforgiving new world where no one is safe from this new disease. Codenamed ‘Rage,’ this speedy and disgusting infection is spread by well meaning animal activists. Assuming they’re helping trapped primates being experimented on, they instead unleash a disease that is unbiased, violent, and spells the end of the civilization for all of England.

We’re later introduced to Selena and Mark, two survivors in the aftermath doing whatever they can to survive, who delight in killing two of the infected monsters, and saving Jim. They feed him and give him a nutshell explanation of what has happened. The world is over. The remaining living are either fighting to survive, or are red eyed ravaging beasts who do nothing but destroy everything in their paths. The smooth talking, clever, and quick witted Mark is later wounded in battle, and is murdered by the unflinching survivor Selena who hacks him to pieces despite his pleas for mercy.

Your wife, your son, your daughter, your father: You’re given only thirty seconds to decide how to deal with them. You can either run for your life in such a small window, or you can stand there and murder them before they lunge at you. During that time the infected become walking germs, dripping from every orifice, and display the embodiment of anger. Their eyes are blood red and drip blood, and they spew bile from their body on to anything in sight. Those unlucky enough to survive an attack become a new host. 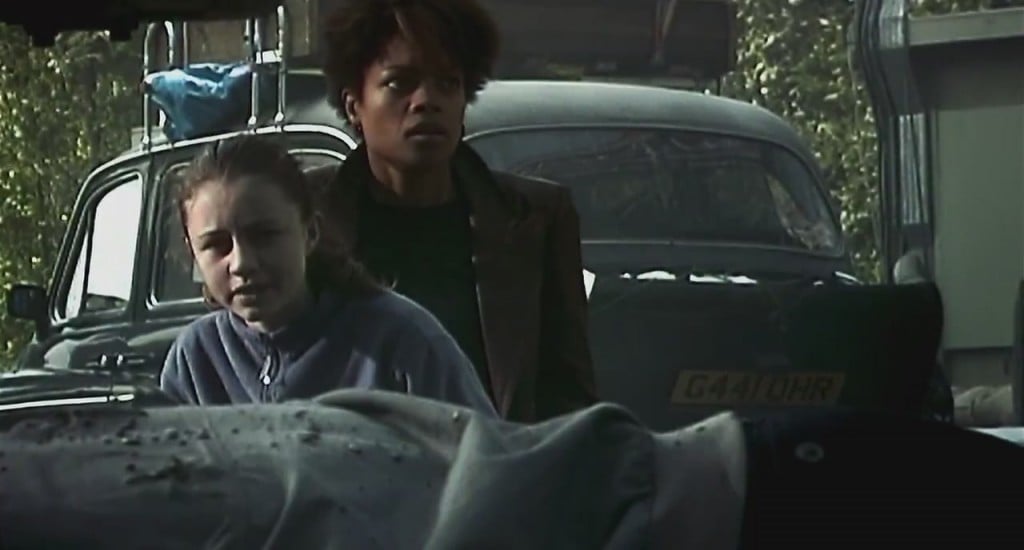 28 Days Later is based heavily on misdirection and takes advantage of those moments to really enlist a ride for the audience that they can take home with them. The opening animal rights activists should be people we can root for, but their lack of information ultimately spells doom for them. We should be happy to see the military and their huge base filled with land mines, but their plans for the survivors is ultimately a horrible and perverse one.

There’s also the implication that the rage virus is in some ways a virus the humans submit to and somewhat revel in, when Jim faces down a young infected boy who screeches “I Hate You!” There’s also the finale in which Jim is able to become a merciless warrior when he submits to his own form of personal rage. 28 Days Later had big budget aspirations with director Boyle hoping to cast Leonardo DiCaprio and then Ewan McGregor for the roles of Jim.

But it’s the casting of somewhat acclaimed but barely known characters actors that work to the film’s advantage, giving it that realism that George Romero strived for with his Dead film series. Cillian Murphy with his lanky build and striking eyes is a character who barely makes it out alive through most of the film, and survives on good deeds from everyone around him. Meanwhile Naomie Harris with her frizzie doo and handy machete is the perfect heroine for the apocalypse. And perhaps a precursor to Robert Kirkman’s Michonne from The Walking Dead.

You also have to adore Brendan Gleeson as Frank, the lovable large patriarch of the group who mercifully saves Jim and Selena’s lives based on sheer good will, and suffers a gut wrenching fate that I still have difficulty watching. Even on my one hundredth viewing of the film. Boyle’s horror story is peppered with brilliant character actors, all of whom have something great to lose, and just can’t find it within themselves to lay down and die.

I am awestruck by the film’s inherent spiritual base every time I watch it, and adore Danny Boyle’s choice for the score which is often based around music involving choirs and organs that lend this situation as something of a re-awakening for the character of Jim, who awakens from a coma and walks out of an empty hospital to learn the world around him has ended in a little under a month. Even the back story behind 28 Days Later is compelling with the unusual alternate paths Boyle and Garland almost took in the story.

While I do love the ending that opens the door for a sequel, I wish Boyle and Garland had stuck to their guns and opted for the grim and soul crushing alternate ending where Jim is taken to the hospital after being shot by Eccleston’s character and dies on the stretcher despite Selena’s best efforts to save him. Draped in darkness and wielding their guns, the girls leave Jim’s corpse in the hospital strewn on a stretcher. The very place he awoke in. And they both walk off in to the darkness of the hospital’s corridors, ready to fight another day without their male compatriot.

28 Weeks Later is a fine follow-up with an equally great cast, but director Danny Boyle’s original apocalyptic horror film is a rich character study, a bold examination of the good and evil humans are capable of, and the daring twists and turns Alex Garland takes with his almost painful punishment of characters we grow to love. It’s a horror film that, even ten years later, is proudly placed on my Top Ten Horror Films of All Time. And deserves to be lauded as a milestone in new wave horror. As well, it also opened me up to the wider scope of Danny Boyle films and what immensely spiritual and complex work he’s capable of.