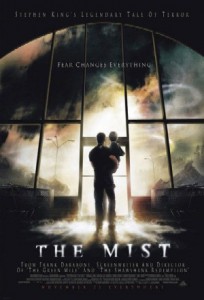 The professional relationship between filmmaker Frank Darabont and author Stephen King is perhaps one of the most notable collaborations in modern cinema, a tale of hero worship turned ostensible business partnership. So many ships it’s a wonder none of the films produced as a result were ever set at sea. A young aspiring filmmaker with untold cinematic vision and a fondness for Maine’s most famed son, Darabont earned his ticket to the big time through the sheer verve and passion of his pitch to King regarding his short story Rita Hayworth and The Shawshank Redemption. Parallel to this, King’s sentimentality for such ambitious upstarts meant that the resulting sleeper hit resulted in two of his books becoming legendary motion pictures. Over the course of three such enterprises, Darabont managed to showcase the full spectrum of King’s work; from drama to supernatural drama to supernatural horror drama.

While Shawshank is the most celebrated (top of the IMDb rating system in fact), and The Green Mile the most viscerally resonant, it is the darkest end of said spectrum which provides their most telling creation, and also their least loved. Although King is of course better known for The Shining and Cujo when it comes to horror, the cinematic tour de force which is 2007’s The Mist perhaps best summarizes just what it is that makes his work so engaging, and likewise provides the best example of Darabont’s near telepathic understanding with his scribbling mentor. Even today after some six years to clear one’s head of the shock, the film’s conclusion is still its most memorable quantity, and this in turn provides a significant and amusing look into team Daraking. Having concluded his novel with a characteristically grim, ambiguous ending, King looked upon the sheer nightmare of dark and brutal ironic tragedy that Darabont put forth and cheered, openly wishing that he had thought of it instead. A match made in heaven apparently. 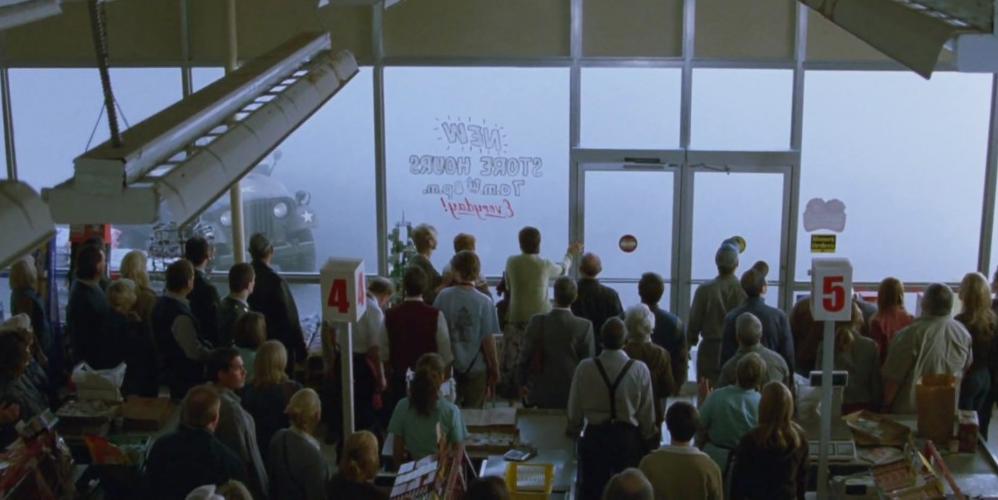 The film’s ending is a sledgehammer to the chest, pulverizing in its impact and almost irresponsibly bold in its creative choice. Darabont had to suffer reduced backing due to his refusal to back down over it, something which, to his enormous credit, doesn’t show. In the classic King styling, we find ourselves in small town Maine, where one night the citizens are rocked by a huge storm which uproots trees and costs them their electricity. The following day, they gather at the local supermarket to collect supplies when a mist closes in. Jeffrey DeMunn’s Dan Miller bursts out of the strange atmospherics, blood pouring from his nose and verbalized hysteria from his mouth. “There’s something in the mist!” he cries. Apparently it has already killed someone. The patrons remain inside and close the doors. Anybody who ventures outside is never seen again, only heard through their horrific screams. And for much of the movie, this is all we really know for sure. There’s something in the mist.

What happens instead is what defines The Mist not only as an adaptation heartening in its loyalty, but also as a horror movie with its focus firmly rooted on the right marks. Of course the creatures, as they are creatures, will eventually unveil themselves as nasty works of CGI who lay waste to their human prey, but this provides little more than window dressing (albeit for a precariously large window). Instead of aiming the lens at the disaster gripping the town and the potential action to be found there, Darabont’s attention is drawn towards the myriad of locals stuck together in the supermarket and how they find themselves coping with the most unique and diabolical of circumstances. It is here, within the various cliques and factions and respective conflicts within an unlikely community, that Darabont finds not just his drama but the heartbeat and soul. Thomas Jane’s David, erstwhile and amiable film poster artist guarding his young son and providing natural leadership, may be the main protagonist but he is far from the only voice.

The choices made are unthinkable by Hollywood horror standards; 90% of the film’s length is set in a single location, the shop; it takes almost a full half hour before we even get a glimpse at exactly what lurks within the mysterious mist; the first ‘attack’, the moment when the characters realize their situation really is life or death, is followed by a lengthy exchange as the witnesses debate how best to break the news to the others, which in turn is followed by a painfully believable sequence of disbelief, suspicion and disgust at perceived tomfoolery. Risks, perhaps, but not of creative measure. The simple truth is that the set up for The Mist is, although certainly interesting, very heavy on cliché and unoriginality. Talk of parallel dimensions and windows into other worlds behind our own don’t mask the fact that the threat is straight out of the annals of much told creature grisliness. Were it told conventionally, the film would have been forgotten as soon as it was seen. Unconventionally, with dialogue heavy scenes choosing to think about just what people would do when faced with such a conflict, it because a hypnotically engaging experience.

People don’t simply pull together to reduce individual threat, as they should do, because that is not the world we live in and that is not how we behave as people. The local neighborhood fruitcake preaches that the mist is the end of the world, God’s retribution for the sins of his children. At the other end of the philosophical spectrum, the big city attorney with a chip on his shoulder about inverse-snob bumpkins blithely refuses to accept any truth in the situation and falls on his sword as a result, taking others drawn to his logic and charisma with him. When the chips are down, three young soldiers previously poised to go on leave become the scapegoat for undue anger and blame by a terrified mob quickly losing their collective nerve. The sheer verve of misanthropy that runs through The Mist is rare to see in any motion picture, especially one of this type, and is best personified by a pointed discussion between a group of the survivors. “As a species we’re fundamentally insane” Toby Jones’s polite and mannered cashier says in utter sincerity “Put more than two of us in a room, we pick sides and start dreaming up reasons to kill one another”. 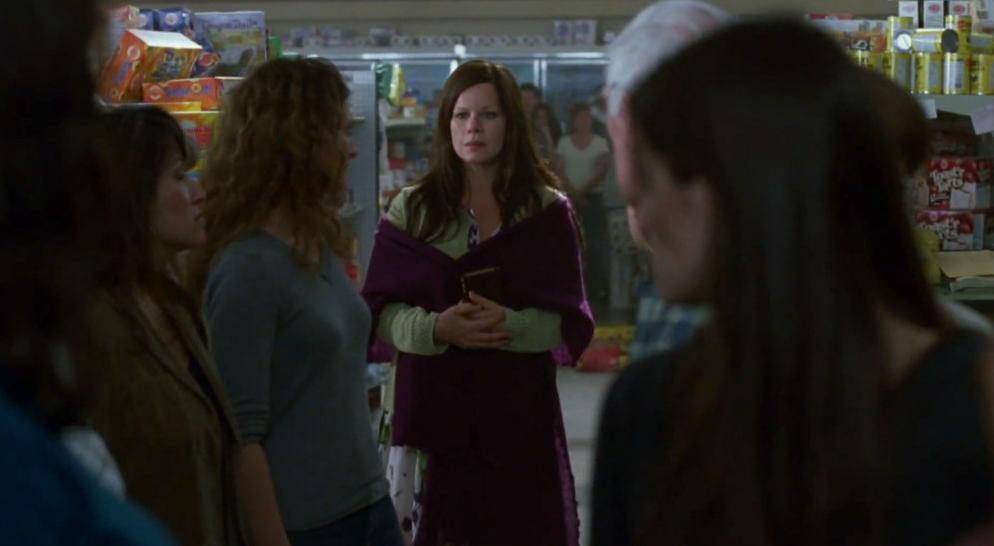 It’s not the cynicism that makes the characters so believable and memorable, however, but the fact they are treated to such beautifully natural dialogue straight off of King’s fingertips. Dialogue, it should be added, that is delivered to perfection by a brilliant cast of actors almost uniformly recognizable without the baggage of being huge stars. As well as Jane, always reliable as a leading man able to generate empathy from the audience, there is terrific work from the likes of Laurie Holden, Andre Braugher, Jones, Frances Sternhagen and Darabont keepsake William Sadler, whose personal arc through the various stages of coping is one of the screenplay’s best subplots. Credit is due to youngster Nathan Gamble, one of the more memorable child actors of recent year movies, and a special mention of course has to go to the wonderful Marcia Gay Harden as the aforementioned Old Testament thumper Mrs. Carmody, a perfect example of the damage done when a fractured mind is given sufficient voice to preach untruths. A significant portion of the film concentrates on the growing divide within the store as Carmody’s lucky predictions earn her a growing, carnivorous following that separates them from the rational believers led by David. It is an interesting examination of religion as a concept, not a criticism of it, and this kind of observation of humanity is where the real horror comes from.

As such, the film’s two most horrifying scenes come from the actions of people, not the bugs at their door. Having discovered that a nearby military base may have created the catastrophic mist, Carmody and her herd turn their fury on young soldier Jessup, singularly blaming him for all that has happened. Grabbed by a traumatized mob whipped up words of hyperbole and hysteria from their shepherd, Jessup is beaten, stabbed and tossed outside to be at the mercy of the creatures. His tears and pleading to be allowed back in, to be saved, fall on deaf ears as they watch gleefully their fellow man grabbed by one of the bugs and torn away to be feasted upon. The second, naturally, is the ending. Hardly a display of the worst of humanity, it instead plays as the sheer risk in giving up, assuming all is lost. Ironically, in such a cynical piece, the final tragedy is the consequence of abandoning hope and second guessing how fate will pan out. Too bad for David, and for us. 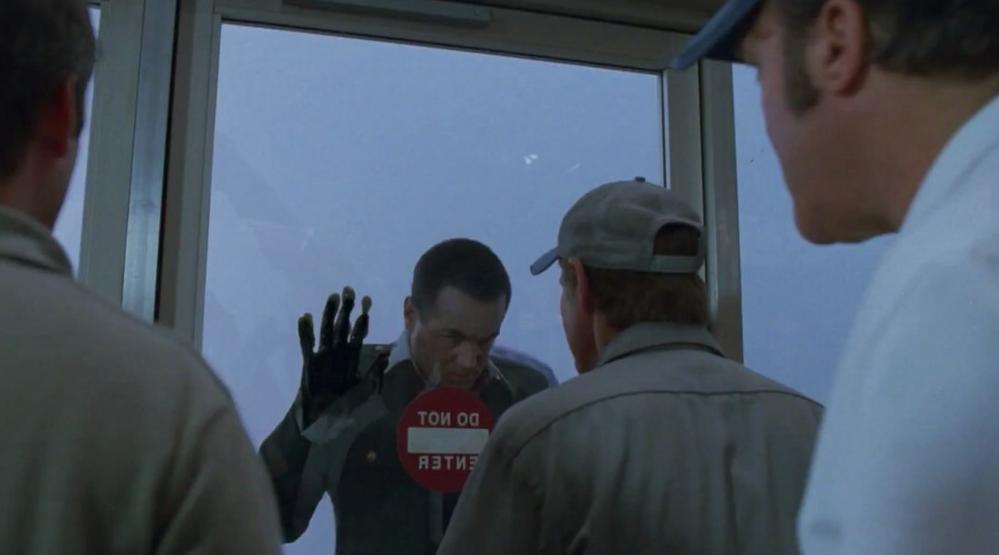 Whether this ending would have quite the same impact had the static journey that preceded it not been so engorged with personal drama and attention to character is doubtful. Similarly, the sheer dread generated that made the build up so grim and hopeless likely would have fallen flat had the film not chosen long lasting suspense and unbreakable tension instead of shock tactics. These are the traits which really are the best of Stephen King, his finest attribute as a writer, and they are also the clear strengths for Darabont as a filmmaker. Combined, a horror film that’s more of a drama becomes more horrifying that the gore fests and jump scare ghost stories because it nails one of the key aspects of a good genre piece; care about your characters, or your audience won’t, and then nothing is actually scary at all.

After already working towards two modern gems together, King and Darabont scored a third huge victory which shouldn’t be undermined by criticizing the ending out of context. Brutal and unforgiving, emotionally heartbreaking, it matches the piece perfectly and is simply how it ends. Getting there is the real joy. As a horror, a drama and as a film, The Mist is truly sensational.