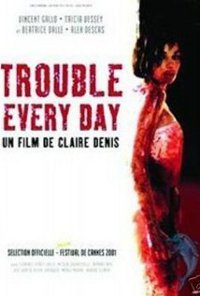 Rarely enabling itself to be clearly defined or labeled, Trouble Every Day is an oppressively quiet and poetic subversion of the horror genre from French auteur Claire Denis. The small cast floats in and out of this Parisian world in an isolated malady that expands when agitated. Denis has never been interested in traditional storytelling, and this is perhaps the closest she’ll come to delivering a traditional genre work. Always concise and primarily elusive, this 2001 film may seem like a glaring outlier in Denis’ oeuvre, but it’s solely comprised and rightfully at home within the director’s filmography. The usual horror tropes aren’t contained within Denis’ somber depiction of addiction, but rather, a tragic telling of the ability and inability to love shown through the director’s identifiable elliptical and stylistic traits.

Given its relation to a more routinely established genre, Trouble Every Day may not work its cerebral magic on Denis-newbies as it takes some time settling into the film’s conflicting arcs and Denis’ playful toying with expectations. The film follows Shane (Vincent Gallo) and June Brown, an American couple honeymooning in Paris in an effort to patch up and nurture their new life together. The two share and occupy an uncommon and rigidly defined spacial separation. After all, Shane has brought his bride to the City of Light for his own personal gain: he’s seeking out Léo , a former colleague and self-exiled expert in human libido, played by Denis regular Alex Descas (35 Shots of Rum, No Fear No Die). Shane’s fate is inevitably linked to Léo’s predatory wife Coré, played by gap-toothed beauty Béatrice Dalle, who periodically escapes from her secluded home to seduce and literally consume passing motorists, leaving Léo to clean up her mess. 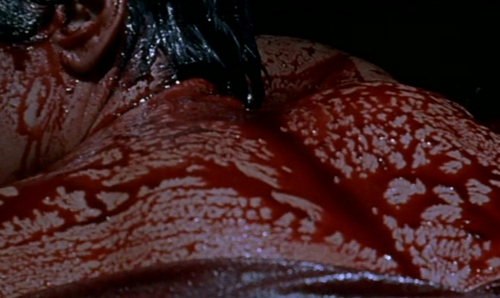 Denis is able to inexplicably humanize such characters as Shane and Coré, each of whom gradually appear beyond repair throughout the film. Their contrasting arcs resemble the core of the film’s taxing minimalist narrative, Shane is able to somewhat control his lust, while Coré’s carnal urges for blood cannot be contained. In one of the film’s more tragic sequences, Shane flees to the bathroom to furiously masturbate in the middle of a seemingly romantic and rare encounter with his wife. In a film where silence reigns supreme, there’s nothing more troubling than June’s voice calling out for her husband in the middle of said act. There’s little in the way of delving into the disease that possesses Shane and Coré, yet their impulses are so much a part of them that the film’s ambiguous nature seems completely irrelevant and true.

The photography from Agnès Godard and a disquieting score from Tindersticks (frequent Denis collaborators) add to the coldness of the film; close-ups amount to very little, suggesting an unknowable horror to these characters and humans in general. Trouble Every Day grows increasingly challenging at the same time that it begins to open itself up. Denis enjoys delving into the inconsistencies of the human condition, as the dual relations between Léo and Coré, and Shane and June are free of identification. There’s a sensual quality to the film that is distinctly Denis. Bodies are invaded upon and filmed with great detail, even in the film’s most “horrific” sequence, which results in a brutal display of sex and cannibalism brought on by an intrusion into Coré’s home, a scene which doesn’t occur until an hour into the film, again displaying Denis’ build up of mood and tension which is ghastly unleashed in the second half.

There’s a rarity in the work of Claire Denis, a filmmaker so prescribed and willing to engage and make us feel, a trait that is rare these days in cinema. While Trouble Every Day isn’t particularly great (though engaging, it’s a brutally cold film), it displays a confident experimental departure for its director while also retaining some of the genre’s most crucial elements. It’s Denis putting her own spin on horror, and that alone is what causes Trouble Every Day to be so endlessly alluring. 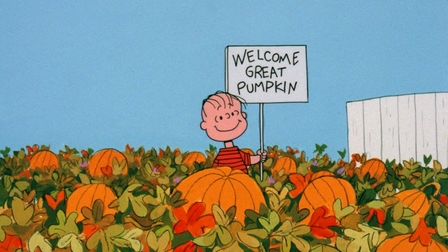