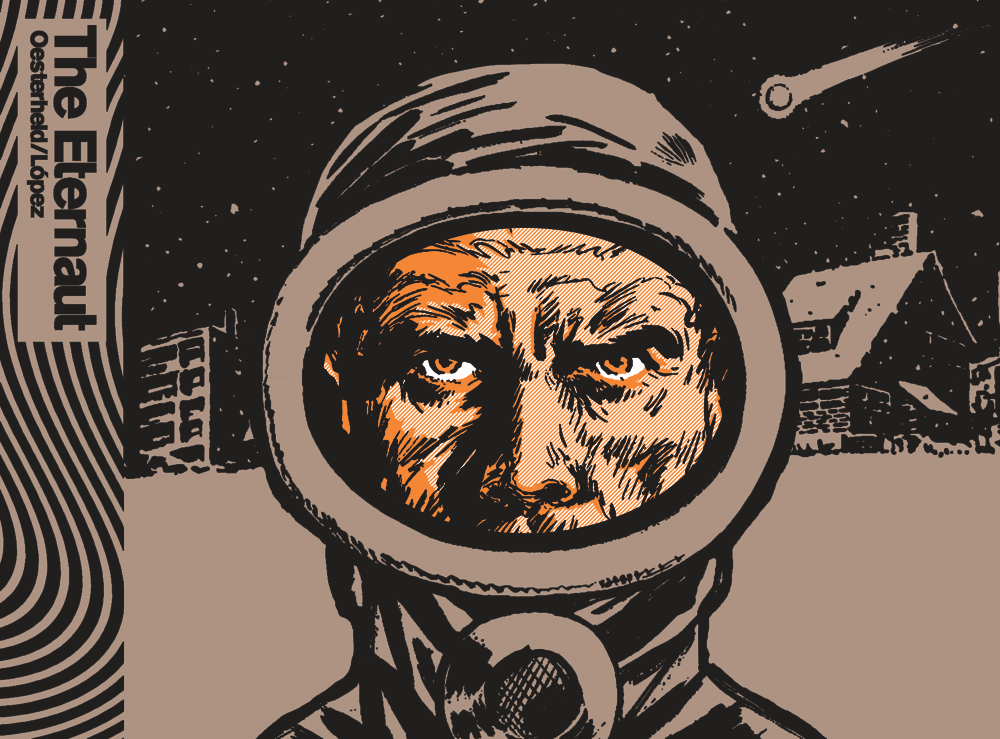 Four neighbors play cards in a suburban attic. It’s nighttime and the city outside rustles with distant noises. A news bulletin on the radio warns that a radioactive cloud, the product of continued American nuclear tests in the Pacific, is moving southwest. We’re in Argentina, during the 1950s, at the height of the Cold War. The players resume their game, until they’re startled by a crash or a scream, followed by a blackout. They walk to the nearest window and, past the glass, discover a desolate street scene of totalled cars, dead bodies, and – most eerily of all – phosphorescent snow. The protagonists assume the freak event is related to the radioactive cloud and make sure all the windows in the house are closed. Yet one of them fears for his wife and children, who can’t be reached on the phone, and recklessly sprints outside. The “snowflakes” touch his skin and enter his lungs; he doubles up and dies. As his friends soon learn, this is not a common storm nor a radioactive cloud, but the first phase of an extraterrestrial invasion. So begins one of the most celebrated, most cherished comics in Latin America, The Eternaut.

It was written by Héctor Germán Oesterheld, illustrated by Francisco Solano López, and released as a serial between 1957 and 1959 in the weekly Argentine magazine Hora Cero. “It’s the best adventure story this country has produced and the most enduring myth that Argentine narrative has conceived in the second half of the twentieth century,” said author and essayist Juan Sasturain. In the same vein, writer and journalist Fernando Ariel García called it “an aspect of our national identity.”

See also  MIFF 2012: Is “Normal School” more than just an underachiever with potential?

The Eternaut has been published in Portuguese, in French, in Italian, in Greek – but never, until now, in English. Translator Erica Mena and Fantagraphics Books have at long last corrected this with a gorgeous deluxe edition. The critical response has been glowing. National Public Radio considered it a “masterwork.” The Guardian wrote it’s a “brilliant comic.” Paste waxed lyrical about its political undertones. The Beat tagged it as the “most interesting graphic novel of the season.” It would seem that, after more than half a century, the Argentine classic has finally made its splash on the Northern Hemisphere. 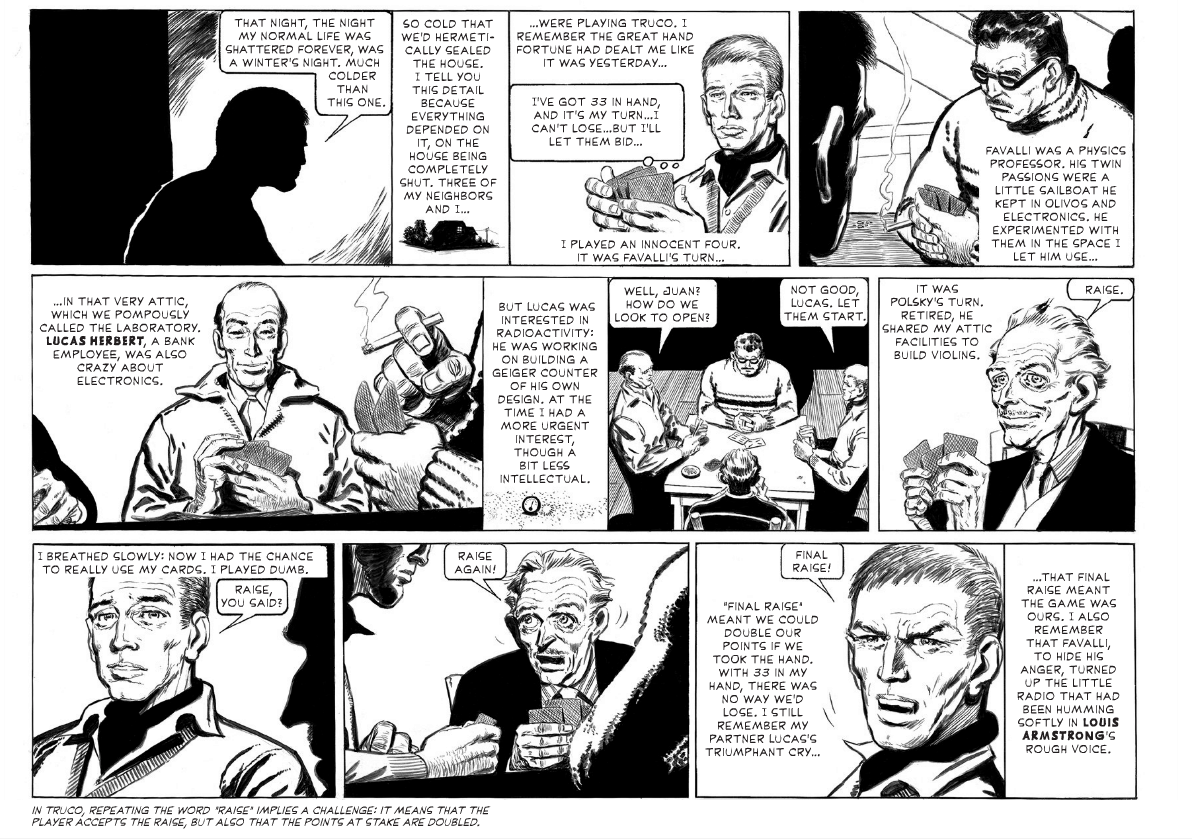 But why did it take so long? “I’m not really sure,” says Erica Mena. “Usually when texts aren’t translated it’s for one of three reasons: lack of publisher interest in the target language, complications with the rights to the text, or lack of interested translators. I can’t speculate on what the reasons were for The Eternaut, though, because I really don’t know.” One possibility, perhaps, is that such comics are simply logistically challenging to import. “It’s an enormous and wordy graphic novel,” says Gary Groth, co-founder of Fantagraphics. “So the difficulties related to producing a translated book are compounded by the sheer immensity of it – the translation itself, the production work involved, the rights to the work which, because it involves heirs, can be hairy, and the amount of physical production work necessary.”

Argentine readers – even those (or especially those) who haven’t read it yet – approach The Eternaut with reverence and a little bit of caution, as one does any canonical masterpiece. English-speakers, however, will tackle it without such baggage. (It’s telling, for example, that Shea Hennum, at Paste, writes that Oesterheld is “one of the best kept secrets in comics,” a claim that, while accurate in a North American context, sounds utterly ludicrous to my Argentine ears.) What might they find, then, in this old but still relevant comic?

“So much! Everything, really,” says Mena. “The art, while at first glance may seem a little dated, is just gorgeous: the hyper-realistic detail and expression is entrancing. The story and the characters are pretty different from what English-language readers might expect from an action sci-fi story, too. There’s a nuance, and a communal mentality, that is substantially different from the loner-hero exceptionalism of many English-language action comics.” We mostly follow Juan Salvo, one of the card players and (later) the titular time-travelling eternaut, yet his comrades are equally worthy of our attention. “There’s no single protagonist. There are many secondary characters who are just as important,” says Laura Fernández, author of the book Comics and Resistance: Art and Politics in Oesterheld (1968-1978).

What’s fascinating about The Eternaut is how, even as it resembles American science fiction of the era, it subtly subverts the genre’s conventions, often redefining them in South American terms. “Up until its release, science fiction stories consumed in Buenos Aires, both in literature and in comics, weren’t actually set there,” says Fernández. “It was transgressive to do science fiction, with aliens, and have it all happen in Buenos Aires, in recognizable places.” 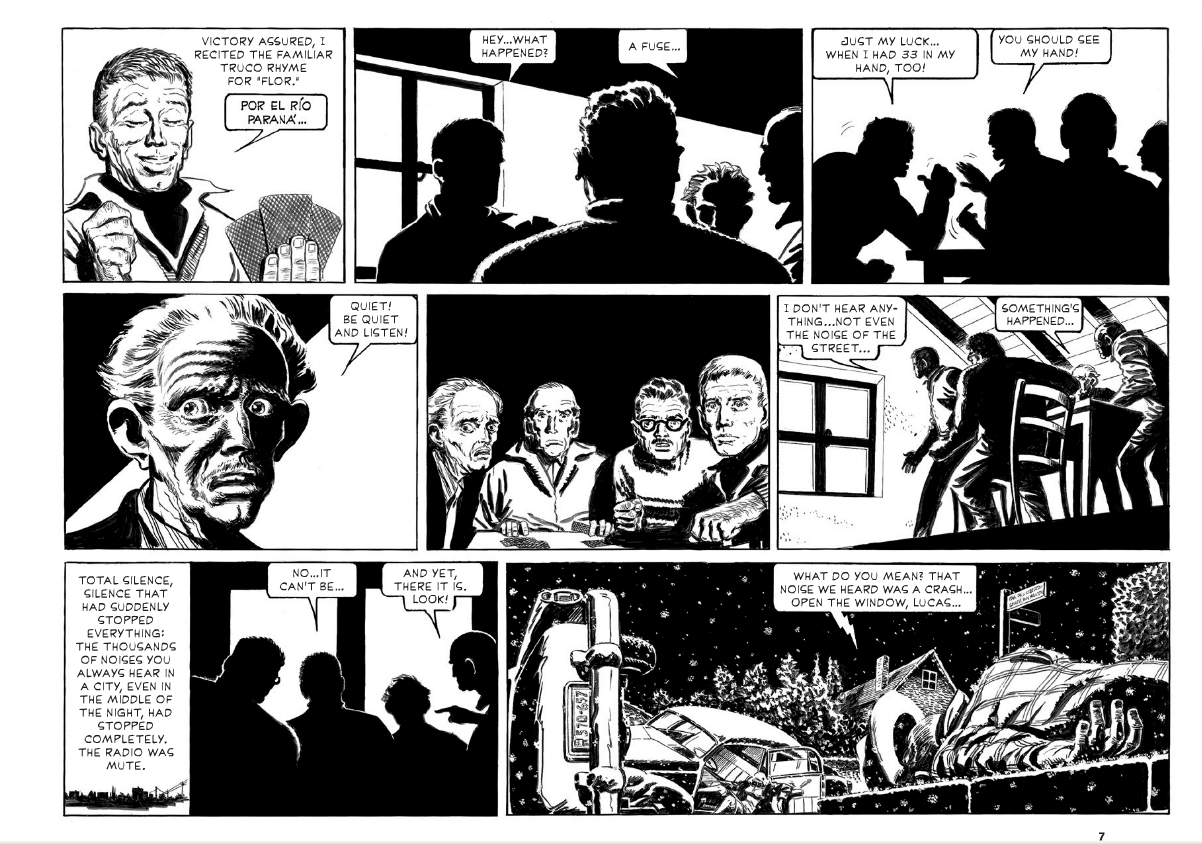 This geographical shift is not merely cosmetic. As the opening scene already suggests, with the news bulletin about the radioactive cloud, the characters are always discussing the real or potential stratagems of distant world powers. When the invasion grows more apocalyptic, they come to wonder if the United States, Europe, and the Soviet Union still exist. (Communications are either down or sporadic, so the situation beyond Buenos Aires is unknown.) One of the main themes of The Eternaut is this point-of-view from the presumed sidelines, the sense that such desperate fights for the future of humanity are not supposed to happen – and yet are happening – at the bottom of the world, all the way down in Argentina. “It’s about being marginal, being at the periphery,” says Fernández.

How will this aspect of the comic register with North American or European readers, many of whom have never set foot in Buenos Aires and have no hope of recognizing pivotal landmarks like Plaza Italia, Estadio Monumental, Barrancas de Belgrano, and Plaza de los Dos Congresos? “I expect that most readers will accept the foreign landscape much as they might accept an imagined landscape, and the action of the story will carry them through it,” says Mena. “In other words, they will notice, but not in the way that Argentine readers do. And that is part of the violence of translation, a translation dismembers the text from its cultural body; in this case the most apparent missing link is that of the city-scape. For an Argentine reader to see and imagine their city so transformed would be a vastly different experience than for them to see and imagine, say, New York City, transformed by alien invasion. But how much of contemporary sci-fi is set in cities that English-language readers resonate with in that way? Isn’t it good for English readers to recognize their own foreignness, sometimes? I think it is.”

Beyond language and cultural competence, however, another matter to consider is the book format itself. As described before, The Eternaut was released in instalments over a period of two years. Yet modern readers, from any country, including Argentina, will invariably tackle it as a graphic novel. This transforms how the narrative structure is experienced. “I think reading it as a novel makes reception easier both for English and Spanish readers, and really doesn’t work against the initial intent of the work, which is to tell a single, overarching, and unified story. That it moves so easily from serial to novel form is another testament to the brilliance of Oesterheld’s script.”

Indeed, although the episodic, stop-start nature of The Eternaut is hard to miss, it’s impressive how well it flows. Much of the story happens in the span of a few days, as the survivors of the invasion slowly creep their way across the ravaged terrain of Buenos Aires. Those familiar with the city’s layout can easily trace their path on a map. That this patient and smooth movement of bodies and plot points was actually orchestrated in short fragments, over months and months, is astonishing. “There’s an almost musical quality to character growth and storytelling rhythm,” says Fernández. “You lose sight of that in its original serialized form.”

Nevertheless, despite its narrative prowess, there’s no telling how The Eternaut will fare with English audiences. After all, its reception in Argentina has hardly been linear and predictable. Released shortly after a coup ousted president Juan Domingo Perón in 1955, it was savored by teenage readers and interpreted as nothing more than a rollicking adventure story. Yet, in the ensuing years, the political temperature in Argentina only continued to rise, as pseudo-democratic governments were succeeded by increasingly sanguine military regimes. This overheated context would affect The Eternaut. “When it was reprinted in the 1970s, it came with a prologue that positioned the comic politically,” says Fernández. “Oesterheld was in a very political moment in his life. So he gave his work new meaning.” Shortly afterwards, he would also release an unambiguously belligerent sequel, still unavailable in English. By that time, Oesterheld had become linked with the radical group Montoneros, eventually decimated – along with tens of thousands of victims – by the bloodiest of all dictatorships in Argentina, the so-called Process of National Reorganization. The author, along with his four daughters, entered the ranks of the disappeared. 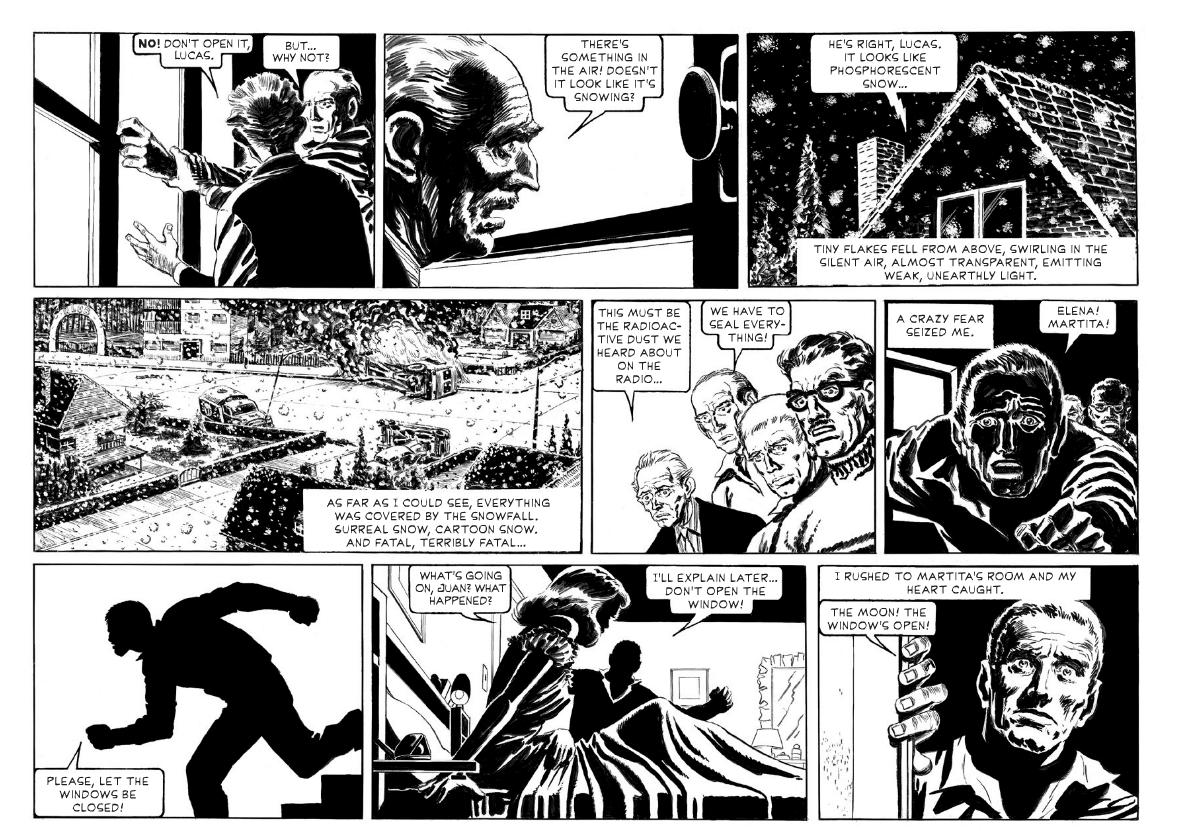 After the return to democracy, in the 1980s and 90s, The Eternaut cultivated a new readership, with some leftist activists adopting it as an “anti-capitalist narrative, set against the imperialist system.” But its admirers were found only in certain circles. “Comic fans, intellectuals, militants all read it. But it wasn’t that popular on the streets,” says Fernández. Yet, following Argentina’s economic collapse in 2001, the venerable classic was reborn. It was reprinted in 2004 by the Clarín media group, as the fifth entry into its Comics Library series. Street artists began referencing it in their politically-charged works. And, most famously, the figure of Juan Salvo in his homemade diving suit, built to protect him from the deadly “snowflakes,” was appropriated as a symbol by the followers of former president Néstor Kirchner. Now ubiquitous in modern Argentina, the comic has moved to foreign markets. Fernández recalls how surprised she was, for instance, when it was recently embraced by Brazilian readers, unaccustomed to Oesterheld’s brand of “serious science fiction, in black and white, with a pessimistic and very local outlook.”

What’s next in the checkered, topsy-turvy history of The Eternaut? Whatever the answer, the important thing is that, yes, the revered Argentine alien invasion tale is finally out in English. And that’s no small feat. “One of the points of good art is to open our eyes to perspectives and ways of seeing the world that we could not envision ourselves, and publishing work by foreign cartoonists simply gives us the opportunity to introduce American or English language readers to a wider range of such perspectives,” argues Groth, of Fantagraphics. And for Erica Mena, beyond all its history and canonical importance, The Eternaut is simply a great book. “Upon a first reading, in English, I hope that it is still an evident masterpiece, a work that both defines and exceeds its genre, a work that after decades is still important in its message and in its story.”