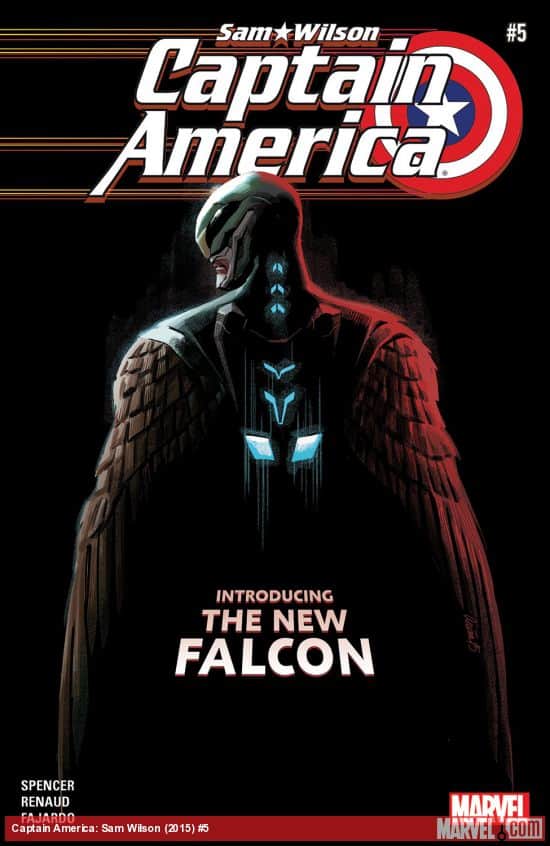 Like the cover boldly declares…we witness the debut of the All-New Falcon in a way that honors Redwing as Sam’s partner and makes sense for the story involving the Serpent Society that began in issue 1.

We observe the past and more Sam Wilson related events through the eyes of Joaquin Torres and his detailing of “that one time I saved Captain America’s life.” Joaquin has been affected by real world issues , ,such as run-ins with the United States border patrol and the flashbacks are quick to paint the picture of what he’s been through. More specifically, they focus on the genetic experimenting of Kaul Malus from issue 3, and how Joaquin been recovering with Dennis Dunphy aka D-Man since his rescue.

For the most part, Sam Wilson: Captain America #5 doesn’t feature a lot of…well Captain America (still in his Cap-Wolf glory) at all. Writer Nick Spencer switches his focus the background for characters like Rachel Leighton (aka Diamondback), and how they fit into the Serpent Society endgame plans. The Serpents’ plan is a lot more grounded as far as villainous ideas go, and Nick Spencer does a great job of making their plans similar to actual real life machinations. It leans on how some citizens are feeling given the political climate of the country.

It’s more than just twirling snake suits and telling of plans, Paul Renaud isn’t Daniel Acuña, but the art is in the same wheelhouse where the transition between them works. Renaud captures the faces in more emotional moments and the action shots of Misty Knight well. Teaming up with colorist Romulo Fajardo, he brings a grounded and sometimes colorful issue before our very eyes. Nick Spencer creates some fun comedy moments and also crafts themes and ideals that riff on some issues that are dividing the United States in 2016. He also fleshes out the new Falcon very well and references Redwing’s history of being there to help Falcon in times of need. Joaquin is wary of his new lifestyle as a genetic experiment and being involved in the larger world of super-heroes, but like all good characters, he puts that behind him all in the name of saving the life of one of the people that saved him and to make the best of the card he’s been dealt.

With the road to “Avengers Standoff” looming over the next few months, Sam Wilson: Captain America continues to forge its own path and make the most out of the new age, new look Captain America.