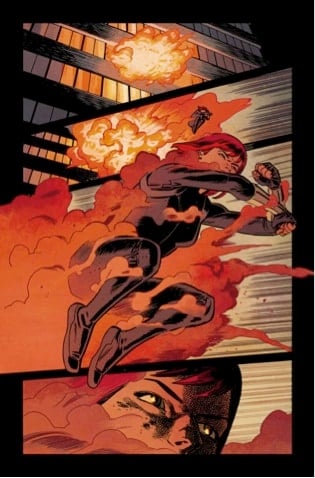 Mark Waid. Chris Samnee. Matt Wilson. Joe Caramagna. They are reunited and it feels, oh, so good. Daredevil was one of the few titles that Marvel released over the last couple of years that was consistent from day one until the very last issue dropped. The quality is due in thanks to the utter brilliance that each of the creative members brought to the table to make Daredevil fresh, exciting, dramatic, and downright a must-read month after month. The mere fact that the same team that made Daredevil is back, working together, makes, whatever title it is, an automatic desirable read. The awesomeness factor is only heightened in that the new book happens to be Black Widow.

After only about a quarter way through this first issue, it is safe to say that this is one of, if not the best first issue, so far, that the post-Secret Wars Marvel has released; the last page more than confirms this. The issue is light on plot but that is partly what makes it so great. Essentially, Natasha Romanoff, aka Black Widow, has stolen something from the interior of a S.H.I.E.L.D. helicarrier and a whole slew of S.H.I.E.L.D. agents rush after her to retrieve it. The script, by Waid and Samnee, is light on exposition and dialogue but heavy on the action and absolute frenetic pace; you may or may not need an intake of oxygen by the end.

Elevating the level of action are the beautifully choreographed set pieces through Samnee’s stunning line work. Samnee draws some of the best fight scenes in comics today. The use of tight, small frames allows for the action to really pulse, drawing in closer the punches thrown by and at Natasha. There are some really gorgeous splash pages and larger frames to allow for a little breather, accentuating the action that occurred beforehand and showcasing the nuanced, quieter moments that Samnee excels at. There is a particular great frame of New York City as Natasha hovers above it with the warm, yellow/orange sun providing light blue shadows amongst the tall buildings. Samnee switches from the stern, determined side of Natasha through intense close ups of her shadowed face and eyes, to the playful, fun side that truly shows how much she enjoys what she does and with such ease. Yet, there is still that dark, mysterious side to Natasha as well in which only time will tell whether this series will pursue that direction. 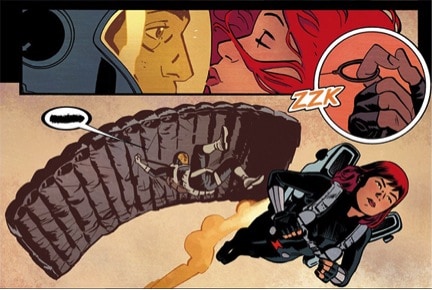 Speaking of colours, Matt Wilson is one of the best colourists working in the business right now. As much as the colour palette he utilizes isn’t very vast for this issue, his accentuated reds, from the flowing hair of Natasha to the damaging explosions, and light yellows and oranges really pop. Letterer Joe Caramagna may not have a lot of word balloons to deal with but is quite busy with the amount of sound effects. He playfully places them and widens particular ones to really make an impact out of the ‘bwa-boooom’ explosions and smaller ‘spak,’ ‘rnch,’ and ‘spak,’ to really draw a bodily reaction from some of the fight sequences.

Black Widow is off to a blisteringly great start that is simple but highly effective. More comics should take notes from the team of Samnee, Waid, Wilson and Caramagna to focus on utilizing each member of the creative team to make for a truly fun and exhilarating read that couldn’t possibly turn people away from picking up the next issue. There hasn’t been anything this fun and confident from issue one since perhaps Matt Fraction and David Aja’s Hawkeye. If there is some kind of poetic way to sum up Black Widow #1, it would have to be something directly taken from one of the S.H.I.E.L.D. agents as he chases after Natasha once she escapes from the helicarrier: “she turns a 40,000 foot fall into a ballet.”