Way back in 2002, Insomniac Games released Ratchet & Clank to critical fanfare. Several sequels and spin-offs later, the critical reception barely dropped an inch, with each release in the series making waves. Now that Insomniac’s decided to reboot the series, does the newest entry to the much-loved series live up to the legacy?

Ratchet & Clank tells a story that’s almost identical to the original game, though it’s being narrated by the fraudulent Captain Qwark, who series fans will recognise immediately. Because of this the story is embellished in fun and interesting ways according to Qwark’s perspective, though Insomniac stops short of doing anything really memorable with this narrative device, instead using it as little more than a new way to tell a familiar story.

As such, don’t expect much from the story of this game, especially if you’re a returning fan. While it’s totally competent it doesn’t do anything particularly interesting or engaging, and while there are some funny lines, the humour seems to have disappointingly been dialed down from previous entries to the series. 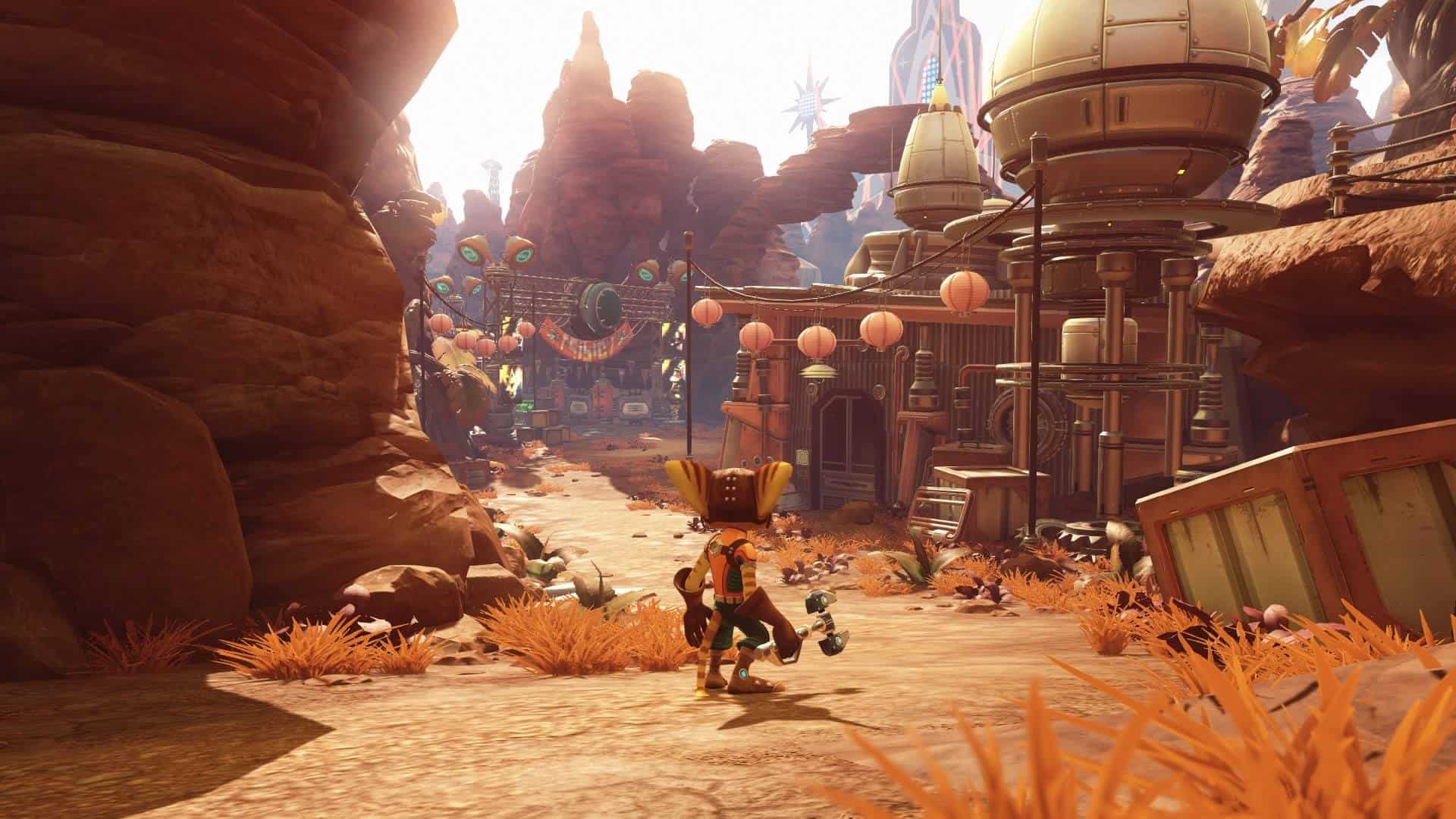 This is offset partly by the solid voice acting, but mostly by the incredible animation. Cutscenes are nothing short of Pixar film quality and are a treat just to watch, even if the story itself isn’t too gripping. Unfortunately this level of quality doesn’t extend to in-game conversations between characters, which are nothing more than dry over-the-shoulder exchanges with little animation and no camera movement. Ordinarily this wouldn’t be a big issue, but when the animation is so vibrant elsewhere these moments really stand out as being uninspired.

Outside of cutscenes and conversations, the game is simply gorgeous. While you can probably tell just from the screenshots, they don’t really do the game justice as each moving part serves to make every moment look as good (or better) than most animated films. Each planet carries a unique visual style, but desert canyons manage to look every bit as charming as bustling cityscapes.

I’ve played more games than I care to admit (“Played too many games” will probably be engraved on my tombstone), but I can say without hyperbole that Ratchet & Clank may be the best looking game I’ve ever played. It was hard to finish the game in a timely manner when I was constantly stopping to take screenshots of the environments. 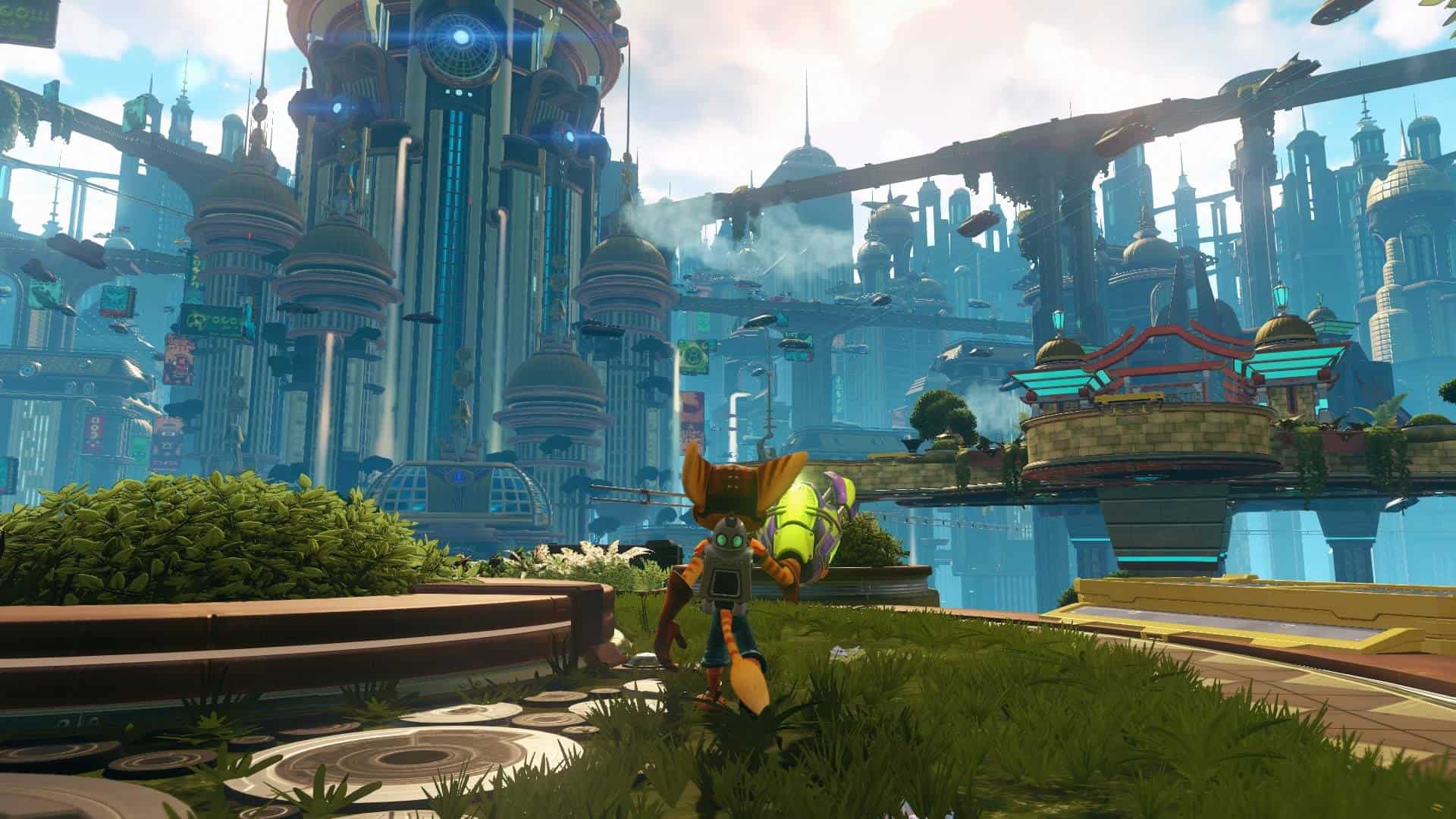 Luckily, I always wanted to keep moving to get to more of the addictive gameplay. Ratchet & Clank doesn’t deviate much from previous games in the series, combining a mix of platforming and simple third-person gun play. What makes this so interesting is the collection of bizarre guns to wield, from a short-range laser that turns your enemies into sheep to the “Pixeliser”, a shotgun that turns your enemies into, uh, voxels.

What makes these weapons even more compelling is how they can be combined; using the above example, it’s possible to turn enemies into sheep before hitting them with the Pixeliser, resulting in 16-bit sheep. While that’s not necessarily a very useful combo, it’s impossible to go into detail without spoiling any more of the load out. Suffice to say that there are plenty of interesting weapons to wield, including some returning fan-favourites.

These weapons can also be levelled up by using them, with each bit of damage dealt adding a little bit to their experience bar. Increasing the level of a weapon increases it’s performance, but also opens up new slots for upgrading. 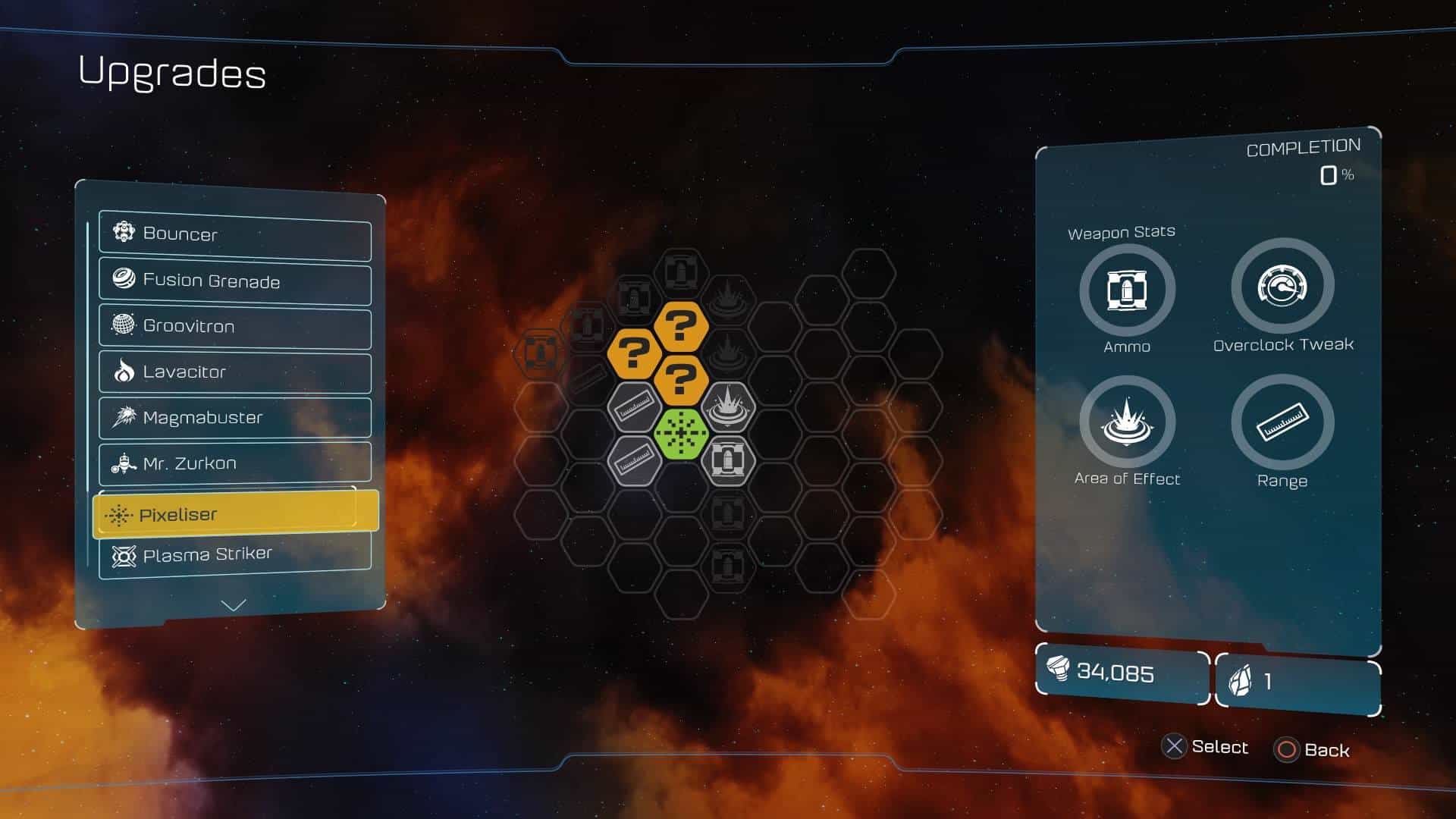 Weapon upgrades can be bought with “Raritanium”, which is as hard to find as it is useful. Upgrades range from the boring but useful, such as increased range or damage, to the much more interesting, such as adding cluster rockets or even a homing function to regular attacks. Upgrading weapons is key to success, but with such a huge range of weapons to pick from I felt discouraged from experimenting too much, lest I miss out on valuable experience points on my favourites.

Similarly, I rarely used weapons once they’d hit the maximum level, though this was more because I wanted to see how other weapons evolved. I did feel discouraged from using maximum level weapons either way, though, since they essentially amounted to wasted experience. Players who aren’t as worried about seeing everything the game has to offer may be less bothered by this, and it’s worth noting that enemies will respawn when revisiting a planet, so those willing to grind a bit will have that much more freedom of choice.

The one time I did feel the need to use my maximum level weapons was in the game’s weakest moments – boss fights. While there was usually narrative weight to the encounters, mechanically they never amounted to anything more than just larger enemies with far too much health. It’s worth noting I was playing on Hard mode (and found it to be a fun and not overly challenging experience), but the bosses simply had too much health, which led to a repetitive haul of dodging simple attacks and unloading whenever it was safe. None had interesting mechanics or mixed up the gameplay in any substantial way, and really added nothing of value. 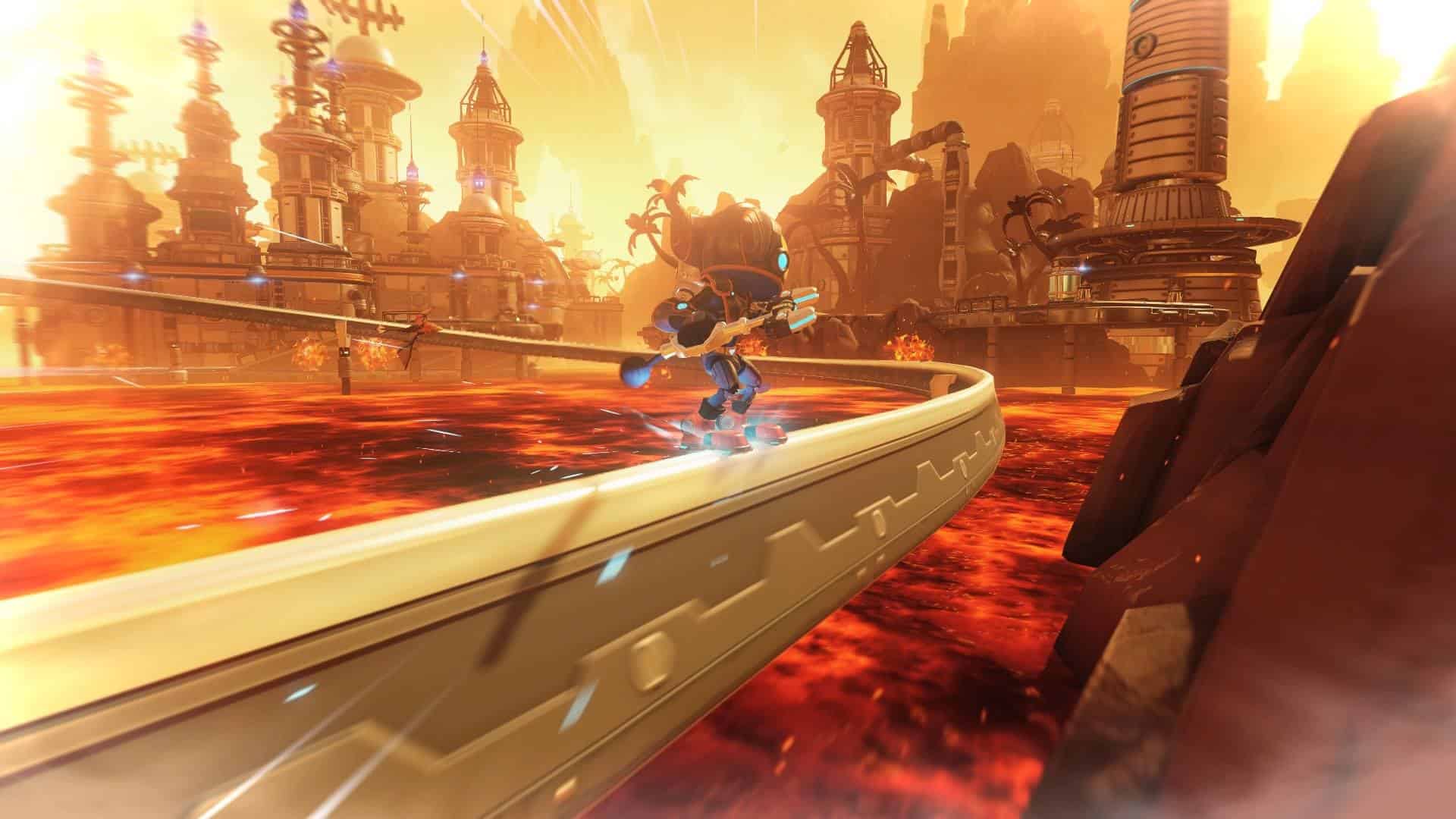 Luckily, the boss fights are a small part of a wonderful experience. Ratchet & Clank boasts an impressive amount of replayability, from the vast amount of weapons to experiment with to the “Golden Bolts” to hunt down that unlock cheats, there’s always something to do. Once the game has been completed players unlock “Challenge Mode”, a kind of New Game+ with extra challenges and weapon variants. While the game itself took me around 12 hours, it’s easy to see that number more than doubling for completionists.

In the end, Ratchet & Clank doesn’t offer anything that series fans haven’t seen before, but still manages to provide a fun and memorable experience. It’s an easy recommendation for anybody with so much as a passing interest in either the IP or the genre, and while it won’t make the same kind of waves that the original did way back in 2002, it’s every bit as much of a good time.