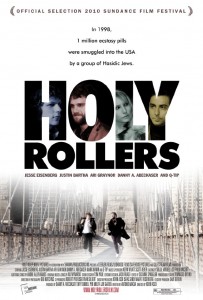 The title of this film does not refer to Pentecostal churchgoers. Rather, it refers to Hasidic Jews smuggling ecstasy during the late nineties. An unlikely story inspired by actual events (a market that Jesse Eisenberg, who plays Sam Gold, seems to have cornered), Holy Rollers is as much about pressure to succeed and build a family as it is about drugs.

Holy Rollers is an atypical drug movie. There are no car chases, no police investigations, no shooting, no envy of a high-roller lifestyle – few of the usual trappings of a drug film are present here. Rather, the film focuses on Sam, the eldest son in a Hasidim family, who is struggling not just to be successful, but to be more successful than his father. This is the motivation – not a glitzy, party-driven lifestyle – that drives the film. Family and identity play a greater role for Sam. Of course, dealing drugs does not mesh well with Hasidim lifestyle, and Holy Rollers becomes a film about the unravelling of Sam Gold.

That said, the main problem with this film the abruptness of it. There is a beautiful scene about halfway through when Sam returns home to see what the family thinks of the new stove he’s bought them. They ignore him, his father (Mark Ivanir) nodding and angrily reading Torah, until his mother (Elizabeth Marvel) says “We don’t want it.” As Sam storms out, his sister Ruth (Hallie Kate Eisenberg) tells him that he’s tearing the family apart. The actors each hit their mark, and it is a wonderful scene, except for one thing – this is the first we’ve heard of the Gold family being torn apart. The film hits a switch about halfway through, and Sam goes from well-meaning Jewish son to unrepentant drug dealer and everyone else acts accordingly. What’s missing is what happened between those two stages.