Home
Entertainment
A Beginner’s Guide to Doctor Who: Everything You Need to Know to Jump In with Series 7
Prev Article Next Article 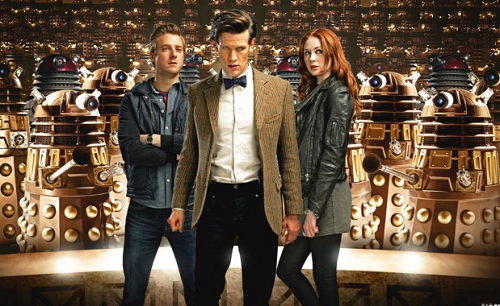 Doctor Who is an international phenomenon. It’s the longest-running genre series in television history (2013 is its 50th anniversary) with a rabid fan base and, since its return in 2005, fairly wide-spread critical acclaim. With such a long history, it would be easy to feel intimidated or unable to jump in, but Doctor Who constantly reinvents itself, providing any number of valid jumping in points. With series seven beginning this Saturday, Sept. 1st on BBC America, now’s as good a time as any to check it out and see what all the buzz is about. For those who still want some backstory, here are some basics about each of the main characters, and make sure to check out the Doctor Who season premiere this Saturday! 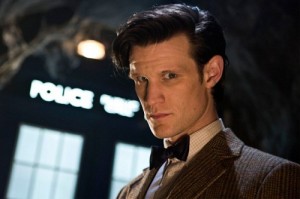 The Madman: The Doctor is a Time Lord, an alien from a planet called Gallifrey whose people were masters of time and space. Time Lords look human, but differ in a few significant ways. They have two hearts, one on each side, they experience time differently, being able to sense which moments are malleable and which are Fixed Points in Time which must not change, lest time unravel, and they regenerate. Regeneration is a process of cheating death that saves them when mortally wounded. Instead of dying, each cell in their body changes, healing the Time Lord, but while the memories of the previous regenerations remain, the personality and body of the earlier regeneration are replaced by a new incarnation.

The Doctor initially hopped in his TARDIS and left Gallifrey because he was bored with the bureaucracy of the Time Lords and eager to see the Universe. After a catastrophic Time War with the Daleks, a genetically modified race bent on Universal conquest and destruction, the Time Lords were Time Locked with the Daleks by the Doctor, essentially trapping both races in a time loop, finally ending the war and the destruction it was wreaking throughout the universe. As the one who pushed the button, so to speak, the Doctor was left outside of the loop, unable to return home or see any of his fellow Time Lords ever again. Having been exiled to Earth for much of his third regeneration, the Doctor has adopted the Earth as the closest thing he has to a new home planet and chooses travelling companions from various points in Earth’s history. 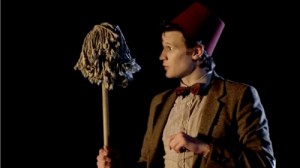 The Doctor has a tendency to become hardened and dangerous, even power mad, when he travels too long by himself. Traveling with Companions, for whom the universe is new and full of wonder, keeps his priorities in order and ego in check. His current Companions are Amy Pond and Rory Williams, as well as River Song, on occasion. At the end of last season, the Doctor faked his death to escape his enemies and is now attempting to lay low. If the past is any indication, this may be something of a struggle for him. 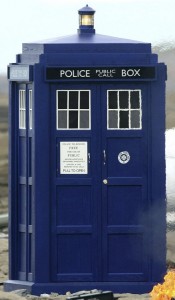 The Blue Box: The TARDIS is the Doctor’s spaceship. TARDIS stands for Time And Relative Dimension In Space. TARDISes are living ships that are grown from coral on Gallifrey meaning that, like the Doctor, the TARDIS is the last of her kind. TARDISes can appear as anything, adapting their appearances to imitate their surroundings when they land, thanks to their Chameleon Circuit. The TARDIS’s Chameleon Circuit broke during the series premiere, however, and its outward appearance has been stuck as a 1960s police box ever since (outside of a brief stint during the Sixth Doctor’s run). The internal appearance of the TARDIS changes periodically and, though the exterior is that of a small rectangular box, she’s famously bigger on the inside. There are any number of rooms inside the TARDIS, including a pool, a library, a wardrobe, and a lab, to name a few. The TARDIS is sentient, though she’s mostly unable to communicate, and she has a strong affinity for her Doctor and his Companions. 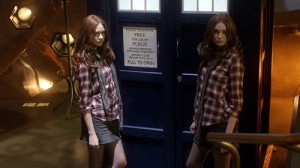 The Legs: Amy Pond met the Doctor as a young child when he crash landed the TARDIS in her back yard. After promising to take her away on an adventure, the Doctor took off, intending to hop five minutes into the future, but accidentally rematerializing 12 years later. Amy, having grown up with the Doctor as her imaginary friend, was understandably upset with him for abandoning her, but after another two year mishap, Amy took off with the Doctor for some adventures through time and space. After coming home to marry Rory, the two continued their travels with the Doctor before returning home to live a more normal life for a while without the Doctor, though he remains a strong, if intermittent, presence in their lives. 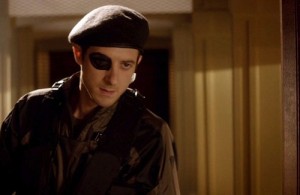 The Nose: Rory Williams is a nurse who meets the Doctor a few times before going off with him and Amy for a few adventures before their wedding. This culminates in his being erased from time, reconstituted as a plastic alien duplicate of himself in Ancient Rome, and then becoming an undying guardian of a magic box (well, it’s a bit more complicated than that) for two thousand years before being remembered back into human existence by Amy. After another season of equally eventful travels, Rory and Amy left the TARDIS to live a quieter life for a while. 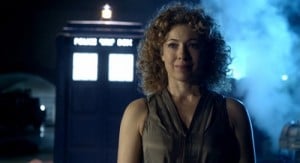 Mrs. Robinson: River Song is a mysterious figure in the Doctor’s life. She is a fellow time traveler who encounters the Doctor in roughly opposite directions in their respective time streams. The first time the Doctor met her, for example, she knew him far better than any Companion yet. She is currently serving a life sentence in Stormcage prison for murder, though she escapes and goes gallivanting off whenever she feels she’s needed. The Doctor knows that he will eventually trust her implicitly, but that hasn’t yet happened. She is able to fly the TARDIS better than the Doctor and she and the Doctor have a playful, flirtatious relationship. Her age and origins are still mostly unknown, though last year we learned…

that she is the daughter of Amy and Rory, Melody Pond, conceived on the TARDIS while mid-flight through the time vortex and exposed to its radiation. This makes her also somewhat a child of the TARDIS, able to regenerate and perhaps explaining her affinity to and proficiency with the TARDIS. She is currently on her final regeneration. Earlier in her regenerations, River was subconsciously conditioned and this conditioning forced her to kill the Doctor at the end of last season. It’s for his murder that she’s in prison. 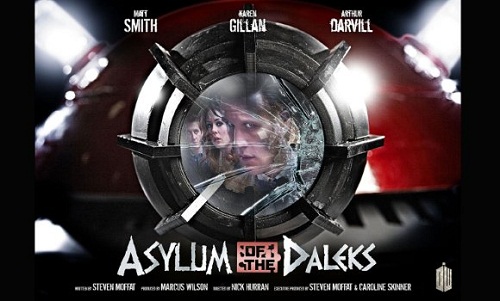 For series seven, Steven Moffat has promised big stories each week. Spectacle and standalones are the name of the game and for those who can’t wait to see some new content, there are 5 mini webisodes, titled “Pond Life”, available online that lead up to tomorrow’s premiere, “Asylum of the Daleks”. Don’t forget to tune in, and then come back to SoS to read a review of the episode and give your thoughts on it as well.