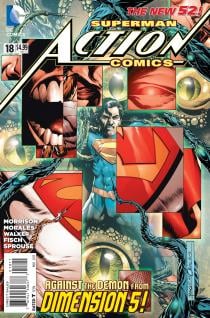 Grant Morrison’s head is brimming and bursting with ideas, so it’s only fitting that his pages follow suit. A vast swelling of content and a multitude of loose ends has led the conclusion of his triumphant run on Action Comics to run over into this extra ‘extension’ issue. The additional pages are entirely validated: Superman struggles through his continued climactic battle with the demon from Dimension-5, as the spectre of death hangs in the air and a flurry of supporting characters confer over the implications of the Man of Steel’s probable demise.

The sky is red, the end is nigh and references to Superman’s previous death at the hands of Doomsday have been aptly drawn in the preceding instalments. As far as exits go, Morrison is determined to leave Superman further emboldened in a blaze of glory. Proceedings become idiosyncratically surreal at the height of jeopardy in the hallucinatory form of lions, lasers and snakes. Rags Morales’ and Brad Walker’s double duty artwork gels together satisfactorily enough to depict an array of environments operating under one narrative umbrella.

It was only fair that Lex Luthor imposed on the battle at the close of #17 as an added incentive for readers to pick up the following issue. His appearance at the climax of what has been termed as a ‘milestone’ arc may serve as a prerequisite, though after being dispensed with in the first few pages his effort seems merely perfunctory. The Legion of Superheroes, the Wanderers and a host of other peripheral characters devour the remaining pages as Morrison’s grandiose, time-spanning arc definitively wraps up. As a result, the issue still feels largely cramped, dense with a cluster of culminations.

And yet, the ethos of Superman dominates amidst the jumble by way of his unwavering ability to persist in the face of a seemingly unstoppable foe. The Man of Steel ups the ante in the final pages, disposing of the new Doomsday incarnation through an impossible feat of strength. Sometimes, that’s all we need to see.

The general sentiment is reinforced in a backup story by Sholly Fisch, with art by Chris Sprouse, in which a boy from the future takes inspiration from Superman and stands up to a group of bullies. The tale is serviceable enough but fairly unimaginative, and one wonders if its omission could have provided further breathing space for the main story.