The world is ending. You only need to put away your phone and look up at the movie screen. Heroes reduce pristine skylines to smoldering rubble with their bare hands or endure gladiatorial tournaments just to get their starving district some damn food.

The world is ending. You only need to look down at your tablet’s streaming service to endure the endless onslaught of the living dead. Scruffy cynics carve out a place among empty storefronts and anthropomorphized sports balls. If they’re lucky, humanity still has a chance to re-route the impending comet on a collision course with Earth (Series premiere on NBC!).

Whatever the cause, the words of Michael Stipe have never seemed more right. Any eschatological piece worth its weight in oil, water, or bullets knows that the cause of that apocalypse — zombies, climate change, Trump for President — is utterly beside the point. Human stories are the appeal, and that’s precisely what led composers Kimberly Henninger and Shawn Parke to score Embers, which plays at the Slamdance Film Festival this week. 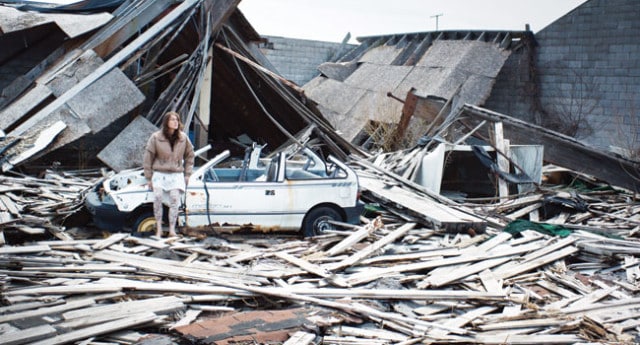 With withering edifices and warped memories, the survivors of Embers can’t recognize who they are nor what disaster they’ve survived, wandering a landscape where metal rebar is more likely to sprout from the ground than any sign of vegetation. Together as Cathedral Sounds, Henninger and Parke’s Portland-based studio, the duo outfit Claire Carré’s minimalist direction with the sounds of a perpetual awakening as it strains to blossom out of desiccated atmospherics. Most importantly, their score is part and parcel of Embers’s particular “end of the world,” neither reveling in the destruction nor running away from it. Rife with familiarity, Embers’s music becomes an intrinsic piece of a humbling story, one of memory and its essential importance to everything we know to be true.

Ahead of Embers closing out Slamdance on Thursday, I spoke with Henninger and Parke about their music, which stands out for just how well it blends in.

Pop Optiq: How did you get into composing music for film?

Shawn Parke: I started getting into producing music, the engineering end of things, in school. With the advent of modern technologies, moving out of tape, that’s when I started composing and remixing. I also worked for a record label in Seattle that folded after a couple years but they decided to go for it and score a film or two. Ultimately, I had always wanted to score film and had done little things for friends before [Embers].

Kimberly Henninger: I grew up with church choirs and then became a punk rocker, not really playing instruments so much as screaming, and probably not very well. Eventually, I realized I could take that genetic memory of music to an emotional point, and then Shawn and I got together and thought why not try?

PO: So where does Embers fit into that timeline?

SP: About 17 years ago, [Embers co-writer and producer] Charles Spano and I lived in Washington state. He was a film student and I was producing hip-hop music. Charles had shot his first student film and asked me to compose what you might call a futuristic retro lounge piece. I later saw on Facebook that he and his partner, [director] Claire Carré, were producing their first feature. I read a synopsis of it and Kim thought we should write a piece of music and see what they think. Charles wrote back to us and said “We love this so much. It reminds us of the score for Mass Effect, our favorite video game. But it’s not what we’re looking for.” So Kim and I cranked down for another week and put together something we felt was more in the vain of what they were looking for. We were still blown away when they asked if we wanted to score Embers a few weeks later.

PO: It sounds like this started with the two of you throwing out ideas before you’d even seen anything.

KH: They sent us a script first, and then we started talking about how we would make music. We just thought, ‘We know the basic idea, we’ll just make what we think that idea would sound like.’ And we were wrong at first [laughs] but they liked our effort. We’ve found that to be true on a couple of occasions, where throwing something out there with a little effort can still go a long way.

PO: How much of the final score was written after you had finally watched the film?

SP: We spent a lot of time finding ways to evoke the feeling of the film before we even saw a frame. We were working with [Claire and Charles] way before picture lock, which was great because it allowed us to get into the guts of the film. Claire had written us about two pages of notes. Descriptive stuff, references to other things she liked parts of. And during pre-production, we wrote maybe two hours of demo material. Some of that ended up influencing what we wrote to picture, but a lot is still in our coffer now.

KH: Once we saw some of the photography, like paint peeling off the walls, we wanted to support that feeling so we started building textural stuff before anything musical. We walked around the neighborhood and got field recordings, like water dripping, and manipulated those to build an atmospheric sound.

PO: That predominance of texture makes sense. Even melodically, so much of your music isn’t overtly character-based. You’re not assigning the Teacher a specific theme or giving Jason Ritter and Iva Gocheva a romantic musical signature; your themes seem rooted in ideas and texture.

SP: What we were trying to do more than anything is not only weave the score into the visual aesthetic but also the inner workings of characters that are fragmented. There are tiny bits and shards of things that sometimes cross over, but there’s always that disintegration factoring into it. Not only is the world disintegrating but the people, their sense of self and their sense of memory have disintegrated. They’re not whole.

PO: And it would be almost disingenuous to assign characters their own themes because of that. How can they have musical identities when they’re missing a literal ones?

KH: We saw the act of forgetting as a character in and of itself. When someone remembers something or thinks “Oh no, I’m losing it” or they don’t realize they’re losing it, we also blended in that theme of forgetting.

PO: You’re doing so much here, but if I were to broadly characterize your sound, it has this intent of tweaking the familiar. A lot of your arrangements depend on instruments and sounds we recognize, only to then warp or rearrange our recognition.

SP: Neither of us are classically trained. Yes, we can write a string piece, but the reason we melded well with what Claire was looking for is because it’s such a joy for us to take incredibly organic sounds and twist them into music. I like to think that underneath the distortions and the warbles and the bubbling and the crackling, our ears subliminally register that there’s a natural sound that’s dying or decaying.

KH: When you first meet the boy that’s violent, there’s a lot of rumbling in the music. Those are all sounds of different animals growling that have been stretched or manipulated so they don’t sound like animals anymore. And yet the feeling of those sounds may be left behind.

PO: There’s also sparseness to the score. Was that a collective idea on your and Claire’s part?

KH: We wrote a lot of textural material and through editing, Claire would put a whole bunch of score down and then cut it back. Some of what we wrote would be thicker, so a lot of times we ended up paring down to a more minimalist level.

SP: There was a moment where the music became almost indecipherable from the picture itself. We’ve thought about releasing the score through a label, but there would have to be something really special to make that work because this is so woven into the fabric of the film.

KH: It was so interesting to see just how much was taken away in post-production. Claire did such an amazing job of taking information down to the bare minimum of what she needed to tell the audience, and sometimes with the score, we were trying to do the same. Really trying to keep it subtle. As composers, we were kind of hoping to keep the conversation about the score to a minimum [laughs]. If we’ve done our job well, the score is the same as a specific color or an acting choice, just woven in.