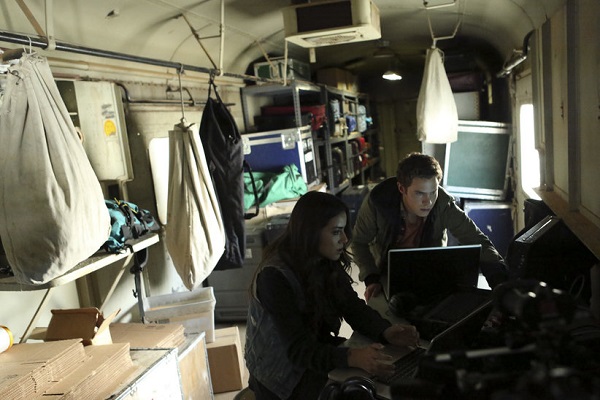 In “T.R.A.C.K.S.”, Coulson and the gang continue their search for Ian Quinn and by extension, the mysterious Clairvoyant. With some of his new tech down en-route through Italy, the team plans a good old fashioned train heist, posing as tourists and following the package to its destination. Along the way, they get separated and the audience sees the mission go wrong from everyone’s point of view- Coulson and Ward get thrown from the train, May discovers who sold out the team to the enemy, and Skye sneaks into Quinn’s hide-out, finding Mike Peterson alive in a hyperbaric chamber.

Now that Agents of SHIELD has finally moved past the mystery of Coulson’s death, the writing is better, freer, and closer to what a comic book fan would expect from a SHIELD TV show. Mike Peterson is revealed as Deathlok, making him the first superhuman character from the Marvel comics to play out his entire origin story within the show. Both May and Ward get plenty of action, leaping off a moving train with the grace of a cat and storming Quinn’s hide-out with guns blazing. Even Stan Lee’s appearance feels appropriate and not as gimmicky as expected.

The format of the episode, having the same events play out from different perspectives, is a great concept as well and allows for some creative storytelling, and there are some nice comedic moments sprinkled throughout. Simmons’ attempts to flesh out her undercover character and improvise father/daughter conversation with Coulson are borderline funny and awkward, but the laugh of the night easily goes to Ward and Coulson trying to use the holographic board. If every episode had a scene that hilarious, Agents of SHIELD would have no problem keeping its audience.

On a last note, the Agents of SHIELD audience has not always been kind to Skye, and after tonight’s cliffhanger, some of them may be hoping for her demise. I sincerely hope that is not the case. Killing off a difficult character is very lazy storytelling and Skye’s death would not serve as a satisfying conclusion to her storyline. Comic books are still viewed in culture as entertainment for boys most of the time and only some of the time for girls, and it is fantastic that Marvel has put a variety of female characters like May, Simmons, and Skye as central figures in the show. Instead of giving up on this troublesome character, as for example The Walking Dead writers did with Lori, I would rather see the Agents of SHIELD writers find Skye’s voice and make the case for her place on the show.