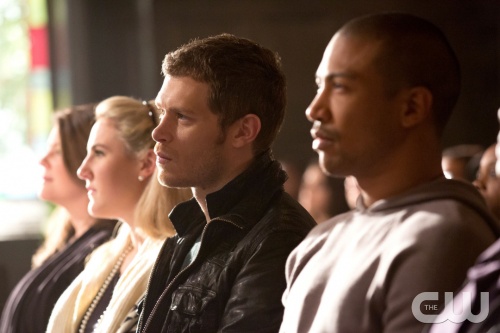 On this week’s The Originals, the French Quarter witches declare war against Klaus and co., Hayley meets her family, Rebekah is duped by yet another man, Elijah faces a difficult choice, and another character falls victim to the brewing war in New Orleans.

With The Vampire Diaries/The Originals vets Michael Narducci and Chris Grismer, along with Head Honcho Julie Plec, helming “Crescent City,” it’s no surprise at all that the episode is so well-done and excellent. So much happens, it’s hard to pinpoint everything that makes it great. Best of all, neither the story nor the emotional development of the characters is jipped–the overall arc of the episode balances everything together quite nicely, giving the audience a delicious treat of an episode.

The episode opens on a high note, with a creepy cool scene of Sophie’s dead niece (not Davina, unfortunately) coming back to life and breaking out of her tomb whilst a group of tourists watch on (and, naturally, immediately start snapping pictures–ha!). This moment’s only the first of many that make this episode stand out amongst its brethren.

Turns out, the witches of The Originals are no pushovers–no surprise, as this show is bursting with strong and powerful characters, especially women–so it’s fun to watch them revolt against the tyrannical vampires that have been oppressing them for so long. And, it’s extra special watching 1,000 vampires fight against a veritable enemy that genuinely terrifies them. (Fair fights are just more fun to watch, you know? And it’s nice to see our heroes/anti-heroes being challenged.)

Klaus’s attempts to wage war against Marcel are almost laughable when compared to the witches’ methods–within roughly 24-hours, the group almost simultaneously manages to break down the city’s peacekeeper (Father Kieran), leave Klaus a warning in the form of a dead witch from the past, and literally raise the dead amongst tourists–seriously, these witches are brilliant and fearsome and so, so fun to watch. Bravo, The Originals.

Oh, and they also manage to kill off one of the show’s weakest characters since the pilot in a brutal gut punch of an ending–truly incredible. With Davina’s death so fresh, Sophie’s demise is especially shocking. Will it unsettle anyone on the show? Not likely. Still–a welcome move on the witches’ part. Now the show can spend extra time on more-deserving characters, like the ever-evolving Camille or even Hayley, who’s become quite the important cast member herself–instead of being the constantly threatened mother or leverage piece, she’s become a genuine member of the crew.

Unfortunately, the show still sees fit to pair Rebekah with another man who inevitably screws her over. Come on, you guys. Can’t she be the empowered one for once? Not the naive original vamp, who dissolves into a lusty teenager whenever an attractive man’s around? Disappointing, especially when she’s held in comparison to the other strong females on the show. Give her more to do that’s unrelated to her various romantic interests, please.

Lastly, Chris Mollere deserves yet more praise for the music in the episode, particularly his usage of Queens of the Stone Ages’s “The Vampyre of Time And Memory” during Sophie’s reunion with her resurrected niece. It’s a lovely scene, mainly because of the song choice.

So, The Originals is in the midst of a pretty great run of episodes–they’re on top of their storytelling game right now, and, as history proves, will undoubtedly stick around there for a while.