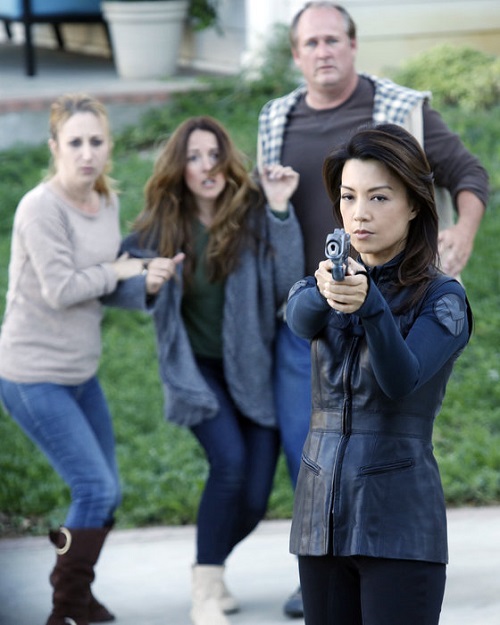 Tonight’s episode “Repairs” has Agent Coulson and his team tracking down a human with supernatural gifts, the first time they have done so since “Girl in the Flower Dress”. Hannah, a safety inspector, has been blamed for a factory explosion that took the lives of four workers. She is shunned by her small town with neighbors throwing eggs at her and calling for her arrest. Coulson’s team whisks her away before an angry mob has the chance to harm her, but she is hardly out of danger as she is followed by something, or someone, that she calls her “demon.”

From the first scene, “Repairs” hits the ground running and gives the tightest pacing of any episode this season. There is plenty of action with the gas station explosion and May’s fight with Tobias, a man torn between two dimensions. This is likely to be a crowd-pleasing episode for those reasons, but it all comes together because of the story. Savvy viewers will realize that Captain America and Iron Man won’t be dropping by Agents of SHIELD. anytime soon, but the show has “Marvel” in its title. The bureaucracy and day-to-day missions of SHIELD. have been firmly established, but the first season has been missing that Marvel touch. Show writers have an opportunity to create new superhuman characters or introduce lesser known Marvel characters to a new audience, but so far, season 1 has been a little too grounded.

Unfortunately, the episode has some problems. Fitz and Simmons try to play a prank on Skye since they never had the chance to play pranks on the freshmen at the Academy. This subplot would have made sense when Skye first joined the team, but after all these missions, she hardly qualifies as green anymore. Besides that, Fitz and Simmons are terrible liars. One would have to question Skye’s intelligence and ability to read people if she actually believed them. Tobias’ motivation is also a bit too simple, but the twist of him protecting Hannah was clever.

The biggest issue with “Repair” is its placement in the season. Episode 10 “The Bridge” will not air until December 10, and unlike “The Well”, “Repairs” is more of a self-contained episode and lacked forward momentum with the season-long story threads. It is well-written and fast-paced, probably one of the best episodes of the show. The writers missed out on what this episode needed, though, which was leaving the audience asking what comes next.