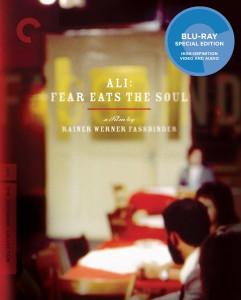 The tragically brief filmmaking career of Rainer Werner Fassbinder consists of great quantities, varying qualities, and an insatiable artistic vigor. With more than 40 completed works in less than 20 years, Fassbinder was a dynamo of creativity. He fluctuated in and out of any number of generic constructs, experimented with a variety of formal devices, and told an eclectic assortment of stories. With so many great films to his credit, it’s hard for any one movie to lay claim as his finest achievement. Ali: Fear Eats the Soul, his second of four films released in 1974, is one that puts up a good fight though. At the very least, it certainly ranks among Fassbinder’s most purely charming and emotionally effectual.

“Happiness is not always fun” declares an opening title, and as Ali progresses from there, the path of this most unlikely of love stories is blemished by a xenophobia and bigotry that transcends decades, cultures, and countries. Emmi (Brigitte Mira, in her first and finest performance for Fassbinder) is an elderly cleaning woman who happens by an immigrant bar. She steps in to get out of the rain and casually orders a drink. The regulars decide to have some fun with this old lady. They tell Ali, one of the foreign laborers who frequent the establishment, to ask her to dance. Ali is played by El Hedi ben Salem, himself a Moroccan whose eight of nine acting credits were all in Fassbinder films and who, at the time, was also in a relationship with the filmmaker. Born in 1935, he would pass away just two years after Ali‘s release. By contrast, the veteran Mira was born in 1910. She lived until 2005. 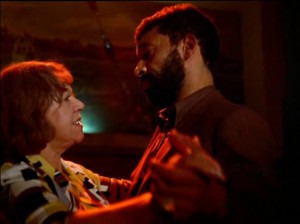 Balled up, shrunken, and shunned, Emmi is as out of place in this bar as Ali will soon be in a conventional domestic setting. Asking her to dance is a simple gesture, even if it has roots in condescension, but it quickly turns into something more. As the two dance, the others mockingly survey the disparity of the duo. But then Ali goes back and sits with Emmi. That wasn’t supposed to happen. Then he pays for her drink. Then he walks her home. This definitely wasn’t supposed to happen.

In this opening sequence, Fassbinder shoots Emmi as a solitary figure or has Emmi and Ali together in one frame and the onlookers together in another. This basic pattern continues throughout the picture. Rare is the arrangement that has Emmi and Ali together with (that is, welcomed or embraced by) others. There is, then, an immediate visualization of the film’s “us versus them” theme of alienating conflict. Ali owes a great deal to the Douglas Sirk masterpiece All That Heaven Allows, but whereas age and class were the barriers in that 1955 classic, here there is age, class, race, nationality, probably religion; to say these two have the odds stacked against them would be quite the understatement.

A neighbor sees Emmi enter her apartment with Ali, and the accusatory condemnation in her circle promptly begins. Of the foreigner, one shocked neighbor proclaims to another that he’s “a black man.” “Real black?” eagerly—but not too eagerly—wonders the other. “Well, not that black, but pretty dark,” says the first.

Emmi reveals that her Nazi father hated foreigners and her husband was Polish. She knows what intolerance is like, but she sees past such prejudices. Rather, she recognizes the instant bond she and Ali tenderly share. They are modest, simple, and nonjudgmental. They are, in their own ways, alone, always working, and marred by sadness. Together they have something special though, something that is beyond the scope of what the gossiping, gawking, busybody neighbors can appreciate. 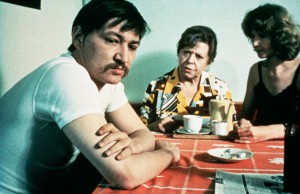 The neighbors aren’t the only ones to contend with. Emmi’s children don’t respond well to her declarations of love toward Ali either, and they respond even worse when they first meet the man himself. Daughter Krista (Irm Hermann, another of Fassbinder’s stock company) and her husband Eugen (Fassbinder) have their own domestic issues. But they can turn a blind eye to their relationship troubles by honing in on what they perceive to be their mother’s. Eugen especially has a deep-seeded hatred of foreign workers, so as far as he’s concerned, there’s one strike against Ali already. Emmi noted earlier that her family only really gets together for special occasions, but despite that implied familial distance, they are all suddenly now very troubled by this new development. The compressed disgust and hate that registers on the faces of Emmi’s children as the camera pans to each in close-up is one of Fassbinder’s most subtle and powerful touches in the film. The stunned silence is broken when son Bruno (Peter Gauhe) throws a tantrum and kicks through the television set (most certainly a reference to All That Heaven Allows).

No matter. Ali and Emmi are in love. There may be some naiveté on her part, or perhaps just innocent optimism, but she refuses to let the scorn get her down. One rainy day, the two marry at the local registry and they’re on their way as man and wife. First stop after the wedding: an Italian restaurant, where Hitler used to eat. 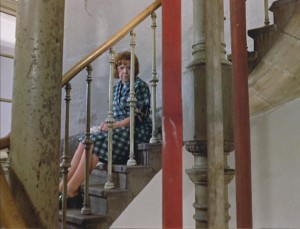 The reactions to the new couple grow increasingly ugly. The nasty and bitter coworkers and neighbors slam all immigrant works as uncivilized, barbaric, dumb, dirty, and money hungry (the women also don’t approve of policemen with long hair). When they’re not being so openly callous, they attempt understatement, telling Emmi euphemistically that there’s “dirt in the house.” Eventually, it gets to the point where they won’t even speak to her or sit next to her at lunch. Though El Hedi ben Salem is generally inexpressive (as he usually is, so it may not be the Ali character), Brigitte Mira has never been better, and she is especially good in these sequences. As she stares isolated in the frame, Fassbinder holds the camera on her weary face to maximum effect, giving us a chance to take in her dejected expressions of sadness, envy, and confusion.

Not everyone is so cruel, however. The landlord’s son, for example, sees nothing indecent about the relationship. But it’s too late. At an outdoor café where Ali and Emmi are almost comically deserted as strangers look on, she ironically professes her wish to be all alone with him, with no one around them. Then she breaks down. The recent treatment has gotten to her. She doesn’t like feeling ostracized.

Not long after this, everyone grows more cordial. But there’s a catch. It’s only the desire for personal gain that changes their tune. When it’s for their own benefit, they don’t have as much trouble with the newlyweds as they used to. The neighbors now like Ali’s muscles, and Emmi’s children no longer think their mother is a whore, especially not when they need something from her. Yet simultaneously, things starting falling apart at home. Emmi overcomes her disheartened state by joining in the gossip when there’s a new target and Ali, disenchanted with some of Emmi’s established ways, seeks the illicit company of a trampy bartender, going to her for couscous and “couscous.”

What’s Fassbinder saying with all this? Is the relationship indeed doomed to begin with, or is it just that it takes more work and sacrifice than either Emmi or Ali are willing to put forth? Ultimately, they reach a degree of understanding. They have tried to deny the societal influence that affects their lives, but by the film’s end, honestly sheds light on their hypocrisy. As in so much of Fasssbinder’s work, nobody here is wholly innocent or entirely wicked.

Todd Haynes, whose Far from Heaven (2002) is another take on All That Heaven Allows and, by extension, Ali, provides an introduction to the movie as one of the bonus features on the Criterion Collection release of the film. He gives a thorough background of Fassbinder’s politics, his career, and he discusses their shared influences and preferences. Among those preferences is an appreciation for light and color. Haynes’ decorative flair in his film is a more obvious mimicry of Sirk’s work, but Fassbinder too imbues Ali with an excellent use of color. It’s less overtly expressive than Haynes or Sirk (or even than in some of his own later films— Lola (1981) most notably), but it’s nonetheless a key part of Ali and a crucial nod to one of Fassbinder’s greatest heroes. As much as anything else, Ali: Fear Eats the Soul is just that: a tribute to a style of filmmaking very much admired by this prolific and provocative German director. But because it is a Fassbinder film, Ali stands more than securely on its own merits, with its own ideology, its own unique form, and its own social intent.

Always inventive, never repetitive, Rainer Werner Fassbinder was among the world’s most fascinating filmmaking figures, responsible for several masterworks. Among them, Ali may be the best of the best.