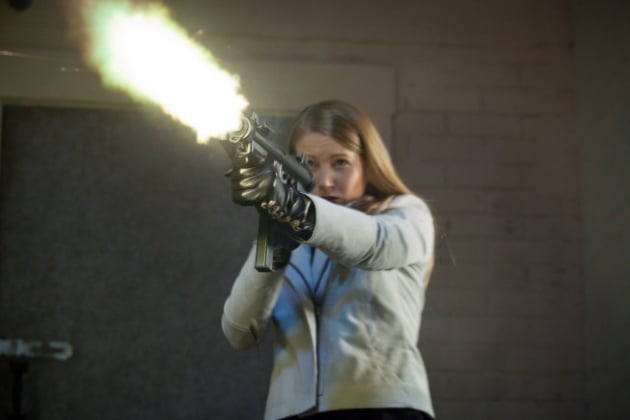 “So close, yet so far away. That must be frustrating…”

In every episode following the pilot, we’ve seen Kennex and Dorian solve case after case with barely a mention of the criminal organization that infiltrated the police department in the show’s premiere. “You Are Here” finally addresses the status of that investigation but taunts viewers by refusing to make any sudden moves.

Unfortunately for those watching eagerly to see the events from the pilot play out in a climactic showdown, the writing chooses to keep focus on a stand-alone case as per the norm, leaving only minutes for the actual Syndicate investigation. The cold open sets up a story with a decent enough premise- the murder of a tech genius leads to the team discovering the creation of self-guided bullets that use the technology most people have integrated into their bodies to track any target and kill by remote. This particular revelation of vulnerability to advanced technological dangers is a much more unsettling concept compared to some of the gadgets and weaponry we’ve seen, especially with the existence of drones and heat-seeking missiles in present day warfare; the idea of a bullet with a system built-in to track individuals is a more likely possibility than any device the show has concocted thus far, building up a plausible scheme that strays far from the safety of drama born from crossing the boundaries set by reality.

A recurring issue that stiffles this episode’s creativity is the show’s knack for casting supporting performers who severely lack vibrant screen presence. Not only is Kira Larsen (Annie Monroe), the victim’s former girlfriend and the next potential target, a relatively uninteresting character, but the actress is less than passable in the role. Her lackluster performance as the main damsel in distress contributes to the procedural aspects feeling like dead weight that holds the show back from going full-steam ahead in the preferable direction of exploring the mysterious complexity of the Syndicate plot.

As soon as it is revealed that Captain Maldonado has been discreetly investigating the attack and interrogating a suspect, their only connection to Syndicate, the entire seasonal arc begins to take shape. Reminding viewers that the Captain still has cause to run an active investigation gives the next few episodes a lot to work with. Kennex’s ex-girlfriend, the head in the evident locker/warehouse and the nefarious intentions of the organization behind it all are genuinely intriguing and should ultimately set up the show’s first season finale if the pieces don’t fall into place before then; but the fact that it has taken this long to simply acknowledge this looming threat again could mean that viewers are in for a few more filler episodes before this particular investigation takes any more significant steps forward.

What the episode lacks in failing to answer questions about Syndicate, it compensates by delivering a few fantastic scenes that utilize the ensemble cast more than in the past. The relationship between Kennex and Detective Paul is engaging and provides the tension typical of egotistical competitors forced to work in close proximity. Since Michael Irby has assumed the role originally expected of Urban’s character, playing the abrassive officer with even less tolerance for androids than Kennex, the disputes often resemble what Kennex and Dorian narrowly avoided in the pilot when the writers decided to soften Kennex to the idea of partnering with a synethetic instead of constantly butting heads. The lighthearted bickering between the two leads is still enjoyable, but contrasted with Kennex and Paul’s displays of indifference, it’s even more apparent that the duo have a relationship that carries a lot of weight. It’s easy to appreciate the baggage Kennex is willing to set aside to work with Dorian when the show acknowledges Kennex’s lack of progress in therapy and deficient social skills in regards to handling situations with Paul.

“You Are Here” is oddly placed within the season’s timeline. By dropping clues about Syndicate, showing moments dealing with Kennex’s recovery from depression, and including Minka Kelly in office banter, the episode seems more fitting among episodes earlier in the series, even as far back as following up directly after the pilot. Waiting to circle back to pick up some scattered story pieces is a curious choice, but it sucessfully reignites interests in the big picture for the season, hinting that greater things are yet to come.