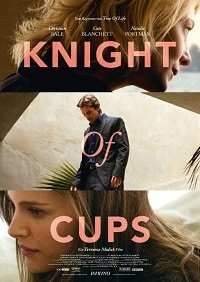 Knight of Cups
Written and Directed by Terrence Malick
USA, 2015

Watching Terrence Malick’s latest film, Knight of Cups, is like being trapped inside of someone else’s narcissism. You keep waiting for the arresting visuals and luxurious landscapes to yield something genuinely meaningful, but it never happens. In fact, it’s a credit to Malick’s considerable skill as a visual auteur that Knight of Cups is even tolerable. This is repetitive, heavy-handed, “First World” navel-gazing at its most self-indulgent. But my god is it beautiful!

Rick (Christian Bale) is a successful Hollywood screenwriter. Like any self-respecting writer, he tries to avoid writing whenever possible. He gallivants around Los Angeles with beautiful girls, lives in a posh apartment with designer (i.e. functionless and ugly) furniture, and seems to have an unlimited supply of cash and cars. Mainly, he just wanders around aimlessly between his aimless relationships, thinking about how miserable all of the money and sex is making him. It’s hard to care about the existential crisis of a man with whom you’d gladly trade places.

We’re treated to a cavalcade of beauties, including Rick’s ex-wife (Cate Blanchett), a married lover (Natalie Portman), a couple of free-spirited bimbos (Imogen Poots and Teresa Palmer), and Antonio Banderas. All the while, Rick is haunted by the voice of his dead father (Brian Dennehy) urging him to find meaning in his life. Like any good simpleton, Rick assumes this meaning can be found at pseudo-spiritual locales, such as the beach or the desert. He likes to stare at airplanes and police helicopters passing overhead, perhaps wishing he could fly away from this tortured existence. Or maybe he just likes staring at shiny things.

Malick clumsily attempts to frame his story using the parable of a young prince sent by his father to find a precious pearl (Get it? The prince is Rick and the pearl is meaning… or something). The prince loses his way and falls into a deep sleep. It’s unclear if this prince routinely awoke next to strippers, but otherwise, he and Rick are practically soulmates. Malick also uses the tarot to ladle on more pseudo-mysticism and sub-divide his film into chapters. There is the obvious Knight of Cups reference, as well as “The Moon,” “The Hermit,” and “Death.” Surprisingly absent are “The Fool” and “The Boring Douchebag.”

Malick has clearly grown bored with traditional narrative. Instead, he floods the screen with stream-of-consciousness visuals to tell his non-linear story. He then adds some overpowering narration in an attempt to explain all the vacant stares and pointless wandering. Young writers and directors are encouraged to, “Show instead of tell.” Malick both shows and tells us everything. The result is an admittedly beautiful film that belabors every obvious theme to the point of self-parody. 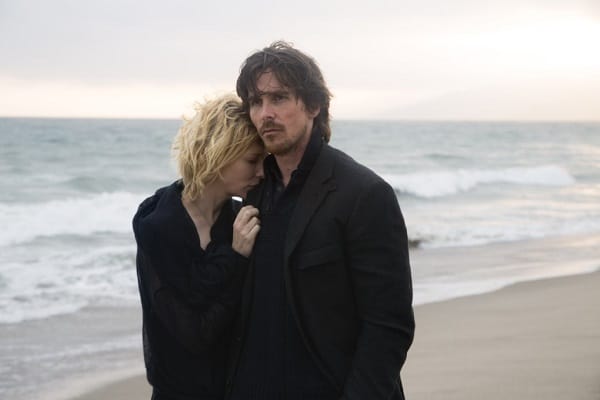 If people really talked like they do in Knight of Cups, our species would have perished eons ago from boredom and self-harming. “You don’t want love… you want a love experience,” some random woman tells Rick as he stares at something shiny. Another character of no consequence advises that, “The world is like a swamp… you have to fly over it.” It almost seems poignant when Cate Blanchett laments, “You wanted me to help you through the dangers of a young man’s life,” but that’s only because Blanchett could make Pig Latin ooze with gravitas. This is the type of movie where every baffling question is answered with another idiotic question. You keep waiting for these self-absorbed cretins to stumble absentmindedly into traffic. Alas, there is no catharsis for anyone here.

What Malick gets right, of course, is the magnificent visual and auditory landscape. The photographic juxtaposition within each scene is immaculate, with Malick and his cinematographer, Emmanuel Lubezki, keeping either their characters or their camera in constant motion. When things occasionally stop, it provides a welcome invitation to absorb every juicy detail that surrounds you. Likewise, the sound design by Joel Dougherty is like a waking dream, with disembodied voices mingling on the periphery and invisible jets throbbing overhead. It’s a truly immersive experience, which makes the inane story all the more frustrating. 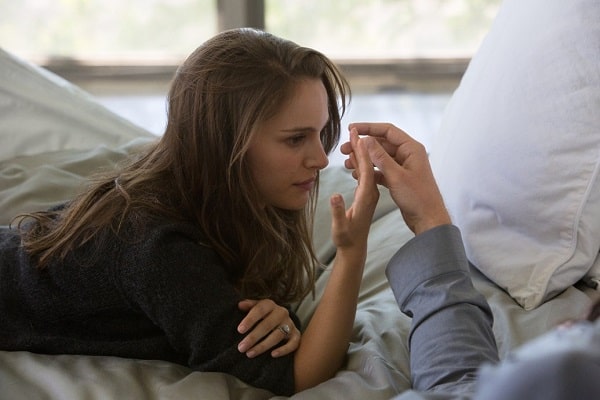 It’s difficult to judge the performances in Knight of Cups because the actors are so adrift in nothingness. Bale does his best to portray the physical manifestation of existential bewilderment, but his only real chance to act comes in the segment entitled “Death,” co-starring an alluring Natalie Portman. This is the only time when you feel like two real human beings are interacting; there is a feeling of history between them that adds resonance to their actions. Otherwise, this a directorial showcase in which the actors are largely collateral damage.

Of course, there is an audience for films like Knight of Cups. It’s filled with visual wonders and countless images that will linger in your mind. It’s also bereft of any discernible emotion or soul; a technical showcase of opulence and emptiness. To paraphrase one of its own characters, “Knight of Cups isn’t for people who want a film… but a film experience.”