At its center, “Night of the Hawk” makes a point about proving its central thesis—the thing that sucks about feelings is you realize how much you can hurt someone or get hurt—but, to its massive credit, it’s also able to extract tons of humor from a network hour in an episode that draws on several different genre influences and tone. Consistency of tone has been something on my mind a lot lately, coming down to the essential question of whether or not that is an aspect to which writing teams should aspire. It certainly seems to be something critics hold in high regard; but “Night of the Hawk” is a great example of how television patchwork can be just as engaging as the familiarity of an established idea of what a show is.

The episode begins a lot like an episode of The X-Files might: Characters who are not a recurring part of the series find themselves face-to-face with strange circumstances in the cold open. And, actually, other scenes in the episode—all involving the hawks (?) that Savage is creating (that’s two different Legends that he’s tried to replicate in two different time periods now)—make good on that supernatural horror element. But like that other series, Legends is smart to identify that the scariest thing going on here has little to do with the supposed monsters and more to do with the nature of humans. This is emphasized most strongly when Jax is taken out by a racist police officer who doesn’t seem to care that someone is dying in the car in front of him; this scene even follows an attack from the hawks and is blatantly more discomforting, which is sharp juxtaposition. There’s a convenient resolution to the issue of the extraterrestrial serum injections, but even so, the genre framing device works well on two levels: providing antagonists that have interesting character designs and making parallels between seemingly unrelated things.

But that framing device is only that. The rest of “Night of the Hawk” is more of a romantic comedy, and not in a derogatory way. Several characters are paired off in situations that come back to that idea of how feelings affect people, and snarky dialog from writers Sarah Nicole James & Cortney Norris help make that journey more fun. Things from Prof. Stein having a delayed realization that this idyllic 1958 is hell for anyone who isn’t white, male and straight to how Sara and Kendra challenge those tensions give the episode tons of character, like Sara asking Stein to get her coffee and reminding him that she’s been trained to kill people literally for days. Sure, a lot of these are moments that are simply impossible to not get behind because of how removed 1958 is from 2016, but it’s still satisfying, for instance, to see the annoyance of one of Savage’s party guests when Ray and Kendra tell her to find her own champagne refill. And it’s funny, which is something that shouldn’t be taken for granted in the Arrowverse. 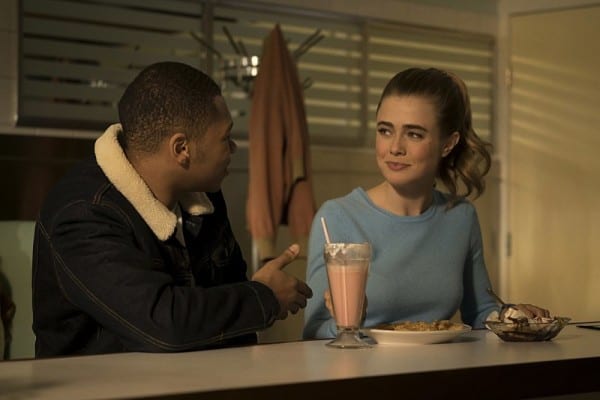 The comedy, though, mostly smooths the edges of scenes that are more interested in character relations, and the three most important ones of “Night of the Hawk” are between Ray and Kendra, Sara and Lindsy, and Jax and Betty. Ray and Kendra’s development is mostly to lead up to the realization that they work better together than separately (Ray calls them partners, which leads to another excellent cut, when the episode moves right to a shot of Snart mourning the loss of his partner in his own way). We get the benefit of seeing this relationship develop for the remainder of the season, which makes the other two pairings even more interesting, since they involve characters who will, presumably, be left behind in 1958. Sara’s interactions with Lindsy are strong not just because of the sexual repression being highlighted but because they also help with Sara’s own development. There’s no mention of Nyssa, but for viewers of Arrow, seeing Sara reach out emotionally to someone else for the first time since coming back from the dead is a major moment, and is appropriately scares her for the reasons she mentions: She doesn’t want to hurt anyone else, and she doesn’t want to be hurt herself. Of course, many romantic relationships are predicated on the willingness to be hurt, since people are opening themselves up to someone in ways unique to those kinds of relationships, but it doesn’t make it any easier for someone like Sara, who is happy to give off the impression that she’s perfectly fine on her own (even though the specific thing she told Snart in last week’s episode about dying was that it felt lonely). Sara and Snart are the Legends characters least governed by their emotions, and with Snart having no romantic opportunities in sight in the near future, it’s important to see Sara warm to Lindsy in a way that isn’t only physical.

Jax and Betty serve a somewhat similar purpose in highlighting a major social concern—racism. But whereas Sara’s reluctance after being kissed has more to do with her, Jax’s reluctance has more to do with the person he’s with. His last moment with Betty is encouraging her to get out of town literally and figuratively. It’s nice to see him get a chance to be with someone else briefly, especially after Ray stole his thunder, but the scenes with Betty work more towards showing how good of a person Jax is at heart, which leads to his understanding of what Snart had to do with Mick. So, both romantic pairings with both non-recurring characters succeed at adding layers to the Legends characters, but in totally different ways, which is more of a challenge than one might think, given that the impulse is just to make a comparison between the two. And it’s these interpersonal relationships that give “Night of the Hawk”—a Timeline of the Week kind of episode on its surface—much more depth of empathy than the series has been able to put together with all the busyness of plotting.