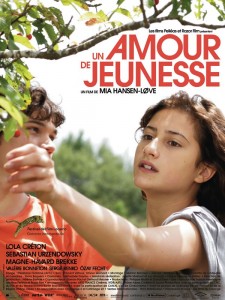 There is a common belief among many people that one’s first love is the one remembered most vividly. It is the one that shapes us the most, that taught us the most, and so on and so forth. The exuberance of finding love for the first time is clearly a pivotal moment in everyone’s lives, in particular if that love is experienced during the formative teenage years. Just how much control does a person have over the intensity with which that first experience shapes them? What might occur if the focus of one’s affections during that pivotal episode in one’s life re-emerges out of the past? What emotions might emerge and how might they influence that individual’s current life? Such is the subject matter which Mia Hansen-Løve delves into with sure-handed grace in her latest feature film, Un amour de jeunesse.

Camille (Lola Créton) and Sullivan (Sebastian Urzendowsky) are two teenagers very much in love. The film’s first scene is them, naked amongst the bed covers in a quiet bedroom, kissing and embracing passionately. Each is still very young with many more experiences left to discover, yet the one thing they seem to know for sure is how much they care for each other. Camille in particular seems virtually depended on her lover to merely get by in the day. She is sad when he is not around, makes silly young love bird statements about what Sullivan means to her and how she might kill herself if he ever left her. Sullivan, while definitely sharing strong feelings for Camille, is not so patient as to handle her incessant need of his undivided attention. Despite this, they nevertheless make a trip down to South America, during which time Camille’s nagging behaviour once again rears its head. The breakup proves inevitable shortly thereafter, much to Camille’s horror. Time elapses, forcing her to reconcile with her feelings and move on, even finding a new lover in her architecture professor at university. However, the day Sullivan shows up again, several removed from the last time they saw each other, proves to be a greater emotional challenge than Camille could have ever foreseen. ‘Director Hansen-Løve proves amazingly adept at providing the movie is a sense of texture unparalleled in many of today’s romantic dramas.’

Mia Hansen-Løve’s project is one where the plot beats will seem all too familiar with what movie goers, whether lovers of the mainstream or the art house, have seen a countless number of times before. A girl and boy are in love, sadly fall out of love, only to re-embrace later on, sending their current emotional commitments into a tailspin. This cursory description of the plot may even dissuade some people from taking a chance on the film, understandably unwilling willing to watch yet another interpretation of a story told many times over. The familiarity factor is but a tiny portion of what amour in really interested in. Director Hansen-Løve proves amazingly adept at providing the movie is a sense of texture unparalleled in many of today’s romantic dramas. Her eye for detail, be it in how to frame characters, or how to present their surroundings, the physical locations where their stories unfold, is more than enough to enrich the experience.

Un amour de jeunesse, at its core, is a film which lives and dies by the atmosphere it creates for each individual scene and how said atmosphere helps drive the character beats, both when times are happy and times are sad. It does in a mature fashion which lends the majority of scenes with a terrific sense of ambiguity. The emotional resonance of any given scene is rarely, if ever, clean cut as purely glorious or heartbreaking. Even in the happiest moments experienced by the characters, Mia Hansen-Løve succeeds in putting a different spin on what is happening. More impressive still is that this beautiful juxtaposition of conflicting emotions is balanced between the lovers, Camille and Sullivan. Camille is frequently quite nagging, to the point where she pushes Sullivan away, yet never fully understands how this can be. She is, in a sense, oblivious to her failings as a girlfriend all the while repeating how much she desperately requires Sullivan in order to feel whole. This initial relationship comes back to haunt her in a powerful way several years after their awkward breakup. At this stage in her life, she is comfortably established with Lorenz (Magne-Hâvard Brekke), a professor who taught and mentored her at university. Their common interest in architecture blossomed into something far deeper and more intimate. Sullivan’s return, however, triggers something within her and before she even knows it, Camille resorts to her old behaviour despite that the 7 or 8 years which have passed which would allow some to suppose she had gone through a period of maturation since then. Such is not the case, and the rekindled fire with Sullivan brings out some of her mid-teen antics yet again. The dichotomy between her secretive affair with her first true love and the life she lives at work (as an architect) and at home with Lorenz is clearly the greatest strength in the film’s second half, demonstrating that however much she might have changed and learned new things in the years that have gone by, something instinctive will continuously drive her so long as she spends time with Sullivan. ‘She (the director) creates a film in which the viewers can simply take in the lush aesthetics without a care for whatever trivial activities the characters are engaged in on screen.’

Director Hansen-Løve envelops the characters in a beautiful world, with deliciously chosen locales and sounds to enhance the experience. She creates a film in which the viewers can simply take in the lush aesthetics without a care for whatever trivial activities the characters are engaged in on screen. Every so often neither Camille or Sullivan are not doing anything of special note, yet the effortless direction and all of the possible advantages that may give, from interesting framing to sound design, ease the viewer into whatever mood a scene is trying to convey. Hansen-Løve’s direction never feels contrived or forced, thus making the end result all the more relaxed. Some scenes are so quiet that one as if they are in the room with the characters, making as little noise as possible. Interestingly enough, the moments without dialogue, when characters are simply living, immerse the most.

Amour functions both as a compelling character piece and as a engaging work of art. There is genuine taste in the direction, taste which brings forth the film’s emotional core in full force. This is by no means a ‘big’ picture. Everything is small, with even the performances during the scenes involving arguments feel reigned in so as to not make things come across as too melodramatic. First loves can be blissful, sweet, eye-opening and bitter, everything Un amour de jeunesse has to offer.