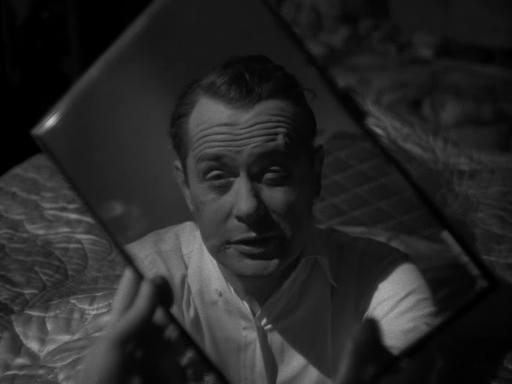 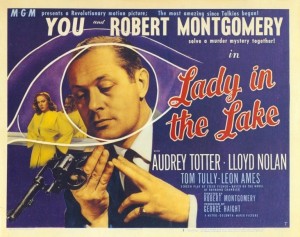 In the history of film noir, only so many entries stands a good chance of taking the crown for ‘most original concept.’  Many efforts of the noir genre function as detective stories (although they should not be confused with police procedurals, which really are a different beast), which themselves became popular through the medium of novels. Some books are authored with use of first person narrative, which is an exciting and limitless tool enabling the writer, and by extension the reader, to discover what goes on the mind of the central character and sometimes side characters. What director and star Robert Montgomery chose to do with the 1947 film Lady in the Lake was borrow the first person narrative tool and translate it to the silver screen. Coincidentally enough, the film is based off a novel from author Raymond Chandler featuring famous private eye Philip Marlowe.

Following a short and somewhat clunky opening scene in which Marlowe (Robert Montgomery) welcomes us to his office and invites the viewer to listen to his tale of a recent case, the camera, notwithstanding a couple brief spells here and there, takes on the visual first person point of view of Philip Marlowe as he walks around, smokes, opens doors and talks to a host of potential suspects and helpful allies in the Lady in the Lake case. After being called into a horror story publisher’s office with what he believes is an offer for one of his written tales, Adrienne Fromsett (Audrey Totter), an important figure at the company, explains that she wants Marlowe to track down the wife of her immediate superior, Mr. Kingsby (Leon Ames), who has gone missing with a man and is even suspected of murder. Marlowe’s cleverness and detecting skills might impress Adrienne, but his brutal honesty and smarmy comments much less so. Despite what reservations she has, Marlowe is good at what he does, and so off he goes for the hunt, at first without the Mr. Kingsby’s knowledge. What ensures is a traditional tale of double-crosses, surprising reveals and depressing characters.

The film’s posters proudly proclaim that ‘You and Robert Montgomery solve a murder mystery together!’, which is only partly true. There is no doubt that the audience will spend every moment of the running time with private dick Marlowe. When he gets too nosy for someone’s comfort and receives a fist to the face as a reward for his efforts, so do we, with the screen slowly fading to black. When he enjoys a cigarette, so do we, as a thick line of smoke rises from the bottom to the top of the frame. These are but the visual cues by which ‘You and Robert Montgomery solve a murder mystery together!’ It is in essence the most literal way a filmmaker can effectively bring to a movie what novels succeed at when narration is done in the first person. On that level, Lady in the Lake is a decent success. Certain camera angles are neatly prepared to reveal the actor Montgomery when the reflection of Marlowe should appear in a mirror. Other times the camera will rise up or slope down if the character is getting to his feet or falling. There is even one rather fun sequence involving a car chase in which Marlowe, and consequently the viewer, is driving his car and either looking back over his seat or in the rear view mirror to glance at his pursuer.
On a purely visual level, the technique functions adequately and on occasion provides for some admittedly clever moments. From a character standpoint and, more importantly, from a story development level, since we are promised to solve the murder with Marlowe, the technique is less successful. Not poor, just less successful. Encountering the possible suspects from the first person is fun and, provided the location where the meeting occurs is creepy and dark, can be quite thrilling. Nonetheless, it is still Marlowe being Marlowe, that is, brash, impolite, nosy as he should be, etc. Those are not detriments, mind you. The heroes in film noir pictures are often really anti-heroes with dark streaks and less than exemplary qualities. Montgomery has his character follow the suspects and clues just as any detective would, oftentimes disobeying whatever rules were provided by his multiple employers. The viewer has no say in any decision making whenever Marlowe figuratively makes a right turn as opposed to a left one. Granted, what possible strategy could have been employed for the audience to actively make any decisions? None, really, unless one wants an interactive DVD movie game of some sort. So what are the issues anyhow? To be honest: what it is the point? Lady in the Lake has a decent story, with some intriguing characters, nothing especially memorable although everything is perfectly serviceable, but it badly wants to sell this notion of the first person point of view, which in the end adds nothing to the narrative. It is unique, even quite well handled aesthetically in some instances, yet it is not difficult to think of several other noirs that employ what shall simply be described as a more ‘traditional’ camera and work wonders with it, creating images that truly remain ingrained in the viewer’s retina. It is comparable to the influx of 3D movie experiences in multiplexes these days. Sometimes it looks good. Sometimes it is utilized in the best possible way. In the end, what in heaven’s name did it do to enhance the movie? Not much, more often than not. Just like 3D can even hamper certain watching experiences, the first person camera hampers Lady in the Lake at times, with needless sequences of Marlowe walking down hallways, turning around after saying goodbye to someone then walk back the other way, open a door and walk outside. We get it, first person narrative… Perhaps an interesting tool would have been if the film slowed down at times and had Marlowe think aloud about the clues and facts, thus inviting the viewer to think like a detective along with the protagonist, but that never really happens. 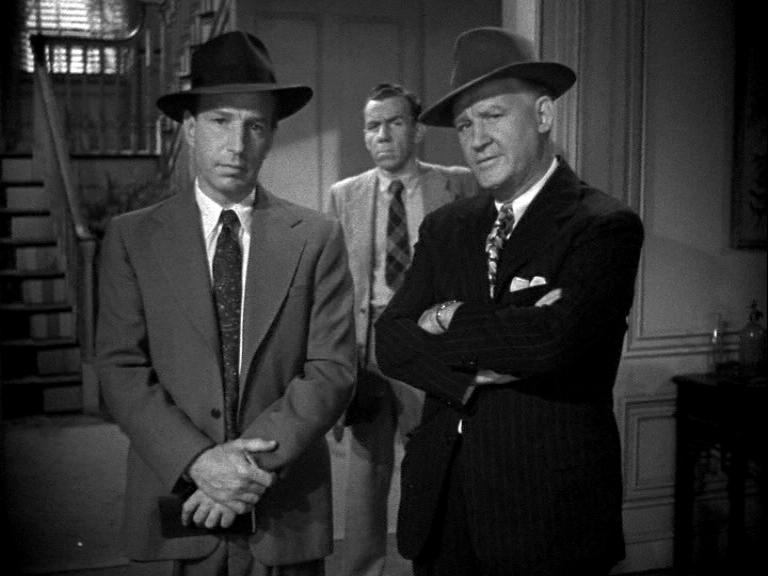 Not much needs to be said about the plot. As  briefly touched upon in the above paragraph, it is fine, but nothing to shout about. Some people are lying, there are a couple of femme fatales involved, crooked cops with ulterior motives, everything is rather straightforward, at least as straightforward as film noir plots go. What do stand out are some of the performances, especially from Audrey Totter and Leon Ames. With the latter, we get a middle-aged man desperate to right the wrongs that may have caused the rupture with his missing wife. He is a classy human being going through some rough times and is willing to get his hands dirty and Ames is very good at breathing those qualities. Audrey Totter is a delight as the positively sexy but often ill-tempered Adrienne Fromsett. Her attitude hints at why she is currently single, an attitude which keeps Marlowe at a certain emotional distance from her, yet she clings to him nonetheless, and him to her in many ways. Is she directing Marlowe in the case for some less than honest ulterior motives or does she genuinely want the private eye’s safe return? The truth shall remain a secret for those who are new to the film, but suffice to say that Totter radiates on screen, despite or perhaps because of her complicated character. Lost amidst all the technical merits and supporting cast members is Montgomery himself, who just needs to consistently deliver lines convincingly like a film noir detective should, but there is a lack of conviction in the performance at times. His lines have that necessary verve near the end of the picture, but the delivery is pretty dry at times throughout the first hour.

Lady in the Lake, while uneven in certain respects, undoubtedly has its moments and as a unique artifact of a much beloved movie genre among film enthusiasts, it earns a recommendation.