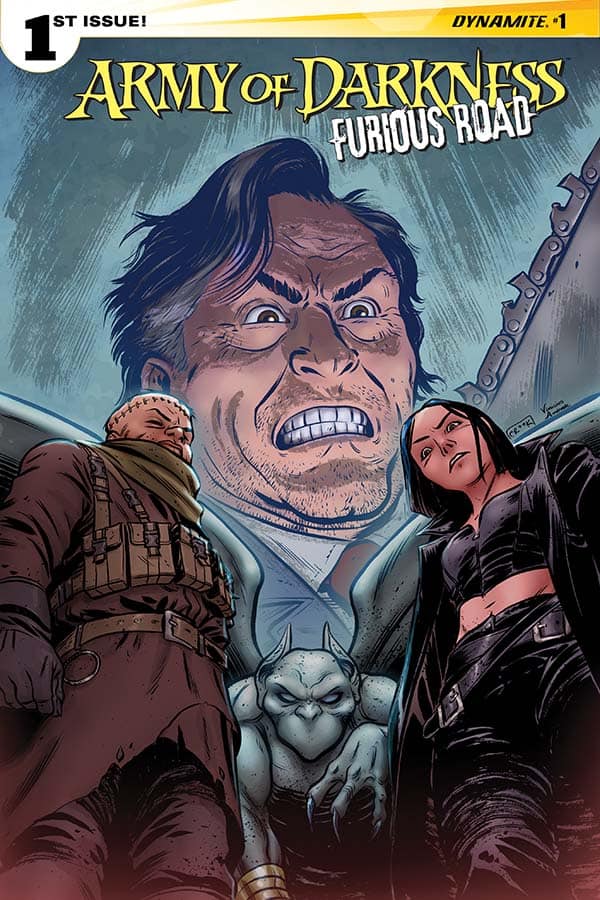 Part of what makes comics great and sometimes terrible as a medium is the freedom to do whatever you want. Take the Army of Darkness comics, for example. Not beholden to the new canon established by Ash vs. The Evil Dead, the comics have had the freedom to expand the story of Ash Williams in interesting ways. Some work great, like the first two arcs “Ashes 2 Ashes” and “Shop Till You Drop Dead” picking up where the Army of Darkness film left off. Some… not so great.

Luckily, the latest arc, “Furious Road” falls more into the good camp with its first issue, but probably because we haven’t really seen too much of how Nancy Collins writes Ash.

The first new Army of Darkness comic in a year, the story takes place “twenty years from whenever ‘now’ is” and is happening in a post-apocalyptic Detroit overrun by Deadites. A group of survivors are heading on a road trip out to Dearborn to find the Necronomicon, dealing with the horrific undead demons on the way. Of course, demons cannot compare to the sheer stubbornness that is a grizzled Ashley J. Williams living out of an S-Mart.

As previously mentioned, the first issue doesn’t really deal a lot with Ash. He first shows up on page 18. Instead, we get to meet the survivors of this new post-apocalypse that has tinges of the original ending of Army of Darkness mixed with Mad Max. We have vampire hunters Eva and Michael, two characters who had previously been in Army of Darkness comics, along with punk sorceress Hekuba, gargoyle Martel, werewolf Gnarly, and two characters known as The Rev and Sister Ronnie. While backstories haven’t really come into play yet since most of the comic is them fighting off Deadites, Collins and Baal work together to establish them as distinctive characters in look and personality. It’ll be interesting to see where the story takes them after such an explosive introduction, both literally and figuratively. 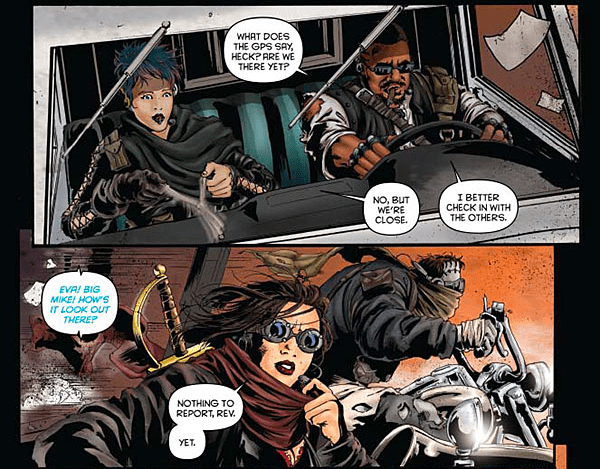 What little we see of Ash, he comes across more as a grumpy old man. Well, grumpy scruffy man, at least. Baal doesn’t really age Ash too much, even though he’d probably be in his 50s at this point, at least. Compared to the way Ramón Pérez drew Old Man Barton in All-New Hawkeye, it’s a bit disappointing to see Ash just look like he hasn’t shaved in a few days. However, Collins does do a good job of writing Ash as a smarmy hothead whose mouth writes checks he can’t cash. Whether that’s just a front or his entire character remains to be seen.

Besides the writing, the team of Kewber and Schimerys Baal work well together on art. The action and pacing is absolutely dynamic and the colors bring a good balance of post-apocalyptic dinginess without losing out on vibrancy. Hekuba’s spell casting in particular brings a wonderful sense of atmosphere with an electric purplish-pink that matches her hair.

As an introduction, Army of Darkness: Furious Road sets out to do its job without getting too bogged down in the details. Collins and Baal dive right into the action, setting up this interesting team of characters on a mission to find the Necronomicon and to fight off Deadites while doing so. By choosing to wait on bringing Ash in, it gives more of an idea of what the universe is like outside of him while giving the other characters a chance to shine. The only question is will it remain that way once everyone’s favorite screwhead Ash becomes a major player in the next issue.