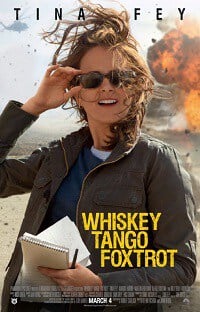 War may be hell, but it also makes great television. For the journalists and photographers tasked with capturing the bloodshed, that hell is both intoxicating and poisonous. The new war-comedy, Whisky Tango Foxtrot, understands that what doesn’t kill a journalist only makes them more reckless. Directors Glenn Ficarra and John Requa sanitize the violence and politics of the U.S. War in Afghanistan in favor of Tina Fey’s wit and humanity. The result is a smart comedy that packs plenty of bark but not much bite.

In 2003, New York journalist Kim Barker (Fey) abandons her cozy desk job in favor of the dangerous streets of Kabul, Afghanistan. All she has is an orange backpack (aka ‘sniper bait’) and a desire to do something meaningful with her life. She immerses herself in the “Kabubble”; an intoxicating cycle of booze-soaked parties, sex-starved soldiers, and war-fueled adrenaline. On her first embed with the Marines, Kim defies the pleas of her Afghan ‘fixer’ Fahim (Christopher Abbott) and the orders of her commanding officer (Billy Bob Thornton) by leaping out of the jeep and into the fire fight. From that moment forward, she’s hooked.

Kim bonds with a tightknit pool of war correspondents, including the stunning reporter Tanya Vanderpoel (Margot Robbie) and a rakish photojournalist named Iain (Martin Freeman). Tanya is full of useful warnings about civilians and soldiers, including the concept of ‘Kabul cute,’ by which, “Sixes in America become tens in Kabul.” She also warns Kim not to sleep with Iain, whose good looks and sexy Scottish brogue serve only to mask his complete self-absorption. Naturally, Kim wants him immediately. These are the types of friendships you can only find in combat and crisis; the threat of sudden death is a great social lubricant. 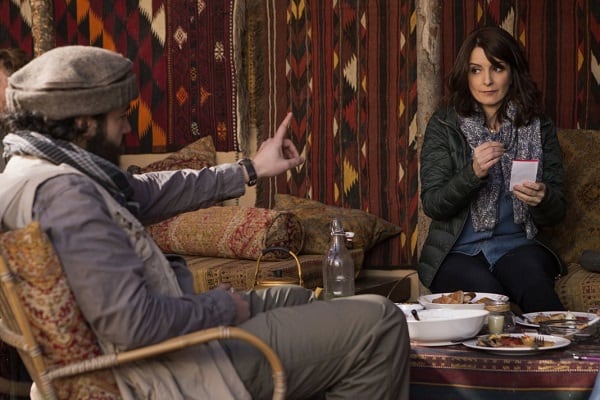 To their credit, co-directors Ficarra and Requa understand the story they’re telling. Based upon the (superiorly-titled) novel by Barker, The Taliban Shuffle, Whiskey Tango Foxtrot is a film about outsiders finding their place on the inside. It’s not a war film in the classic sense, as there’s very little combat and even less genuine peril. This is a movie about late-night bonding and complicated relationship dynamics; like a college dormitory, only with mortar fire. Kim discovers the confidence to create the illusion of control in her life. That her life is so chaotic only makes her addiction to this newfound confidence all the more powerful.

Robert Carlock’s script is subtly observant and packed with plenty of zingers; think Mamet without all the verbiage. It’s also got just the right amount of cynicism to make it resonate without wallowing. A geeked-up Marine gleefully observes that, “Hearts and minds are the two best places to shoot somebody” in one scene, while a decimated Kim lingers over the melted crayons in a bombed-out schoolhouse in the next scene. Carlock manages this tricky balancing act by confronting the darkness on a purely superficial level. This approach perfectly suits Fey, who can switch between flighty and feisty with the bat of her luxurious eyelashes.

Still, despite its humor and likeability, Whiskey Tango Foxtrot feels uncomfortably slight. When the soon-to-be Attorney General of Afghanistan (Alfred Molina) offers to be Kim’s “special friend,” it feels more like a set-up for sitcom hijinks rather than a stinging indictment of institutionalized sexism; call it good-natured sexual harassment. While it’s refreshing that the filmmakers refuse to demonize any ethnic or religious affiliations, there is also a bit too much ‘whitewashing’ in the casting. Christopher Abbott (coming off his starring turn in the wonderful James White) works well as Kim’s guide, but Molina is distractingly miscast as the Afghan bureaucrat. Why these roles couldn’t be played by skilled actors of Middle East descent remains, as always, a complete mystery. 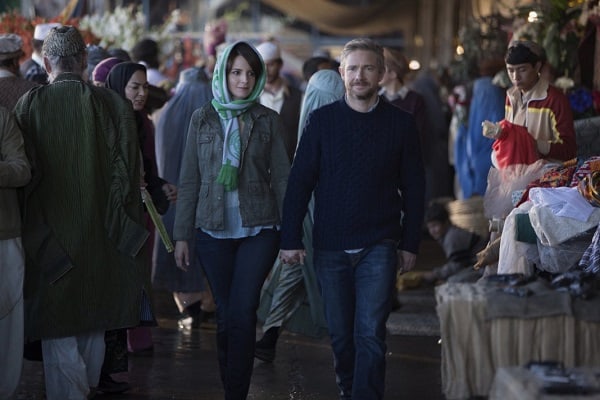 Despite the lack of diversity in the cast, all eyes will deservedly be on Fey. This is her showcase (Fey’s own production company got the ball rolling), and she carries the entire affair with unflinching confidence. It’s the type of role that could catapult Fey into more serious roles, just as Jim Carrey used The Truman Show to similar effect in the ‘90s. Freeman has a delicious time ruffling feathers as the motor-mouthed Scot, developing an easy chemistry with Fey almost immediately. And, of course, it’s always nice to see Billy Bob Thornton in anything. No one delivers a non sequitur like Thornton.

Whiskey Tango Foxtrot is smart, funny, and does an adequate job projecting the illusion of substance. Everything certainly looks great, with the directors transforming Albuquerque, New Mexico into a surprisingly-convincing facsimile of Kabul. Mostly, it’s just a thoughtful, funny reflection of its gifted star, Tina Fey. There’s no real insight into the war ‘experience,’ but there is plenty of juicy character stuff to keep things entertaining throughout. Well worth embedding yourself in the theater for two hours.