Every year exceptional games come out and there’s always too many to keep them all in the public eye, so I’m dedicating a series of articles to illuminate great games forgotten in time.

In 2006 we were treated to a masterpiece that over a decade worth of development went into. Prey, by Human Head Studios under contract for 3D Realms, was a groundbreaking first person shooter for its time as it was the first in its genre to implement physics tricks like portals and shifting gravity. I’ve got to hand it to Valve for noticing the potential in making a puzzle game out of the portal mechanics but it was Prey that did it first and did it well, which is rare for a game experimenting with new ideas. Prey went gold after selling over a million copies in two months and critics loved it with scores like 9/10 from IGN and 9.5/10 from Game Informer. People liked this game, for good reason, but that didn’t stop it from fading into obscurity where it’s only remembered when it randomly pops up in the minds of old FPS players. 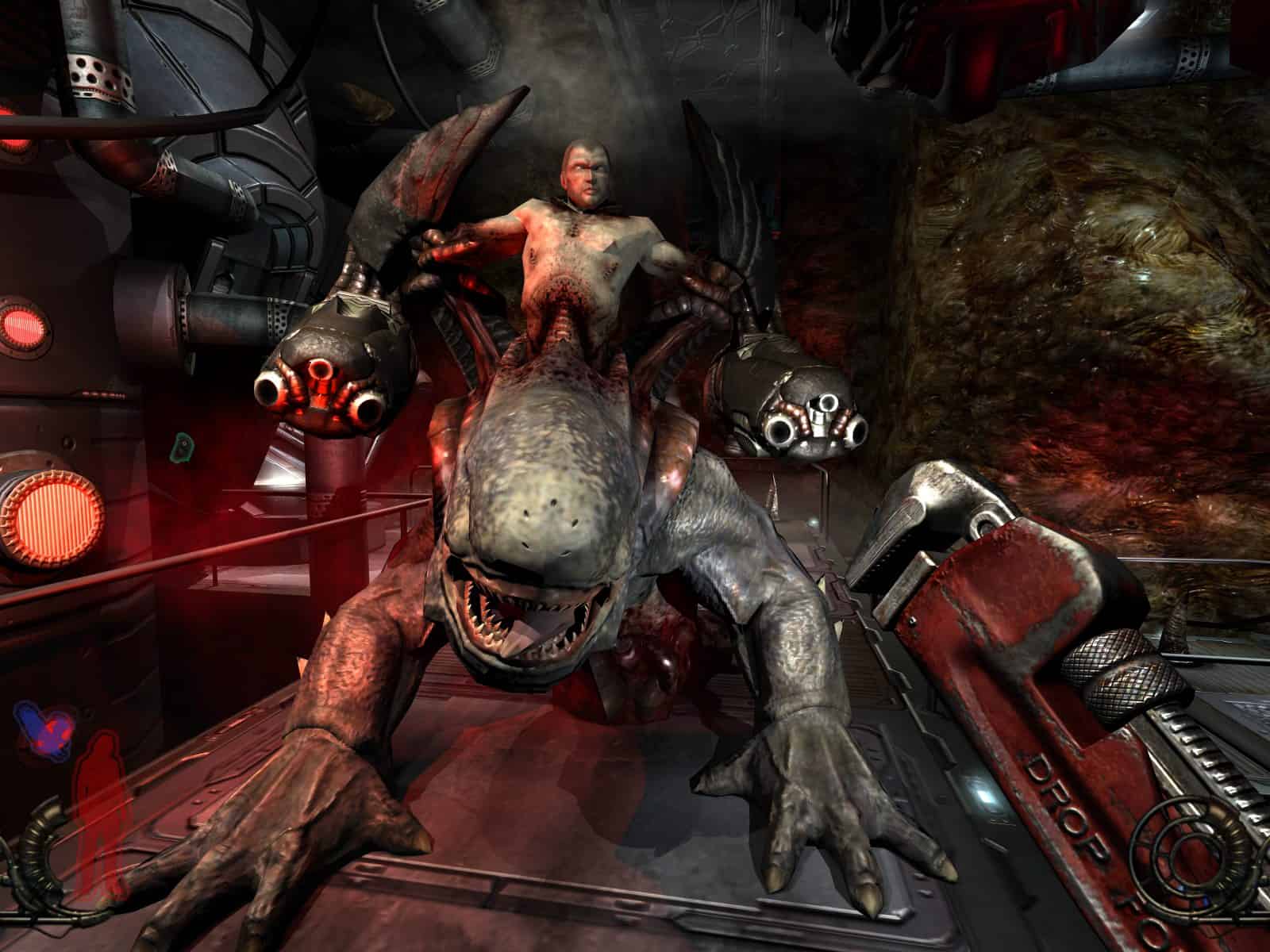 You take control of Domasi “Tommy” Tawodi, a Cherokee mechanic and former USA soldier who desperately wants to leave the Native American reservation where he’s staying but his girlfriend, Jen, doesn’t want to leave her people and his grandfather, Enisi, wants him to embrace his heritage. Tommy doesn’t believe in his grandfather’s superstitions and wants to go make a name for himself so the game’s all about him coming to terms with his family, his emotions, and his growth as a person… Oh and aliens, they get abducted by aliens. This is where the game really shines to me because of the game’s distinct feel and the portrayal of the aliens: it brings the gritty and dirty feel that 3D Realms does so well and brings it to, what I think is the perfect setting for it, an alien abduction story. The fear you feel as one of countless people being harvested and taken for experimentation is perfectly emphasized with an atmosphere so unsightly you almost feel yourself smelling it. Tommy sees his grandfather get brutally murdered, has a near-death experience, and finds himself in The Land of The Ancients which is a mystical Cherokee place his spirit goes to to meet his grandfather’s spirit and learn cool spirit abilities like astral projection and spirit arrows. The contrast between the mother ship (known as The Sphere) and The Land of The Ancients is grand in its emphasis as The Land of The Ancients is depicted as this beautiful, magical place built into the side of crimson mountains with views of blue skies sprinkled with majestic clouds, and The Sphere is depicted as industry at it’s most pungent with bloody, breathing walls and grotesque monsters trying to kill you. The visual design in Prey is a touch of brilliance.

Prey took traditional FPS mechanics and added elements that turned it from what you’re used to to something mind-boggling. There are these gravity pathways that you stick to as they lead up walls and on the ceiling so it’s interesting when you’re trying to shoot at some enemy that’s above you on the floor. The game goes to many lengths to try to push your perceptions of physics, for example, there’s a part where you see a small planet in a box then you go through a portal that takes you onto the tiny planet and enemies outside the box appear like giants. There’s plenty of little quirks and unique patches of gameplay that make the whole game fun and interesting all the way through. 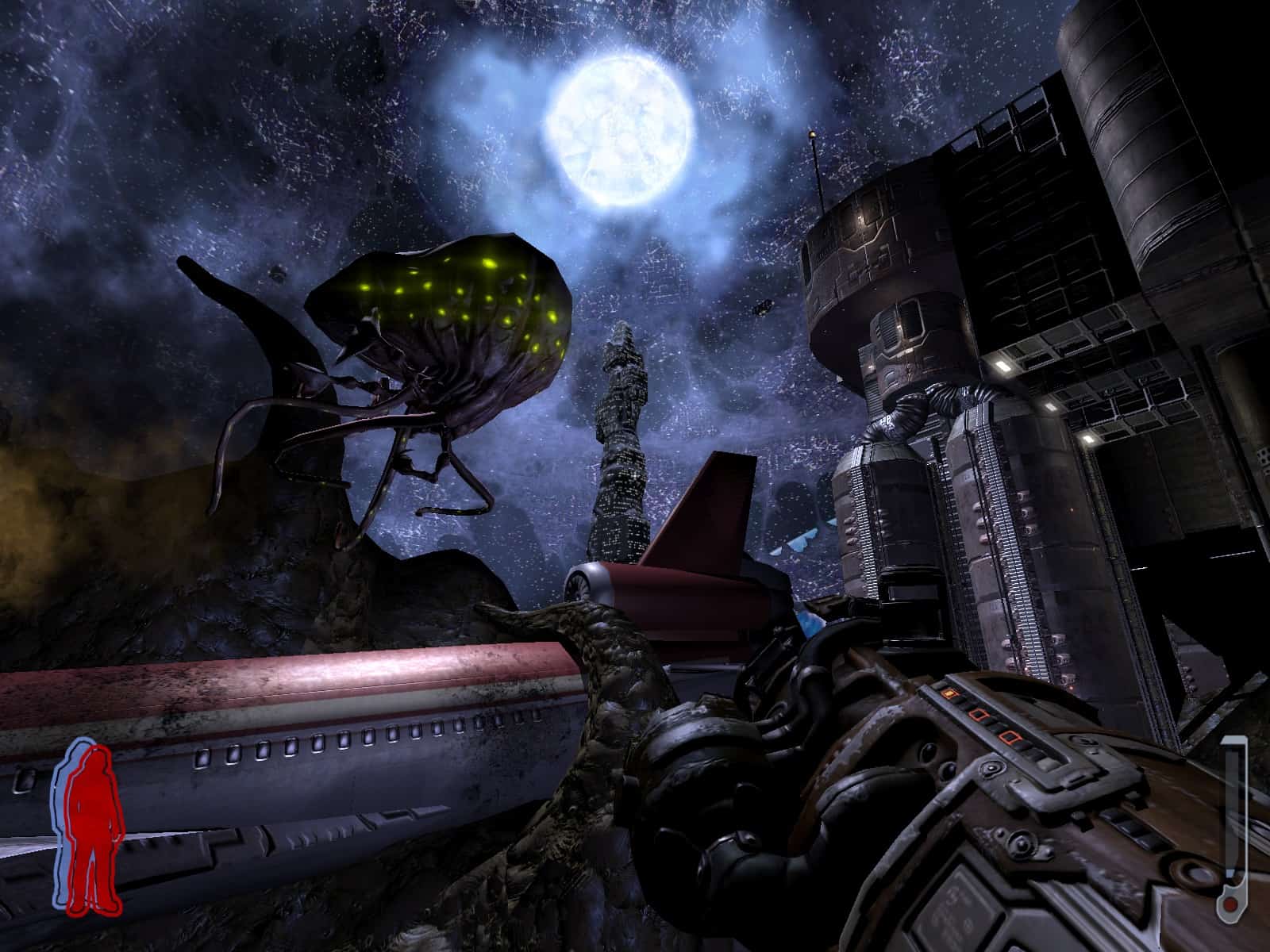 Prey was born in the perfect time for gaming where people were getting bored with how things were, so experimentation was at a high. It’s rare to have a game play with so many new ideas and still create a quality experience with a fun and interesting storyline. It was back in the golden days when stories were always incredibly over the top but it’s not so old that everything is cheesy, so it can tell a crazy story with out-of-this-world plot developments and still be engaging enough for you to get emotionally interested. There are a few things that are a bit dated though: it’s a relatively early Xbox 360 title so the graphics are bit old, but I’ll argue that they still stand up today because the level of detail put into the environments, the enemies, and the guns (pretty much what you’re looking at most of the time) is quite polished. It’s just the character models, some animations, and explosion effects that makes you think “that’s right, this is an old game” (also, I found myself reaching for a sprint button that didn’t exist, and the voice acting is a bit average when compared to today’s standards).

Prey was so good that there was even a sequel under way that was going to be released in 2012, but was instead cancelled because it didn’t meet the developers quality standards. Guess it’s better to cancel the game than screw over the franchise with a sub-par game, but what resulted was that people just stopped talking about Prey and it faded away (also, Prey 2 looked awesome. Who doesn’t want to play an open world FPS where you play as a bounty hunter on some alien planet? I was very guttered when I found out it was cancelled.). Since its inception I’ve seen a lot of games use mechanics and ideas that Prey pioneered, but to this day I haven’t played a game that did them better. Prey balanced everything beautifully and Human Head Studios kept their eye on keeping the game fun. More people need to play this game because I want to the developers to see that people are still interested in the franchise and maybe, just maybe, they’ll rethink the whole sequel thing.