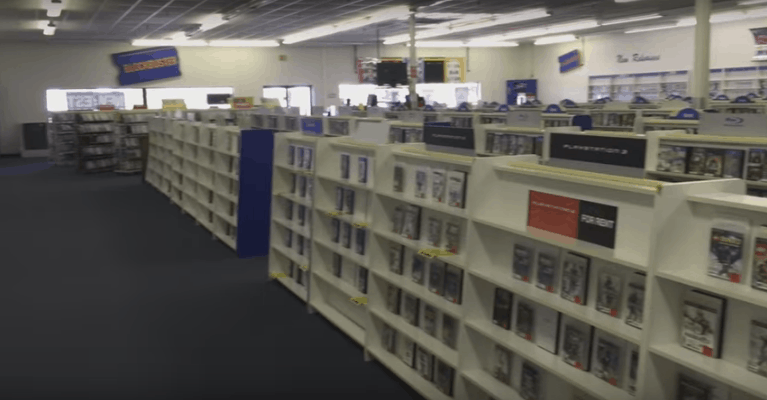 I worked in a video store for ten years, so the demise of the video rental industry is and remains a sore spot for me. I was a regular customer in the years before I took up employment at Avenue Video, and some of the people I met there that eventually became my co-workers are still among my closest friends. Like so many people of my generation, the video store is where I became a cinephile. So many of the movies that were formative experiences for me as a movie geek are ones I first brought home in those old plastic VHS cases where you have to squeeze them and shake the movie out, and later in DVD cases locked with red or yellow plastic tags. As with so many important memories, I can still even recall the smell of most big rental stores, that combination of plastic and carpet cleaner that sticks so vividly in the memory.

You’d think that places like these are completely gone, but in the same way that my old store hung on for a few extra years, there are still a couple of big box stores in parts of the US that have managed to stay open. A new video from Chris Stuckmann‘s Retro Rewind series takes viewers to a few of them, including one of the United States’ last remaining Blockbuster Video locations. Yes, there is still a Blockbuster in operation somewhere, and just looking at it is a trip. The screens playing loops of trailers, the widely spaced shelves, the wire-frame racks, all of it washed out by banks of fluorescent bulbs, it’s all still there. And Blockbuster isn’t the only one. Hollywood Video, a chain we never got here in Canada, still has some locations. One other US chain, Family Video, also has some locations left. One of them even has a takeout pizza place inside! How awesome is that.

How these places have stayed in business is something I can only speculate on. Maybe it’s a combination of a strong, loyal customer base and being based in a location with lower internet speeds than other places, making streaming a less viable option. But however it is that they’re still around, watching Stuckmann wander the aisles of these monuments to a bygone age is probably going to get you all misty and sentimental, if you’re like me. Places like these seem less like relics and more like temples to folks like us. These were important places, places where we became who we are today. Call it sentimental if you will, but for people of my generation and group, these kinds of stores were integral parts of our filmic upbringing, and the fact that future generations won’t get to share in that experience is a sad thing indeed.

Check out the video below, and let us know in the comments about your video store memories.