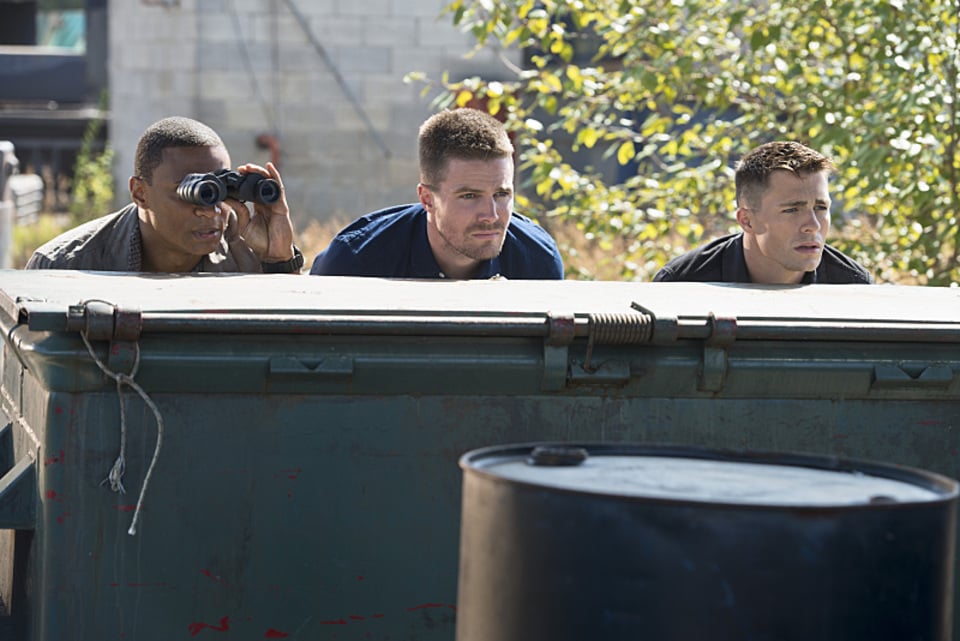 Remember when Arrow was just the story of a guy getting revenge on the people who fucked over his less-than-honorable father? Arrow‘s grown (and grown up) quite a bit since the first season of the show, a rapid expansion of settings, characters, and people who know that Oliver Queen is Arrow (seriously: remember how many people found out last season?). And every now and then, Arrow stumbles a bit under the weight of keeping so many people and plot lines up and running at any given time in Starling City – unfortunately, “Corto Maltese” is one of those hours, an entertaining episode held back by the sheer amount of material it’s trying to cram in (and in some cases, straight rush through) as it begins to establish the larger stories of what appears to be another wildly ambitious season of Arrow.

There’s plenty of great material to be found in “Corto Maltese”, even outside the wonderful action sequences: individual scenes like Oliver and Thea’s lunch or Laurel and Oliver’s conversation later on are great, character-building scenes that strengthen two of the show’s weakest characters, women whose immaturity and predictable weaknesses became all-too-obvious when fantastic, complex characters like Sara Lance or The Huntress made their way into Starling City. Since it appears season three is bringing both of these people into the fold of Team Arrow (or at the very least, its proximity), “Corto Maltese” undertakes a big task trying to bridge the gap between “weak, dependent girls” to “strong, independent and ass-kicking women” in the period of an hour – and in the process of trying to do both, all while building out stories with Oliver, Diggle, and Felicity for the season as a whole, just doesn’t work.

Maybe it’s my longtime dread of seeing Laurel’s character on-screen, but a lot of Laurel’s dialogue in the episode feels stilted, written a little too matter-of-factly to be emotionally resonant (“I have this fire that booze and pills can’t put out!” she screams to Oliver after a failed vigilante attempt leaves her bloodied and bruised). At the very least, it’s nice to see Arrow pushing Laurel along on an accelerated timeline, something I would’ve loved to have seen when she was boozing and pilling away during last season’s plunge into Laurel’s “dark side”. Plus, it brings her into contact with Ted Grant (while she’s looking for Tom Bronson, two different identities of the Wildcat character), which only builds out the world further with more interesting DC characters to keep our eyes on as Arrow expands into a show about Team Arrow and Star City (an attitude reflected in the new opening sequence, which mentions the others around Arrow helping him “save his city”).

(side note: I’m setting the over/under for Laurel sleeping with Ted at three episodes. It’s happening folks, and we alllll know it’s coming.)

And Thea’s material is just disappointing in that there isn’t enough of it. All we get is one scene of Thea getting wax poured on her hand, and a brief sword fight with Malcolm, then – she’s on her way back to Starling City, to do whatever she’s going to do while her brother continues to not tell her he’s a superhero, whose biggest archenemy is the biological father who trained her (see how complex Arrow‘s narrative is getting?). Instead, the episode spends a lot of time on an ARGUS story that’s too obscure and foggy to really be entertaining, instead of using the titular location to explore the spiritual and physical journey that transformed Thea’s life (and haircut).

Everything in “Corto Maltese” happens so damn fast: Felicity gets an office and Ray gets insight into some serious military weaponry, Laurel starts vigilante-ing, Roy and Thea (kind of) make up, and Oliver (kind of) tells his sister the truth… and then Nyssa shows up! And Diggle’s got suscipions about Lyla’s boss/job! Felicity’s heading to The Flash all of a sudden! The momentum in “Corto Maltese” is relentless: but while it certainly diminishes what happens in the context of the episode (again: the ARGUS stuff is pretty clumsy, and given much lighter dramatic weight than I think it’s meant to), it still continues to set-up fascinating and exciting new stories for later this season(like Roy noticing how good Oliver is with a gun, the return of Dark Archer to Starling City, and whatever the League had to do with Sara’s death), an entertaining, if superficial table-setting episode, something that can be expected from a show producing 24 hours of television a year.