As far as narrative detours go, “Sins of the Father” is surprisingly solid. With both the comic book influence and demanding network episode order constantly working against Arrow’s longevity and consistency across each 23-episode season, these kinds of entries—ones that are only tangentially related to the season arc—stick out a lot more if they’re lacking in any way. Thankfully, “Sins of the Father” manages to collate its different moving pieces into an hour that is entertaining and rich enough in story to keep pushing the bad memories of season three to the backs of viewers’ minds (in spite of how immersed the episode is in season three plot territory).

Fathers, as one might garner from the episode title, play massive roles, be they absent fathers or present ones. The main conflict is centered on Nyssa and Malcolm’s fight for the throne of Ra’s, with Thea’s life hanging in the mix and Oliver trying to play intermediary. Father checklist: Malcolm is Thea’s father, Oliver’s father is dead (and so he recognizes the importance of giving Thea the chance to get to know her father better, despite his flaws) and Nyssa’s father is also dead (with Malcolm taking on his mantle). The aspect of all of that that works best in the episode is Nyssa’s realization, upon Laurel’s suggestion, that following in Ra’s’ footsteps is something Nyssa wants no part in. Even if the League is a covert operation that has weird ideas about how they’re bettering the world, Ra’s took it a level too far too often. So, Nyssa’s ultimate decision to dissolve the League entirely is the next huge step in her character arc, showing mental growth in the face of extreme conflict—something that several characters, including Oliver in this episode, get accused of not undergoing. As far as the impact on Arrow and the Arrowverse, not having a League of Assassins is probably not a big deal. The major characters, Nyssa and Malcolm, still have reasons to be occasionally involved, and there are plenty of organizations that can be both boons and deterrents for Star City’s safety. So, to consolidate, Nyssa steps out from under the shadow of her father to become someone else. 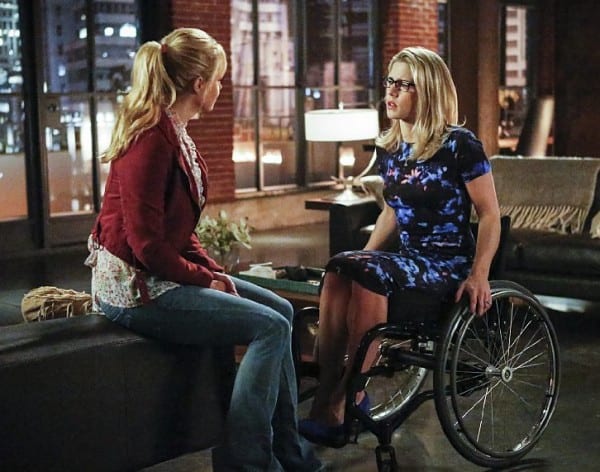 Malcolm, in the role of father, doesn’t fare as well. As much as he makes proclamations about his love for Thea throughout “Sins of the Father,” he puts the potential of the League first. And, once he has lost, he immediately falls deeper into the pitfalls of being Malcolm Merlyn by getting whiny and vengeful, promising Oliver a reckoning (not in those—Slade’s—words, but close enough) and turning around and delivering it straight to Damien Darhk in the form of William, Oliver’s son. Even though this goes against Malcolm’s desire to be a good father to Thea by putting someone else’s son in the firing line, it isn’t exactly out of character for Malcolm, which is why I’m more okay with it as a plot device than I might otherwise be (it’s very cliffhanger-y in that unfortunate way Arrow is sometimes, because it’s constantly trying to figure itself out). If anything, it’s encouraging to see the writing team not leave William hanging after Oliver got to see him on his trip with Team Flash. Barry warned him that time traveling would have its ill effects, and if Felicity’s injury isn’t the only part of that, then whatever happens with William’s story might also make him a victim of circumstance. These issues are less at the forefront of “Sins of the Father” compared to how Nyssa’s interior conflict is externalized, but they show potential to develop over the course of the rest of the season.

The B-story of the episode also ties in to all of this thematically, as Felicity gets to know her own father better—a father who has been absent for 18 years. Again, massive credit to the writing team for making the decision to not drag this out too long and letting Noah drop the bomb of being the Calculator in that first conversation with Felicity. When Arrow blasts through story like that, it’s usually a good sign that the team has something cooking in the near future. There aren’t many things going on in Felicity’s subplot that extend beyond “Yeah, my father is also a bad guy, and I need to convince myself that I’m not like him,” which, really, is enough to warrant its place in the episode. However, Donna Smoak becomes the beneficiary of the whole thing by getting her moment to be a fantastic mother to Felicity, telling her from heavy experience that people don’t change, even if you want them to. Though Oliver is somewhat a testament to the opposite of that sentiment, Donna’s speech is still moving because of how honest and entrenched in Felicity’s safety it is. We know that Team Arrow always has Felicity’s back when she’s put in danger, just like she has theirs, but family is a different sphere of personal conflict to the stuff that Felicity has to deal with when she’s behind the computer. It’s wonderful to see someone like Donna really step up and be as supportive of Felicity as someone like Oliver is (and to see Charlotte Ross completely knock it out of the park with such a small amount of screen time).

See also  How Genre Shows are Getting Female Representation Right

So, overall, “Sins of the Father” finds a worthwhile theme to explore in the midst of several storylines galloping at once and in different directions. It’s still the scenic route on the way to the showdown with Darhk, but the detour features a trial-by-combat between Oliver and Malcolm. It’s hard to complain about that, even if the fight isn’t as epic as it deserves.

A Quiver of Arrows: