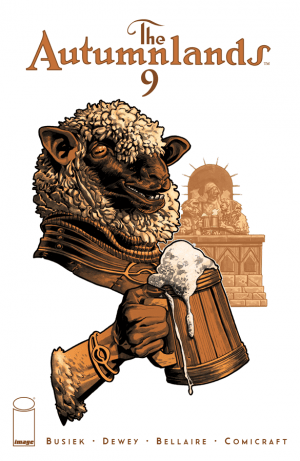 After being separated from the citizens of Keniel, Dusty and Steven Learoyd head to the mountains in search of a way back home. They are ambushed by a group of angry goat men and left for dead. Fortunately, rescuers from the sheep town of Erries bring the pair to safety and ask them to save their home from a plague brought upon by a mysterious glow in the neighboring mountain. Dusty and Learoyd take the task, but what they’ll find may not be what they expected.

The cover for this issue is good, but not very interesting. The Autumnlands’ covers have been praised for artistic composition and use of color. For example, a lot is going on in the covers for issues #3 and #7. Issue #9 doesn’t have much. It’s composed well, but there is no image within an image, dynamic action, or other artsy fartsy styling going on. It’s not a big deal, but fans used to something more impressive might be disappointed.

Fortunately, Benjamin Dewey and Jordie Bellaire continue to demonstrate how they are one of the best artist/colorist teams out there. Benjamin Dewey puts an impressive amount of detail into his art. From the sheep people to the mountains around them, not one piece of scenery is left bland or of less quality than another. Jordie Bellaire’s colors breathe life into Dewey’s art. It pops out like a storybook and enraptures the reader. The only problem with the art is that the children don’t look enough like children. Usually, the reader can tell they’re children because they’re shorter than the adults. In this issue, the reader is introduced to a group of children without adults around and could be easily mistaken for them, given how they look and speak. It might do Dewey some good to look into how he can change this.

The letters provided by Comicraft are their own kind of art. As more and more indie titles veer toward lowercase lettering instead of the traditional ALL CAPS, it’s important that letterers do something more than just the typical computer-looking font. With The Autumnlands, Comicraft’s letters have a looser, wavy look like a handwritten text from medieval times. It’s nothing groundbreaking, but does nicely fit the fantasy look of the book.

The story here takes an interesting turn, as Steve Learoyd, a morally gray and self-serving mercenary, is shockingly friendly and grateful to the sheep people. Not only that, but he chooses to help them for as little a reward as travel supplies. However, it seems that whatever is going on in the mountain might have to do with a clue Learoyd got from the mysterious woman in issue #8. Whether or not Learoyd is turning a new leaf is up to the reader to decide (take your bets).

Dusty also gets a bit of character growth. Once told by his father that magic-free villages outside of the floating cities are inferior, Dusty realizes that although the sheep people aren’t geniuses, they have a stronger sense of community and friendship. Indeed, their simple country life is free of the backstabbing and corrupt politics of the floating cities. Dusty is starting to doubt the conventional wisdom of his people, a challenge that has emerged since discovering the true nature of the Bison tribes. It will be interesting to see how these revelations change Dusty in the long run.

It’s also nice to have a light-hearted chapter. Most of the series has been pretty dark and brutal. In this issue, Dusty and Learoyd spend their time celebrating with the sheep people. Of course, like anything in The Autumnlands, its not what it seems. Erries might look like a nice town, but there is a hint of danger beyond the mysterious plague. In a series built on double deception, the reader best remain alert.

The only thing the reader might not like is that they’ll have to reread the previous issue to understand some bits of this one. Also, they might not like the slower pace of this arc. The first arc pulsated with action and chaos. This one focuses more on exploration and learning what’s up with Learoyd. For those with the patience, Kurt Busiek is promising bigger things ahead that will shake the very nature of the Autumnlands.

Did I forget to mention the sheep people’s dialogue is the most adorable thing ever? Imagine the cast of King of the Hill talking to you through sheepskin. Um, that actually sounds creepy. Never mind.

With detailed art, surprising character growth, and a set up for bigger revelations, The Autumnlands #9 is a satisfying entry in the  smash hit fantasy series. If you’re a dedicated fan, there is no reason you shouldn’t pick up this issue.