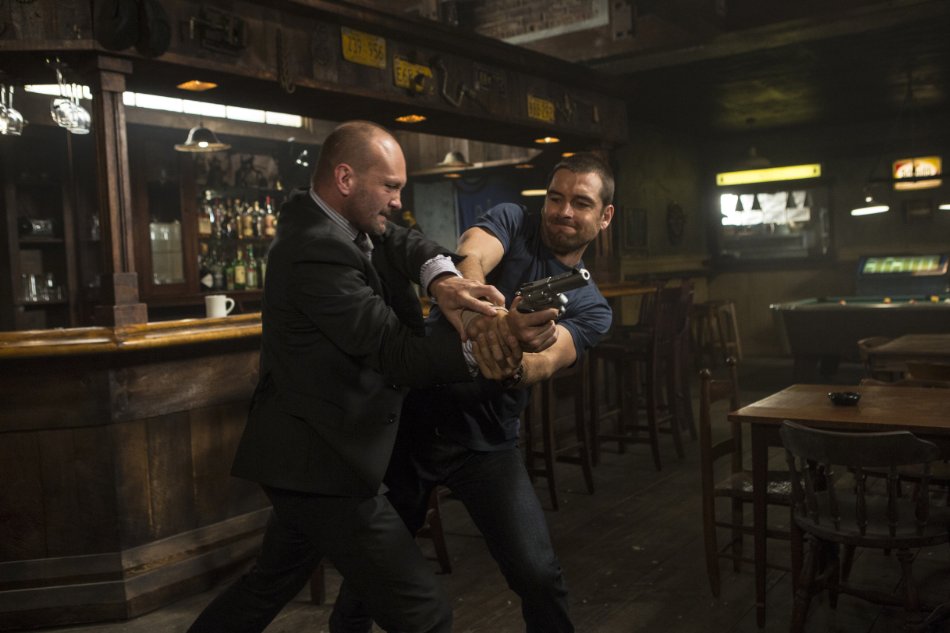 Banshee, Season 2: Episode 6 – “Armies of One”
Written by John Romano
Directed by Babak Najafi
Airs Friday nights at 10 on Cinemax

“I don’t know if anyone ever changes, really. But we can evolve, right? I mean, that’s what we’re trying to do, isn’t it, just become better versions of ourselves?”

Babak Najafi and John Romano absolutely killed it in last week’s episode of Banshee, which is easily – easily – in the running for best television episode of the year. The director-writer pair returns this week in “Armies of One” and delivers something just as powerful and engaging, but in an entirely different way. If “The Truth About Unicorns” felt a lot like a Sofia Coppola film, “Armies of One” finds a home next to the works of Alejandro Gonzalez Inarritu (Amores perros and 21 Grams). Its narrative is much more disjointed than the average Banshee entry, but Romano knows exactly what to highlight for the episode make sense and have a through-line.

The idea of becoming a better version of oneself is something that has haunted Lucas Hood and a lot of the other Banshee characters. When Siobhan verbalizes this to Hood, it’s in the midst of a joint-sequence that follows both Hood and Jason. That idea, though, applies to everything that is going on in “Armies of One.” Granted, we don’t really know what Jason is like before we see him roll into the town, but we get the sense that he’s remained the same kid since Oregon – someone who doesn’t quite understand the consequences of his actions enough to find a resolution for himself (Hood has to bail him out here). Within the world of Banshee, those who are not aiming to be better versions of themselves get punished; in this case, Jason gets the death penalty. After losing Racine last week, Jason’s death is slightly less surprising, but this is – again – a case in which a plotline that certainly had long-distance legs is getting cut off, perhaps prematurely. How Jason would have gelled with the rest of Banshee going forward is totally questionable, though, so using him to echo his real father and to bring out some more of Hood’s personal codes is effective enough.

Hood’s codes also fall into the category of trying to be a better version of himself. He won’t admit that sticking his neck out for Jason is entirely selfless; he will, however, say that he owes the real Hood that courtesy. When the fake Hood came into town to begin with, he had no allegiances outside of his desire to re-connect with Ana. Since then, we’ve seen him open up and embrace the help and responsibility of other people. This is, by definition and circumstance, Hood improving himself (intentional or not). And if that is part of the law that governs Banshee, it makes more sense that he is still alive, despite everything and everyone that should have killed him by now.

Getting back to how “Armies of One” plays out, it’s kind of ridiculous how versatile both the series and Najafi-Romano are. This is the antithesis of “The Truth About Unicorns” – all the things one would expect to see in a Banshee episode are here. Yet, somehow, the same creative team tackles the material without showing any signs of weakness. If the fight between Quentin and Hood isn’t quite as long and intense as a normal Banshee fight is, it’s still just as brutal and striking. There were several callbacks to earlier episodes of this series, and having a few semi-trucks rush past those characters on the highway brings to mind the flawed and underwhelming pilot that started this whole thing. But when Quentin’s head gets the clean cut, the differences between where Banshee started and where it has ended up are entirely clear. So much of what Najafi does with the camera is well beyond any expectations that exist for a television series. When Burton comes in to clean up Jason’s hotel room, for instance, so much is at work – the music and how it stops abruptly, the flashbacks to Burton’s past (of all the periphery characters in Banshee, Burton was the last one I expected to see get this kind of treatment; Matthew Rauch is absolutely perfect in this sequence, shifting facial expressions and turning Burton into more than just a caricature). Every aspect of “Armies of One” – from the action to the quieter character moments – is handled with respect and care and ingenuity from the team that took Banshee in a completely different direction last week.

Plot-wise, there’s a few other things that “Armies of One” introduces, most notably the alliance between Proctor and Alex and an expansion on the relationship between Proctor and Rebecca. I got to watch this episode with a few people who had not seen a single episode of this series, so I tried to approach it from that perspective. And in that way, some of the Proctor side of the episode didn’t stand out in the same way that the more concise Hood-Jason stuff did. There is still gravitas attached to that handshake between Proctor and Alex, though, especially given how we see Alex’s troubled reaction afterwards. Similarly, for anyone who doesn’t quite understand what’s going on between Proctor and Rebecca, the scenes in which she walks in on him and he walks in on her work well enough to suggest how murky that relationship is. Even for longtime viewers, there are a lot more questions there than answers, and those questions elicit interest rather than annoyed confusion.

Ana and Gordon, too, get short, effective material in “Armies of One.” Rus Blackwell especially gets to shine as the broken husband, incapable of being that better version of himself as he stumbles in drunk after another night at the strip club. Of all the Hopewell members, however, it’s actually Deva who makes that step in reaching out to her mother. This gives Deva a much stronger place within the series, avoiding being relegated just to rebellious teenage daughter. The Hopewell family needs much more time and perspiration to get back to some kind of semblance of its former self. But now that Ana is back in Banshee and now that Banshee has slammed its fist down with intelligent balancing and development of stories, things are only looking up.