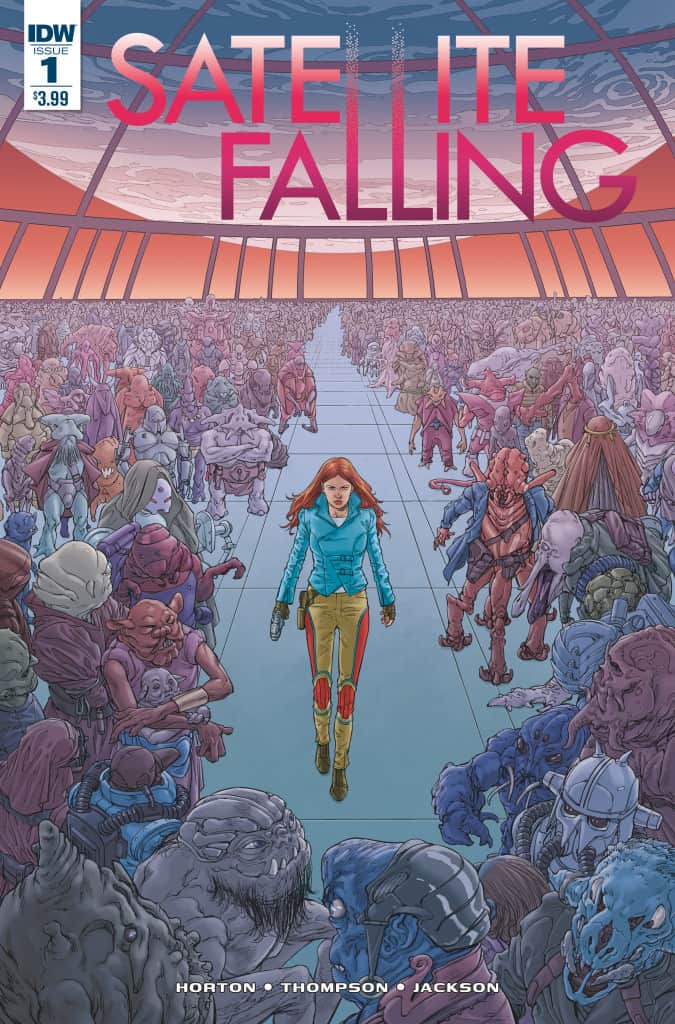 Since this is an advance review, I promise to keep it spoiler free. But I really want to tell you all about the wonderful details of Steve Horton’s new series for IDW. The story, the setting, the characters. The twists on familiar tropes. That will all have to wait until you can pick it up and read it too. Trust me, you’ll want to do that.

Instead, let me tell you what the series reminded me of. Firefly. Bitch Planet. Blade Runner. The Maltese Falcon. The Fifth Element. Maybe one of those is a favorite of yours? Maybe all? But Satellite Falling isn’t a rehash of any of those; it just shares a particular characteristic or two. A tonality. A character type. An aspect of setting or plot dynamic. It lives in that sweet spot between being unique and familiar, making it particularly pleasurable to read.

Here’s the set-up: Lilly is a fish out of water as the only human being living on the planet Satellite. She’s running away from a painful trauma, the loss of her love Eva. (Here, if this were a longer review, I might delve into the significance of naming these two women derivatives of Eve and Lilith, the two first women in Judeo-Christian tradition. Instead, I’ll leave that for you to ponder.) Lilly is a bad-ass bounty hunter with a heart of gold. She’s Malcolm Reynolds in Kaylee’s body. She works on contract for the local police force, but her skills make her too valuable to leave as a free agent and she gets forced into a job she doesn’t want but now can’t let go of.

The story’s core most reminds me of detective noir. Lilly’s a lone wolf with street skills and a buried nobility. She narrates the story to her lost love and has a complicated relationship with the police. She’s cool and effective. Her neutrality to crime and punishment gets compromised in this opening issue, pulling her deeper into a corrupt underworld.

Issue #1 leaves Lilly invested in her new world in a way she hasn’t been since she lost Eva. She’s reconnecting and finding being knee-deep in giving a crap is messy business.

Stephen Thompson proves himself a master of world-building with Satellite Falling. The multitudes of alien species surrounding Lilly create a clear environment for her to be other in. The buildings and cars, clothing and weapons, interiors and exteriors all have a mix of the alien and the Earthly, tying the world to the Earth we know but showing the advancement in time and distance in space. Combined with the sky-hues coloring by Lisa Jackson, this series is a joy to look at. Jackson’s colors mimic sunsets and twilights, giving a soft beauty to a harsh, alienating world. 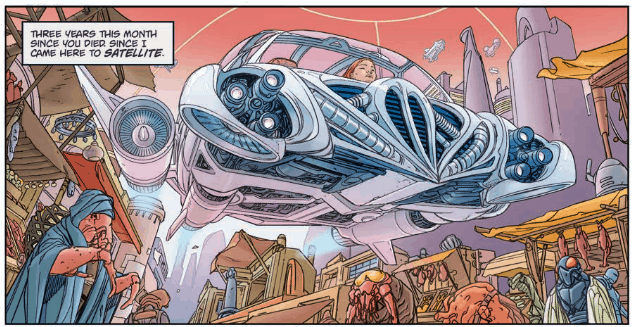 Satellite Falling grabbed me immediately with its complete lack of white men. It manages that trick by making Lilly the only human on planet and giving her a black woman for a lost love. Certainly there are masculine aliens, but their strange appearance makes them novel. Gender is openly played with through alien biology and holographic technology. While I don’t know that feminism is an explicit theme of the series–the potential exists for a subversive portrayal of the constraints of human dichotomies. The series clearly offers a gender-flipped version of detective noir like Blade Runner and The Maltese Falcon.

Satellite Falling charms the reader within the first few pages with its Samantha Spade protagonist navigating a strange new alien-filled world. The lush color palette on an imaginatively constructed setting elevates the engagement and enjoyment, while an action-driven plot makes reading both fast and fun.